Posted on November 5, 2014 by Lina Goldberg
Get a quote for expat health insurance

Here in Cambodia, Water Festival, or Bon Om Touk, is upon us. The Tonle Sap and Mekong River are the heart and soul of Cambodia; every November the Tonle Sap changes its course and Cambodians gather in Phnom Penh and Siem Reap to watch boat races to mark the occasion. This year, the celebration takes place on November 5th, 6th, and 7th.

Water Festival gets a bad rap amongst expats. The week leading up to Water Festival is affectionately referred to as “robbery season,” because so many bag-snatchings take place. Every year, millions of Khmers from the countryside flood Phnom Penh (and to a much lesser extent, Siem Reap) and the streets are packed with families who have set up camp on the sidewalk, sometimes days in advance, waiting for the festivities to begin. Unsurprisingly, petty crimes rises when the city is flooded with poor relations.

This is what expats usually gripe about: the streets are packed, traffic is at a standstill, stores are closed, and crime is up. In 2010, there was a stampede during the Water Festival on Koh Pich in Phnom Penh that killed more than 350 people. There hasn’t been a Bon Om Touk celebration in the city since then, until this year.

But the Water Festival also offers a glimpse of Cambodian culture that shouldn’t be missed. If you’re in Phnom Penh, head to the riverside to watch the boat races. They have special grandstand seating set up for foreigners–or anyone willing to pay to sit there–that have unobscured views of the river. If you’re planning to head into the crowds, leave your valuables at home but bring sun protection and water. Once you find a seat you’ll probably not want to leave. In the evenings, there are fireworks.

Savvy Phnom Penh expats head to riverside apartments to watch the races. If you don’t have friends with a riverside balcony, considering getting a hotel room for the day. Check out the sign up using the code MTCAM you’ll get a $15 credit (and so will we!). Agoda also often has good same-day deals on Phnom Penh riverside hotels. 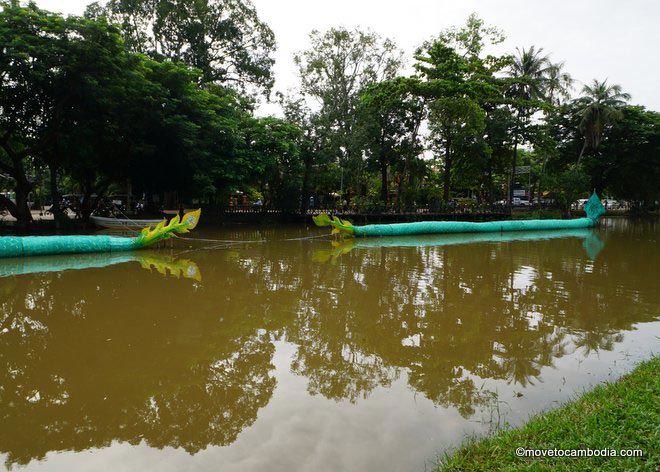 Siem Reap’s sleepy river in the days leading up to Water Festival.

Water Festival celebrations in Siem Reap are much less crowded but just as enthusiastic, with a carnival-like atmosphere, games and rides. Boat races are on today and tomorrow, with 34 boats set to compete. Like the festival itself, the boats in Siem Reap are smaller but no less colorful. At night, there are floating candles and fireworks.