Posted on July 3, 2013 by Lina Goldberg
Get a quote for expat health insurance

There’s a new arts guide out in Cambodia–every week Kumnooh sends out a free newsletter that details the upcoming arts and cinema events in the country. 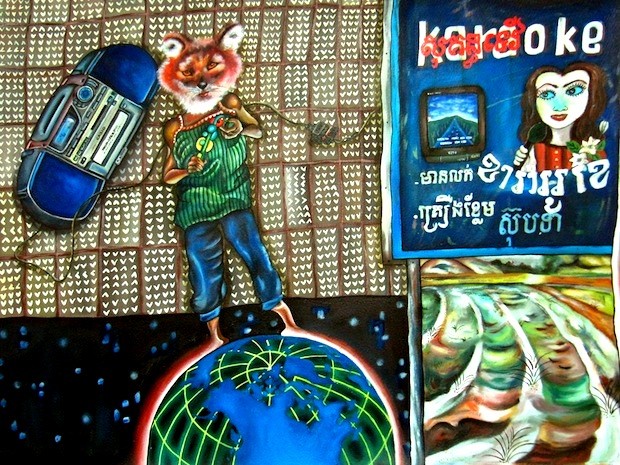 Karaoke by Oeur Sokuntevy, part of the Art Olympics Project at Meta House.

We caught up with Kumnooh’s creator, who goes by the nom de plume Fabian Hipp. After 40 years in Australia, Fabian first moved to Cambodia in 2008. He’s excited about the burgeoning arts scene here, and hopes you are, too!

MTC: What’s the arts scene like in Phnom Penh?

That’s what Kumnooh is attempting to find out. I’ve been active in the music scene in Phnom Penh for years, but I haven’t been making the effort to soak in the wider arts scene. By making sure that I know what is going on in visual arts, dance, literature, cinema and so forth on a weekly basis, I’m becoming more aware of the richness of activity.

Most weeks one can get out every day to an exhibition opening or performance or workshop, collaborations of all kinds. Many would be surprised at the depth and breadth that is currently available.

What is Kumnooh and where did you get the idea for it?

Kumnooh–Khmer for “picture”–is a weekly email that hits inboxes every Tuesday giving a brief overview of the arts-related events of the week to come, reminders of upcoming events (trying to encourage a practice of buying tickets early), links to media on the broad Cambodian arts scene, and a listing of ongoing exhibitions and workshops. There is an tips for tuk tuk directions, etc., which can be useful for newcomers).

The aim is to use the flexibility and accessibility of email to disperse comprehensive information on a tight turnaround, without the deadlines of print media. I was inspired by LengPleng.com, the prompting of Dana Langlois at JavaArts.org, and a sense that there was more I could be seeing and experiencing if only I got out more often.

Is the arts scene mostly expat driven or are locals participating as well?

Interestingly, while the music scene is quite cohesive, at least in rock’n’roll terms (thanks in no small part to Kumnooh’s long running sister publication LengPleng.com), it remains quite segregated in terms of tastes and venues. Quite the opposite is true in the broader arts, particularly visual arts, cinema and dance where the focus tends to be on local artists. The exception here would be photography.

What the arts misses is that sense of cohesion. Individual venues or groups often have excellent communications materials but they struggle to break outside their existing networks. So this is part of what Kumnooh is attempting to do, drawing on the example of LengPleng.com, which a handful of years ago helped to transform the rock’n’roll scene by creating a conversation between performers, venues and audiences.

Can you tell me a little bit more about the rebirth of Cambodian contemporary arts?

I’d have to get back to you on this. I’m only on the periphery, excitedly looking in, and I still don’t know much. I’m just trying to bring people together.