Posted on December 14, 2020 by Susan Haythorpe
Get a quote for expat health insurance

Looking out your window it’s easy to overlook the fact that a trove of heritage buildings lurk beneath the mushrooming high rises. Phnom Penh’s streetscapes can be a voyage of architectural discovery, and Khmer Architecture Tours, a local non-profit organization, offers the chance to know more about Phnom Penh and its history is by exploring its distinctive and diverse architecture. 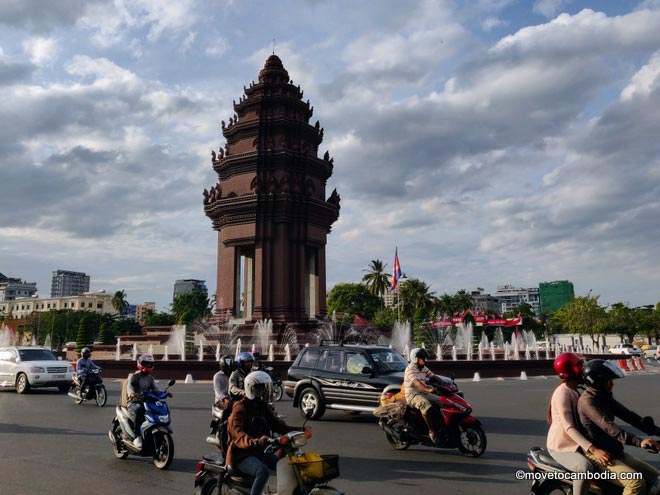 The city’s surviving colonial villas are a notable part of its urban landscape, but equally if not more deserving of attention are the modernist buildings in the style known as New Khmer Architecture. It’s this home-grown school of architecture that Khmer Architecture Tours is particularly keen to spotlight.

The tours are hosted by young Khmer architects or architecture students, who are as enthusiastic as they are knowledgeable. As we trundled in a tuk tuk down Russian Boulevard towards our first port of call, our guide filled us in on the history of what we were about to see. 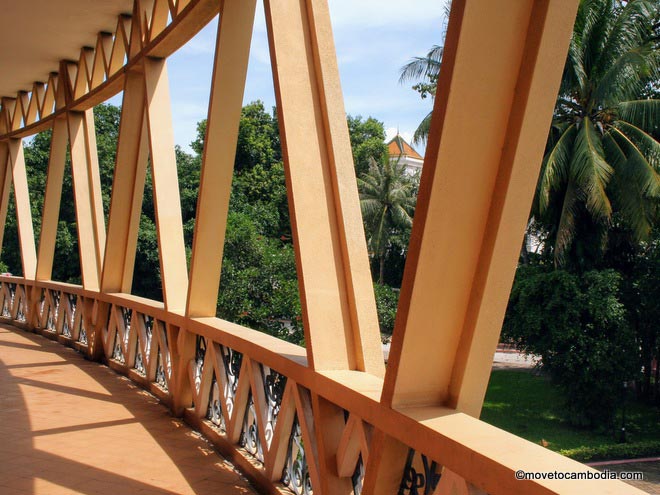 Chaktomuk Theatre on the riverside is a fine example of New Khmer Architecture.

Cambodia’s modernist movement, led by Vann Molyvann, the prolific architect behind the Independence Monument and riverside Chaktomuk Theatre, was conceived in the mid-1950s after the ‘King Father’, Norodom Sihanouk, successfully won Cambodia’s independence from France. Sihanouk set about reforming the capital in a way that would distinguish it from the old protectorate days, including a dramatically new kind of building design.

Inspired by architects like Le Corbusier, the exponents of New Khmer Architecture favored concrete construction and borrowed practical and decorative elements from traditional Khmer houses and temples to achieve a singular style where, in the Bauhaus tradition, form followed function. 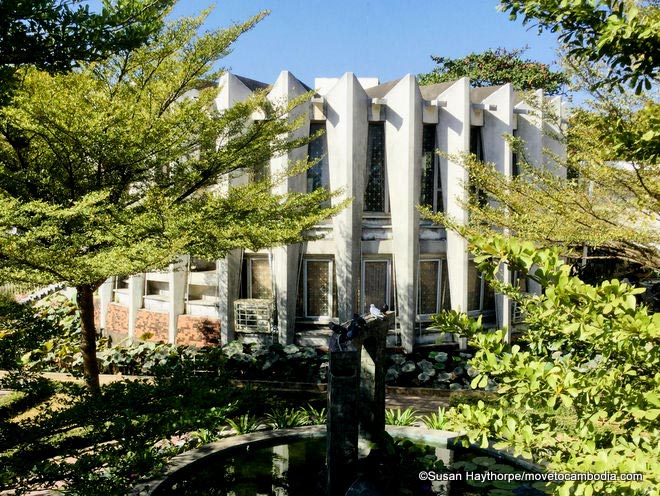 The University of Phnom Penh’s Institute of Foreign Languages.

Particularly fine examples are found at the University of Phnom Penh’s Institute of Foreign Languages. I remember an intriguing glimpse of these buildings, almost hidden within their landscaped gardens, on my first ever journey from the airport into the city, so it was a treat to be able to wander round the campus and into some of the buildings to admire the features up close.

This idiosyncratic architectural style is superbly suited to the climate. Careful orientation together with design elements like high, arching roofs; stylized air bricks and brise soleils; and the presence of water for its cooling as well as aesthetic properties, promote an abundance of natural light, shade, and ventilation. Few of the university buildings have seen any refurbishment or modifications and it’s a tribute to the outstanding design and quality of construction that they still appear remarkably contemporary and fit for purpose. 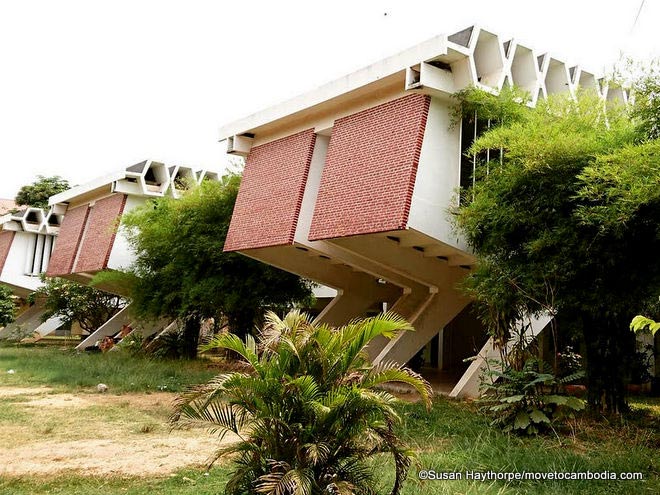 New Khmer Architecture spotlight at the University of Phnom Penh.

Our next destination promised a very different aspect of Phnom Penh’s post-colonial revamp: the 100 Houses Project, an innovative scheme to provide new, affordable family homes for the employees of the National Bank of Cambodia.

Most of the houses have since been made over by their new owners but enough remain sufficiently intact for us to observe the way Molyvann customized the traditional Khmer stilt bungalow as a template for modern, urban living. 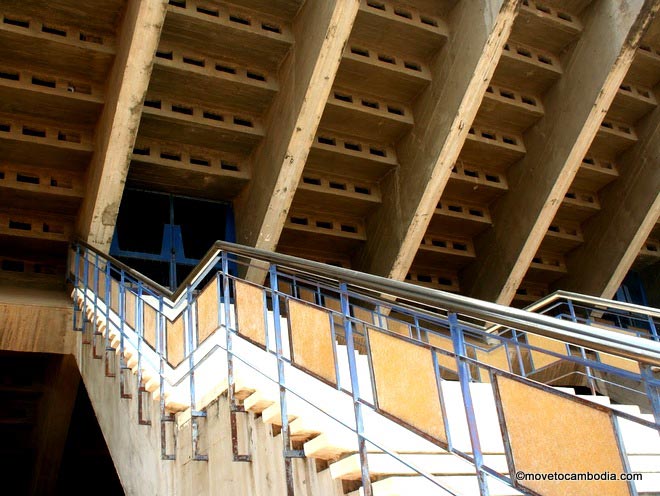 Molyvann’s National Sports Complex, a.k.a. the Olympic Stadium (which, incidentally, has never hosted an Olympic event) is closed to the public in the mornings so it’s well worth taking an afternoon tour for the chance to peruse Phnom Penh’s most impressive achievement in modernist architecture with a clued-up guide to navigate and answer questions.

Development presents an ongoing threat to Phnom Penh’s built heritage. Like their colonial counterparts, many of the city’s modernist treasures have been demolished. Earlier this year Vann Molyvann’s last, self-designed abode in the capital (the architect died in Siem Reap province in 2017) was placed on the market for a cool $7 million — a hefty price tag for a property that has seen much of its original character disguised by years of modification. Will any hero investor step forward to save this piece of Phnom Penh’s unique architectural heritage? 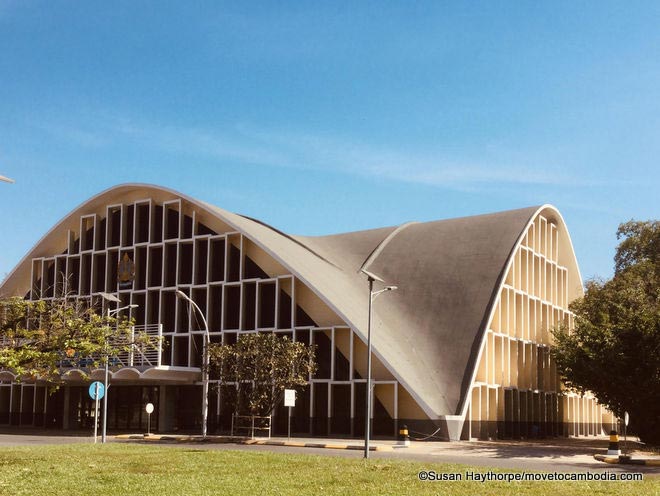 The curvier side of New Khmer Architecture at the Institute of Foreign Languages.

Khmer Architecture Tours operates three different itineraries. We took the tour, New Khmer Architecture of the 1960s. Also available are Central Phnom Penh by Cyclo, a tour of colonial landmarks plus some modernist and religious buildings, described as ‘a brief historical introduction to the city’; and Four Religions of Phnom Penh, which focuses on sites of worship. A rotating schedule of public tours take place on Sundays, cost per person $15.

Private tours can be arranged on any day of the week with a choice of transport and home pick up included. We booked a half day, private tour by tuk tuk, total cost $60 ($45 + $15 for the tuk tuk, which takes up to three people plus guide).

Further information and price list at ka-tours.org and via email [email protected]

The Vann Molyvann Project was set up in 2009 to document New Khmer Architecture and promote the preservation of Cambodia’s modernist buildings. Its researchers have produced numerous architectural drawings and models.