Posted on May 24, 2013 by Lina Goldberg
Get a quote for expat health insurance

Move to Cambodia is pleased to announce the first column of our Siem Reap art correspondent, Gladys Hallwall. Gladys is a part-time Siem Reap resident who spends her time visiting art galleries and passing judgement. Read on to find out what happened to last year’s galleries and for Gladys’ take on today’s art scene in Siem Reap.

“Twelve months ago one could easily spend a glorious afternoon trekking the vast Siem Reap art scene with an abundance of elegant venues to choose from. Ranging from pretentious art spaces in self-proclaimed 5-star properties, to quirky hidden gems in refurbished 1920’s colonial buildings, there was always a different experience waiting for you and an exciting buzz in the artistic air. 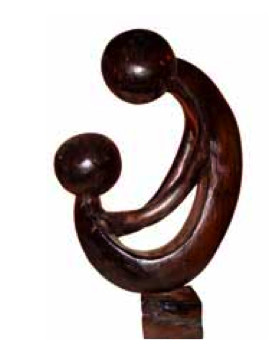 Mother’s Love by Tor Vutha. Part of a series of wooden sculptures, a tribute to the artist’s mother and her unconditional love for him and his 11 brothers and sisters.

A refreshing change from the usual cut-throat art scene (think New York/Paris/London), galleries in Siem Reap promote each other emphatically. When you are in one, you are encouraged you to visit the next with the usual friendly disposition synonymous with Cambodia. With the spectrum of artistic voices ranging from fine art photography to mixed media creations to contemporary and experimental art, one could not fail to be impressed with what this little tourist town had to offer. Fast forward to 2013 and the pace seems to have slowed significantly; four galleries closed their doors within a six month period.

The first to close was the extremely successful and highly popular Arts Lounge at Hotel De La Paix. With exhibition openings every three or four months, this was a big blow to the local expat community in as much a social sense as a cultural one. While everyone was fully aware that most of the art shown here didn’t actually sell (apart from the last show with work by Kampot-based French Artist Vincent Broustet almost selling out and perhaps a couple of local NGO paintings by children), everyone enjoyed the openings immensely mostly due to the subsidized glasses of mediocre wine and free canapes that were served.

The Arts Lounge was an extremely pleasant gallery to visit, one could gladly escape the raging heat outside, enjoy cool air-con and perhaps treat oneself to a delectable ice-cream from the adjacent cafe. unfortunately Hotel De La Paix was bought out by the Park Hyatt Group and the property is currently under construction. While it has been confirmed that the refurbished building will house a gallery, it will not be to the scale of its predecessor. No one seems to know what style of gallery it will be nor is anyone aware of when this fateful day will come (March, 2013 was the initial opening date).

Hot on the heels of the Arts Lounge was the closure of the Friends Center Gallery at Angkor Hospital for Children. Actively promoting both established and emerging Cambodian artists such as Ot Veansa, Tor Vutha and Srey Bandaul, the unfortunate end of this particular gallery came in the wake of a dengue fever epidemic in 2012.

While the gallery was not an actual part of hospital it was within the grounds and served as the official Visitor Center for the hospital. It was primarily conceived with the vision of promoting awareness and raising additional funds for the hospital. A high percentage of the art sales went directly to Angkor Hospital for Children with the remaining percentage rightfully going to the artist. The building was designed by trendy New York architect firm Cooke+Fox and was paid for with funds (all $250,000 of them) provided by Sterling Stamos Capital Management.

As the hospital was excessively over capacity and in desperate need of extra bed space during the dengue fever outbreak, the gallery was transformed into a vital staff training facility, while the original training rooms were converted into makeshift wards for the growing number of young patients. After two months of careful deliberation, the decision was made not to re-open the space as a gallery. It would remain an educational facility for the onsite trainee doctors and nurses. While one cannot argue with such a decision, especially when it comes to the essential medical needs of children, it was a huge shame to see such an impressive, and expensive, purpose-built gallery space close.

Three months later saw the demise of the ‘too cool for school’ Art Deli. Located in one of the most sought after premises on Alley West, this gallery/bar/community space/shop was more of a breeding ground for newly arrived feel-good NGO workers and unqualified English teachers. A hugely promising space adorned with work from local artists such as Oun Savann, Art Deli was doomed to fail due to a severe lack of care. Untrained clueless staff were left to run the ailing business, a massive mistake. They could sell you a bottle of water but ask about a specific painting or artist and one could instantly feel the fear of the sales assistants. Education and training are essential in the art business and this place fell far short of where it could and should have been. Still, it was sad to see it close its doors.

Having officially opened in March, 2012 with an excellent exhibition by Italian photographer Paolo Patrizi, it was a real shock witness the popular Angkor Photo Cafe-Gallery close towards the end of the year. Being the official headquarters for the excellent annual Angkor Photo Festival, one could be forgiven for holding out real hope for survival of this gallery. Located along the hip Siem Reap riverside, this gallery had access to an enviable array of professional photographers through their extensive network. Angkor Photo Cafe-Gallery was able to successfully showcase very impressive international artists. Luring patrons with regular salsa workshops, tapas evenings, themed events, etc the charismatic manager and well trained staff were aptly suited to their duties. Sadly, it was a simple case of the landlord deciding not to renew their lease on the premises.

For the few remaining in galleries in the dusty little town that is Siem Reap, there is hope. McDermott Gallery opened a new exhibition space in August 2012 at Raffles Grand Hotel d’Angkor (that makes three for those of you counting). The highly-coveted fine art prints by American photographer John McDermott continue to wow viewers and be the staple art fix for most visitors. Theam’s House impresses guests with Cambodian artist, Lim Muy Theam’s ongoing dedication to beautiful clay pieces of local species and exquisite lacquer work. The often overlooked Alliance Cafe and Gallery is still going strong with it’s permanent exhibitions by Battambang artist Mao Soviet and Vincent Broustet and the funky 1961 gallery/hotel is also thriving through it’s ability to snatch up works by travelling artists and occasionally shows some local talent.

It seems baffling that a small town that hosted over 2 million visitors in 2012 can’t accommodate more of a prominent and steady art scene. A void has been left with the closure of these galleries, mostly due to the lack of professional venues left to showcase the exceptional talents of both Cambodian and expat artists. With an even larger increase in tourists forecast for 2013/2014, surely there is room for at least couple of exciting galleries to open and give Siem Reap a well-deserved shot at being a significant art community once more.”