Posted on October 5, 2021 by Pete Ford
Get a quote for expat health insurance

Battambang’s main tourist attraction doesn’t feel like it is resting during the pandemic. At least, the poor souls toiling away in front of Phnom Sampeou’s famous bat cave certainly ain’t resting. They’re busy chiseling a giant Buddha into the exposed limestone. And while the ongoing work is an impressive feat, it adds yet another layer of human adulteration to this beautiful rocky protuberance in the middle of otherwise (mostly) flat Battambang province; for Phnom Sampeou offers an architectural, archeological and zoological slice of humanity in Cambodia. 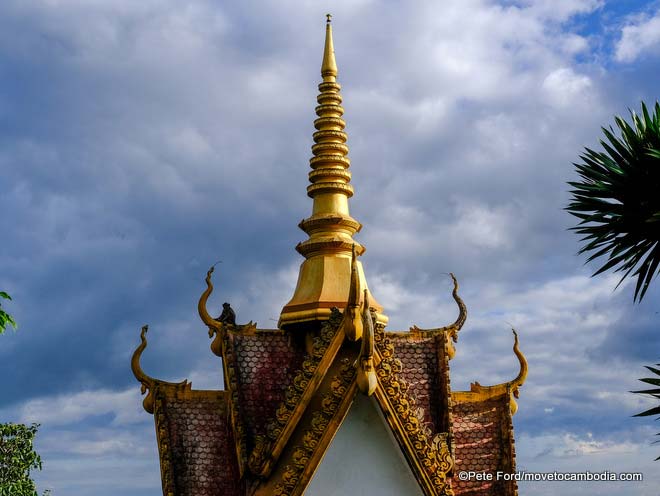 A monkey on top of Battambang’s Phnom Sampeou.

The top is covered in an eclectic variety of Buddhist temples, shrines, stupa, and sculptures in Chinese and Theravada Buddhist styles…dotted among the trees with no apparent plan other than to provide a blast of color at every turn. There are military remnants — in the form of two rusting field guns — of Cambodia’s protracted efforts to defeat the Khmer Rouge, now simply another plaything for a bold macaque colony that calls the hilltop home. 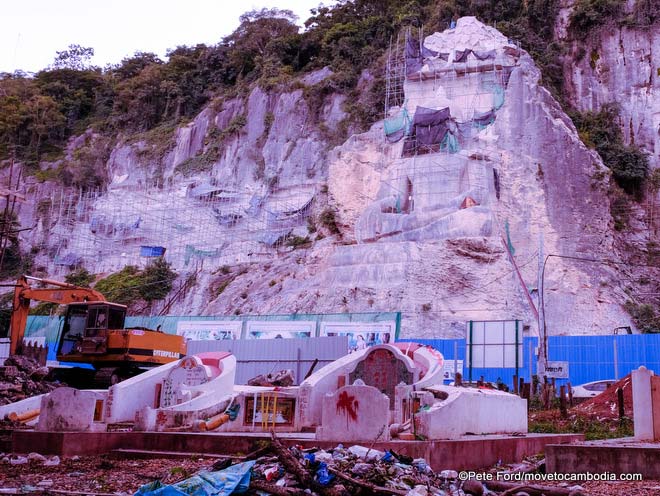 Hard at work carving a giant Buddha into the rock face of Phnom Sampeou.

And the Khmer Rouge impact on Phnom Sampeou is much darker than this.

A short walk away from the main temples and monkeys, lies the killing caves, where victims of local Khmer Rouge forces are said to have been pushed to their deaths. After passing a statue park depicting Buddhist hell in all its gruesome glory (connoisseurs of the genre should add Haw Par Villa in Singapore to their travel lists — Tiger Balm money, tortoises riding on the back of ostriches, and great attention to detail of Buddhist hell, a must-visit spot in the city state), the next gauntlet to run is the gaggle of local kids offering their services as tour guides. 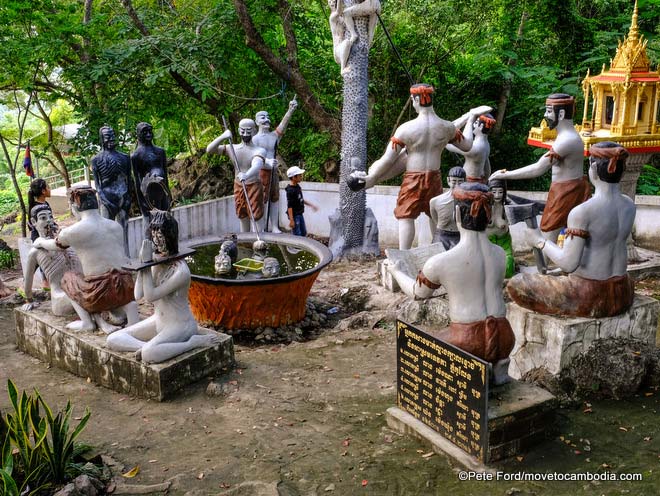 I declined their services, but was able to eavesdrop on some of the tour a Japanese mother and daughter received from the skipping and giggling youths recounting lists of numbers of dead, miming actions of execution with big grins on their faces. Descending into the cave, there are the paraphernalia of many modern Buddhist sites: a recycling Buddha statue, a donation box, an odd assortment of LED lights in all shades and colors. Except here also sits a small glassy stupa filled with human bones. 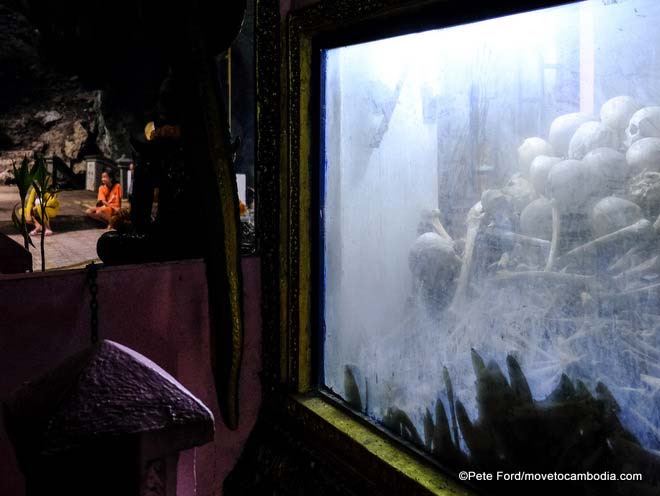 Human bones from the Khmer Rouge era at Phnom Sampeou.

It is hard to fully comprehend what must have occurred here — 360 degree views of rice fields and nature, the chanting of lay monks, the wafting of incense and the bustle and chatter of local families on weekend excursions. 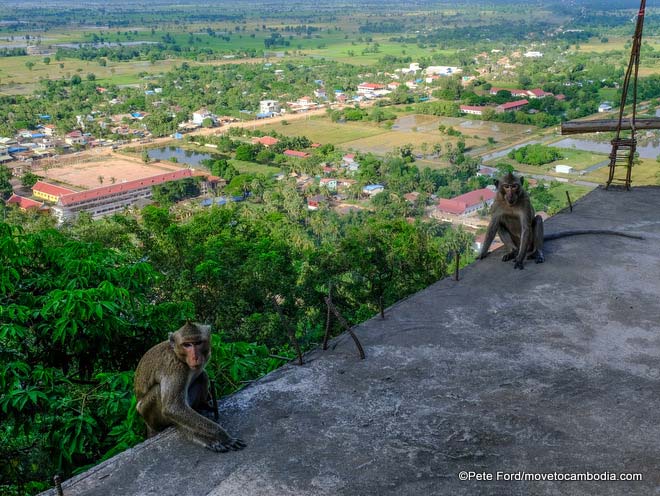 The view from Phnom Sampeou.

Phnom Sampeou lacks any Angkorian temple remains, but fear not as the only other hill in sight, Phnom Banan, is adorned with a small temple. Started in the 11th century and finished 100 years later, the main draw here is the view, rather than the rather ragged and looted remains, reached after a short but intense climb up some very steep steps. 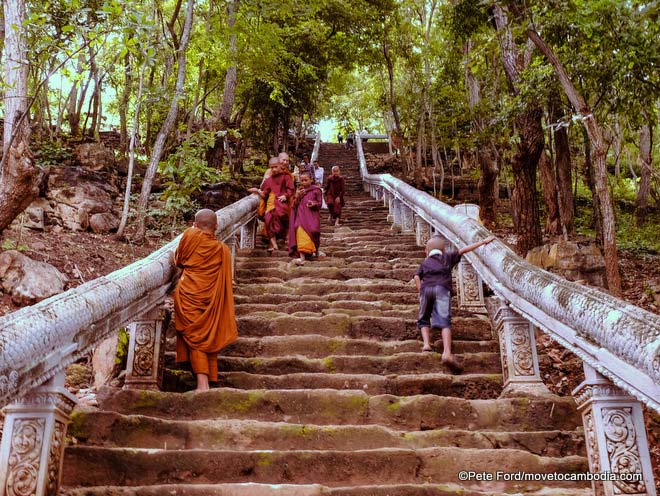 The stairs up to Battambang’s Phnom Banan.

At its base sits the relocated “bamboo railway” that was once a staple tourist stop in Battambang. What used to be a legitimate method of transport for rural communities to make use of the underused Northern railway line — using a small engine on a bamboo structure to power along the lines — has now morphed into a separate amusement following the renovation to the route in anticipation of resumed rail traffic. Already aimed squarely at young Cambodians (before Covid-19 meant many other tourist sites had to adapt) this rural setting is home to an Amazon Coffee, loud music and bamboo huts next to an artificial lake, the perfect way to blend the excitement of the train with a bit of nature. 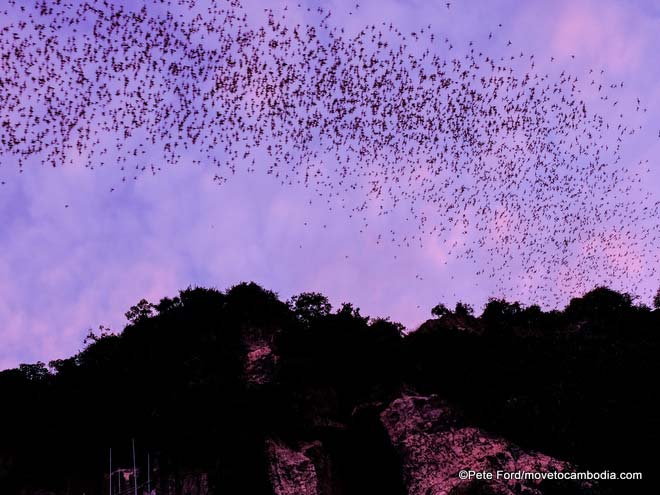 The nightly flight of bats from Phnom Sampeou start around 6 p.m.

But for real natural experience, it’s the sunset release of bats from Phnom Sampeou. As the sun dips behind the hill, a stream of bats emerges in an apparent endless outpouring. It’s a nightly occurrence, and plastic tables and chairs set up underneath offer ringside action. It’s an act of natural splendor that no number of statues or temples on the mountain can match — and one that will hopefully continue regardless of whatever is carved into the cliffs adorning their cave home. 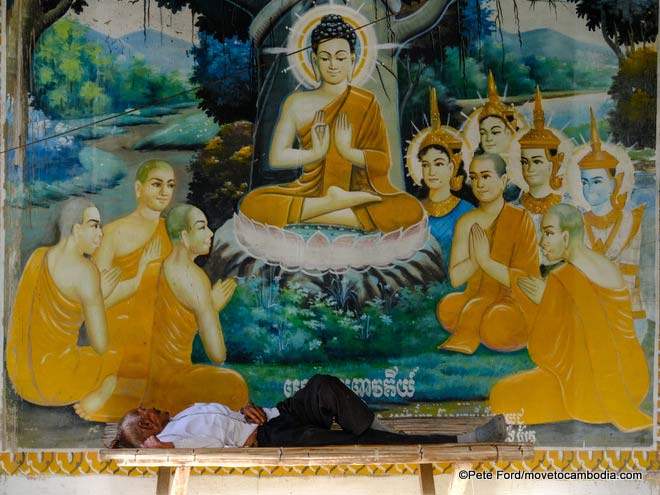 A moment of calm at Phnom Sampeou.

Tickets cost $3 and will gain you admission to both Phnom Sampeou and Phnom Banan.

Tuk tuk drivers will happily combine both hills on a half-day trip of Battambang, possibly stopping at Cambodia’s only vineyard on the way for an unexpected additional tourist attraction. A half-day or day tour usually costs between $15 and $40, and your tuk tuk driver will happily act as a guide. We’ve got a list of recommended Battambang tuk tuk drivers.

Alternatively, most hotels and guesthouses can arrange a moto for rent, with Phnom Banan being reached in less than an hour from Battambang, following the lush riverside south.

For more sightseeing, have a look at Battambang’s under-visited gems and Things to do in Battambang.