Posted on July 2, 2021 by Pete Ford
Get a quote for expat health insurance

Wondering why you should visit Battambang? Since the 11th century, Battambang has been an important city in what is now northwestern Cambodia. For at its founding, the power of the kings of Angkor extended much further to the north and west. At other times, Battambang found itself as a majority Khmer city in eastern Thailand. 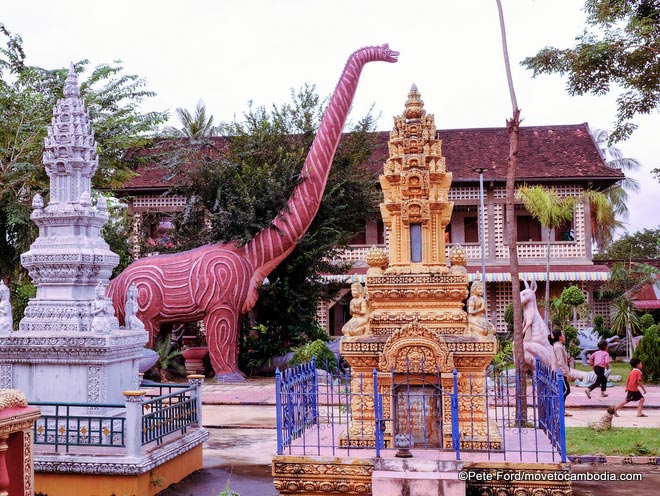 Religion and history combine for a visual delight at Wat Pnuw, even if the scales are slightly off.

All of that goes to say that Battambang and its surrounds are full of beautiful examples of this rich history covering multiple architectural styles. While lacking the splendor of major Angkorean cities, or the modern economic importance of Phnom Penh, Battambang is a fascinating place to visit, as it has managed to retain a uniquely Cambodian charm that in the capital and on the coast is quickly being replaced by glass-fronted towers. And it has dinosaurs, of course.

There is nothing to signpost Wat Pnuw’s delights, 5km northeast of Battambang city, and for all intents and purposes it is just another countryside wat, and yet, its dinosaur collection is surely unique. As is the giant depiction of Buddhist hell, also brightly colored and highly visible, which must put a slight damper on some children enjoying the dinosaurs too much.

It’s about 500m north of the much more famous Wat Samnong Knong, (my actual destination) but the towering purple heads of two diplodocus clearly invited closer inspection. With no one but young children playing around, it was impossible to ask why any of this, which had clearly been recently built, actually existed. 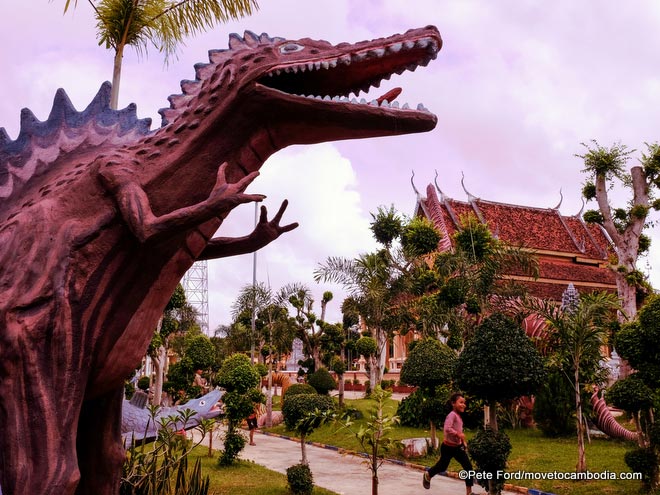 While unclear if such a beast ever roamed prehistoric Cambodia, its now found a home in the Kingdom of Wonder.

And a few other questions sprang to mind:

Why spend all this time and concrete?
What was your source material for the dinosaurs as some look of questionable provenance?
Why is there also a kangaroo?
What is the Theravada teaching on evolution (and kangaroos)?
Are the artists available for commission?

Lacking any answers, and with the garish colors causing slight ocular pain, the nearby somber grounds of Wat Samnong Knong offered respite, with its sprawling collection of temple buildings young and old, a collection of graves of a thriving Chinese-Cambodian community, and a bone-filled Khmer Rouge memorial. 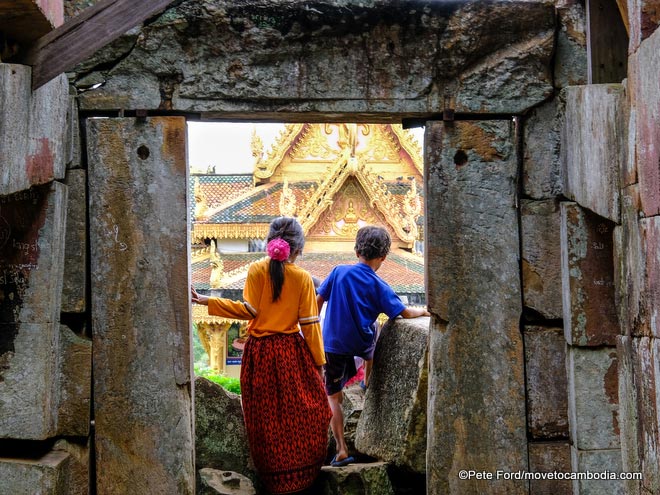 Local kids scrambling in the ruins of Angkor-era Samnong Knong, with the new temple in the background.

While the religious buildings are interesting to explore (and observe a never-ending stream of staged engagement photos), it’s the Khmer Rouge history that is most poignant. Annotated murals around the boned-filled memorial paint a gruesome picture of hardship and death for the many victims of local cadre ire. With a lily filled pond nearby, and largely surrounded by farmland, the contrast of life and death is hard to miss.

It’s also hard not to mull man’s inhumanity to man after such a visit, but on the meandering moto ride back into Battambang, passing traditional stilt houses and other vestiges of Cambodia that offer a feeling of timeless. While rural inequality and the hardships of a farming life are nothing to be romanticized, the narrow tree-lined roads along the banks of small rivers and streams offer a pleasantly gentle return to the relative hustle and bustle of Battambang city. 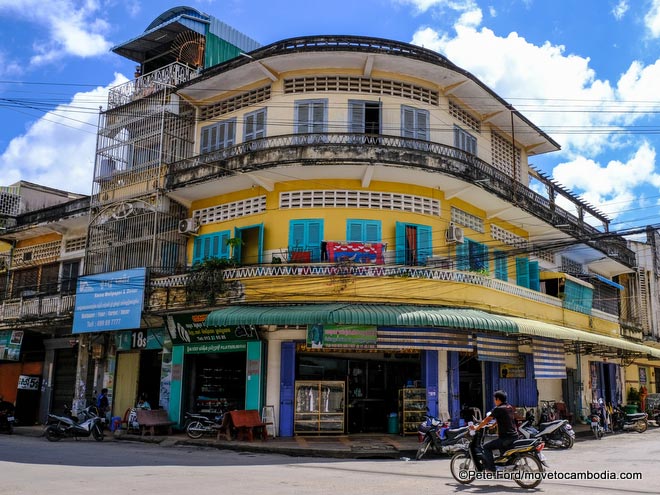 The well preserved Chinese shophouse architecture could be equally at home across southeast Asia.

And the city holds some gems of its own.

The train station and airport, both technically operational but lacking visitors, sit in preparation for the Phnom Penh to Bangkok railway to start regular service, and for whoever and whatever is needed to be flown in or out.

The Chinese shophouses, temples, and restaurants match if not best Kampot or Penang’s offerings, as does an afternoon wandering the lanes near the iconic 1930’s art deco market. With little traffic, it’s easy to stop to admire the still-hanging hand painted signs, and the colonial-era architectural gems. The impressive Royal Residence to the south of town, signaling the importance of the city in times past. 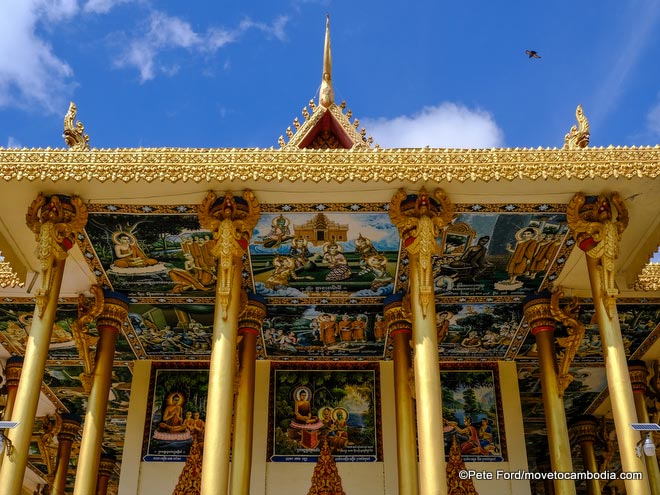 The elaborate depictions of the Buddha’s life at Wat Ek Phnom offer a glimpse of how the grey stones of nearby Angkor-era temple once might have been decorated.

For more excursions around of town, Phnom Ek to the north hosts a small Angkorian ruin, and a giant seated Buddha statue, while Phnom Banan and Phnom Sampeou to the southeast provide plenty of stairs to climb, excellent views and a whole bunch of bats. But no dinosaurs, for which Wat Pnuw is unique in Battambang if not temples across the country. Bonus points for any readers who can name the two other collections of dinosaurs in Cambodia that I’m aware of.

Reaching Battambang from Phnom Penh is a 6- to 7-hour drive along the under-renovation National Road 5, and should become faster and smoother each day. A handful of coffeeshops, restaurants and accommodation occupy the narrow streets south of the market, and more luxurious offerings are easily reached by tuk tuk or moto.

One Response to Battambang’s under-visited gems (including dinosaurs)