Posted on October 15, 2019 by MTC guest author
Get a quote for expat health insurance

Craft beer has been brewed in Cambodia for more than a few years, but until recently, it hasn’t gained the traction it has in other countries, including neighboring Thailand and Vietnam. 2019 has seen a real upswing in the Cambodia craft beer scene with more breweries and craft beer bars opening, but also foreign craft beer brands trying to enter the market.

I’m Kimmo, the co-owner of Embargo, and in this introduction to Cambodian craft beer, I’ll be taking a look at the brewers and craft beer bars in Cambodia. 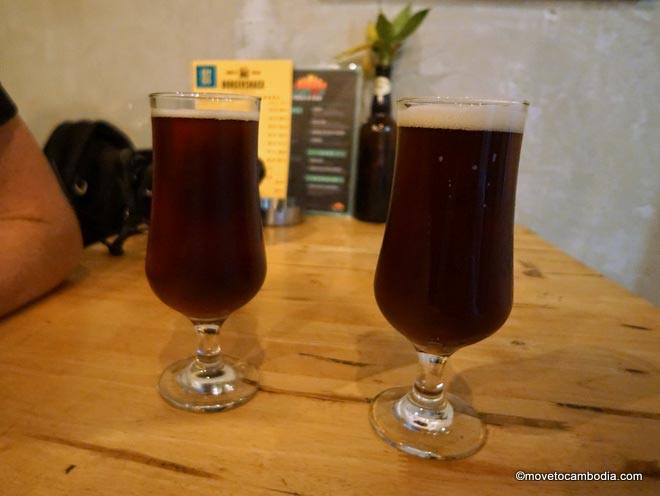 Probably the most promising brewery in Cambodia, Riel Brewing started brewing in 2015 and their engineering skills, passion for beer, and hard work has seen them constantly producing some of the best beers in the country. Not only do they make solid brews, they have their processes down to a science, so they manage to consistently produce very high quality beers — definitely not an easy task in a country like Cambodia where it can be a struggle to find high-quality ingredients. You can find their kegs in many bars around Phnom Penh, but also in Siem Reap and Kampot. They have recently started selling bottles, which means that even more venues will be able to serve their beers.

Unfortunately it’s difficult to find beers from The Local in Phnom Penh because they’re brewing in Siem Reap. They have recently been expanding their brewery so we are sure this will change soon. Probably the most experimental brewery in Cambodia with beers like a Creme Brulee Stout, and another beer that is probably the first sour in the country. They also have their own taproom and if you’re in Siem Reap it’s definitely a place to check out. 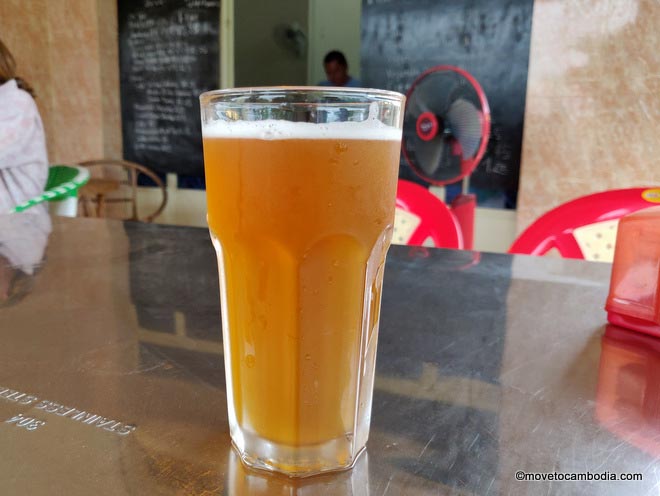 A glass of the cold stuff at Flowers Nanobrewery in Kampot.

Even Kampot has their own little microbrewery, or nanobrewery as the founder likes to call it. With batches of only around 100 litres, the name is certainly justified. Flowers Nanobrewery is run by Yuki, who is originally from Japan, and at the Kampot taproom he also serves fresh sushi, made with local fish and a variety of vegetarian options. Currently his bottle selection consists of the Lemongrass Pale Ale, Duckwalk IPA, Steamy Monday, California Common, and Black Cat Boogie Wheat Porter. If you visit his taproom you will instead find more experimental beers like a Dragonfruit Saison, an Abbey Beer, and a Dunkel Weizen. Yuki is doing a fantastic job, which is all the more impressive because he based outside of Phnom Penh.

Cerevisia, another Phnom Penh brewery, is well-known through their venues Botanico Wine & Beer Garden, and Craft Beer Garden by Cerevisia on Street 144. Botanico has been a popular expat hangout for nearly a decade, and a popular place for craft beer for the last few years. Over the years, Cerevisia have created a wide range of recipes including a Khmer Honey Blonde and an Irish Red, If you’re looking for a certain style of beer it is almost guaranteed that Cerevisia has brewed one. 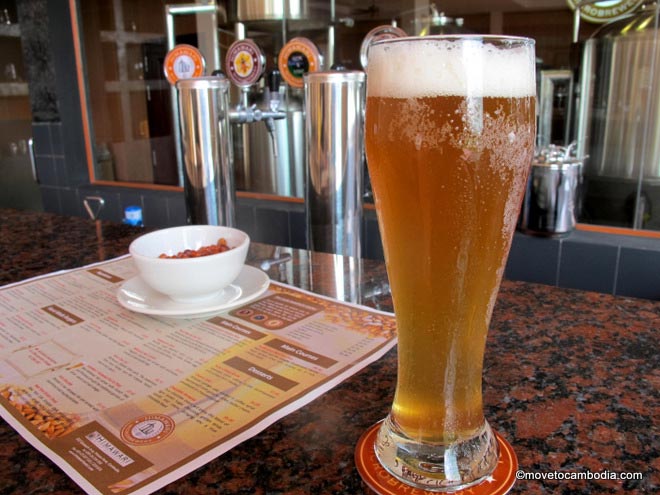 Himawari Microbrewery is part of a big hotel and serviced apartment complex. For some unknown reason this serviced apartment complex thought it would be a fantastic idea to run a microbrewery, and surprisingly, they make a few really good beers. The brewer behind most of their recipes is Singaporean Neo Say Wee. Himawari Microbrewery brews award-winning Apsara Gold among others. Their beers are mainly sold at the hotel, but can be found at a select few places in Phnom Penh.

If you are familiar with the craft beer scene in Cambodia and haven’t heard about TwoBirds, you might be surprised that they have been around for years. TwoBirds was actually created by a German father and son who moved to Cambodia to brew beer, and previously brewed at Hops Beer Garden. In early 2019 they decided to break away from Hops to start their own brand, TwoBirds. They have recently moved to the co-working space Factory and set up their new brewery there. 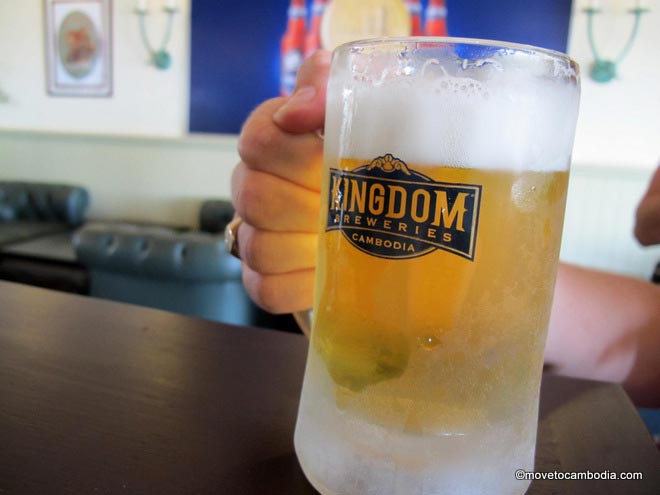 One of the oldest breweries in Cambodia, Kingdom classifies itself as a “medium-sized brewery”

According to their own words Kingdom Breweries is the only medium-sized brewery in Southeast Asia. These days they are mainly focusing on contract brewing for the Thai and Singaporean markets, but they do have their own Kingdom beers including a Pilsner and a Mango IPA. They have also created the brand Indochine Beer that has an IPA and a Wheat Beer. Kingdom beers can be found on tap in many bars around Phnom Penh, but because of their focus on contract brewing they might not be one of the front-runners in the Cambodian craft beer scene as some might expect. There’s still a chance that they’ll invest more in the Indochine Brand, and if they do it could definitely make a huge impact on the scene.

Most of the above mentioned brewers have been around for quite a few years and have their own taprooms where you can get their beers. If you, however, are looking for a place where you will find beers from many different brewers, and even some international craft beers, then you can visit one of the following. 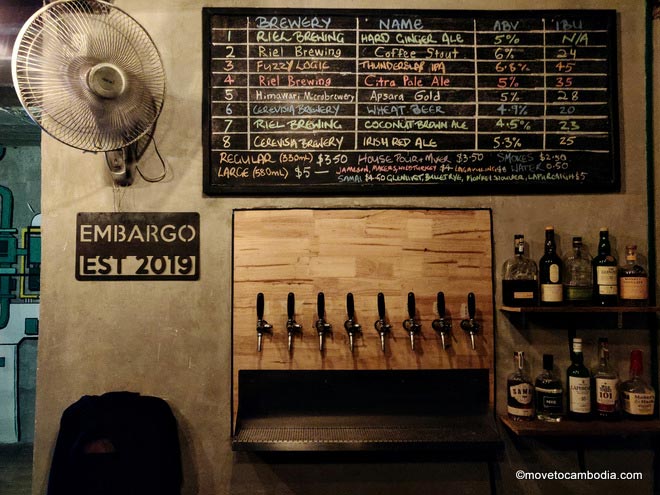 I started Embargo with an old friend. We thought Phnom Penh was lacking a really enthusiastic beer bar, so we decided to create Embargo. The bar opened in May, but we have already gotten a great response from customers, who are delighted when they realize they can try more than 40 different beers at our spot. We have eight taps and more than 30 bottled beers, mainly from Cambodia and Vietnam, but even some American ones. This currently makes us the only place serving American craft beer in Phnom Penh.

At Embargo you can find beers from Riel Brewing, Flowers Microbrewery, and Cerevisia, but also popular Vietnamese beers like Heart of Darkness, Pasteur Street, and Fuzzy Logic. We try to give our customers the widest selection possible and we do our best to stock some rare choices, too. We love sharing our favorite beers with our customers!

Box Office was one of the first bars in Phnom Penh that offered beers from local brewers. They have recently upped their beer game, and now boast one of the largest selections of local and international craft beers in Cambodia. On tap you can find beer from Riel Brewing and TwoBirds, but they also have a really impressive selection of Vietnamese beers in bottles. Pair that with their fish and chips and we have a great bar to enjoy a beer-soaked evening.

The beer selection in 5 Drunk Men varies from time to time, but mostly it’s really good. What they lack in craft beer selection they however make up for in view. They, without a doubt, have one of the nicest views on Riverside and it is something you can enjoy even if you don’t like craft beer. The food is supposedly good as well, but I still haven’t had the chance to try it.

2019 has definitely been a really exciting year for craft beer in Cambodia. Hopefully the people involved in the industry will continue to work together to help spread the word about what good beer is, and where to find it in Cambodia. There’s plenty of room for everyone to grow and I really hope to see more people get into brewing.

If you want to stay updated with the latest news in the Cambodian craft beer scene you can also have a look at cambodiancraftbeers.com

2 Responses to Craft Beer in Cambodia