Posted on March 25, 2014 by Lina Goldberg
Get a quote for expat health insurance

It wasn’t long ago that the major streets in the northern Cambodian town of Siem Reap were unpaved. There were no shopping malls, no cocktail bar…in short, it was a place only the most intrepid expats would consider living. John McDermott and Narisara Murray, were two of those adventurous expats. We profile these long-term expats to find out what makes living in Siem Reap so wonderful. 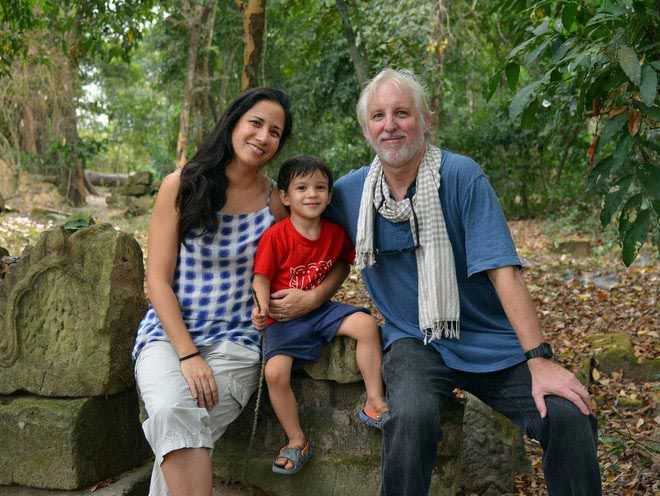 “Life here is at a different pace,” says John McDermott about his life in Siem Reap.

“When we came in 1996, Siem Reap was only a tiny little town—charming in its own way, but it was mainly just a place to stay when exploring the nearby temples at Angkor Wat,” says John. “At the time, I was just beginning to look at ancient sites around Asia for my photography. I was interested in finding sites that looked like they belonged to another civilization on some far-off planet. Angkor certainly fit that description.”

The couple originally met in the Thai capital of Bangkok, where John was working as a photographer for a local magazine and Narisara was a freelance journalist. They moved to Siem Reap full time in 2003 to set up a photography gallery showcasing John’s work and that of local artists.

“There’s so much flexibility about what you do here and how you live,” Narisara says. John agrees, saying, “If you have an idea, especially an original idea and want to put it into motion—starting a business, creating an educational organization, or fulfilling a lifetime dream of writing and being an artist—you can do it without difficulty or major expense.” These days Siem Reap is rapidly expanding. French-colonial buildings in the center have been restored. Many of these buildings, along with Chinese shophouses, host businesses that cater to the huge number of tourists who now come to see the Angkor temple complex. Just 15 minutes from town, Angkor is easily the country’s most famous attraction.

Yet, despite the tourism trade, Siem Reap holds onto its small-town charm. “The lifestyle is so stress-free compared to life in the States…life here is at a different pace,” says John, who originally hails from Arkansas.

Narisara says, “Even with all the international travelers and businesses that come here, it’s still a small town. You can get stuck in traffic behind a herd of cows, you can watch the monsoon storms sweep across the rice fields, you can hear the frog chorus in rainy season and roosters every morning. You’re a lot closer to nature than you are in a city like Bangkok or Singapore.

“And you get to pick your projects here. Everything we do is work, but everything we do is play.” In addition to working at the gallery, Narisara, who grew up near Washington, DC, is also writing a novel set in Cambodia and working on several non-fiction projects. The couple has witnessed the growth of an international expat community, many of whom are also involved in the arts in some way. “It’s easy to start a business or find a studio space,” says Narisara. “You can rent a studio space or a small house for around $200 to $250 a month in Siem Reap.”

John elaborates, “In many countries, opening a business is a nightmare of expense and bureaucracy. Here it is simplified and encouraged. As a small business, all you basically have to do is get a business license, rent a space, and hang out your sign. There’s more to it than that, of course, but you don’t have to run an obstacle course to get it going. The bigger the business, the more bureaucracy. But the idea is to get business going here and money changing hands. A storefront business means renting a shophouse for anywhere from $350 to $2,000 a month, depending on location.”

“We couldn’t afford to do this at home,” says John. Back in the U.S., becoming parents might mean the “death of creativity,” as Narisara laughingly puts it. But it’s not so for expats in Cambodia. In Siem Reap, you can hire an experienced nanny for between $90 and $150 per month. “Our son has a nanny whom he loves, which allows us to work on our own projects,” Narisara explains. “I don’t tell my friends in the States about it, because it would sound like I’m bragging.”

You can rent a small house for $250 a month.” Other costs are also much less than back home. A regular maid or gardener charges even less than a nanny. Monthly rent for a two- or three-bedroom villa with a garden ranges from $300 to $600. And food is less expensive in Siem Reap. Several grocery stores in town sell imported Western treats, often for less than they cost at home. Shop locally at the market and you’ll get a week’s worth of fresh produce for around $15. All told, the average monthly budget for a couple is $1,400 a month, including rent.

“You can buy produce at a local open-air market for a few dollars a day, or you can splash out on a bottle of Veuve Clicquot and imported lamb at the expat grocery store,” Narisara explains. “You can live in a wooden Khmer-style house on stilts for a couple hundred dollars a month, or you can rent a modern villa with a landscaped garden and pool and sauna for a couple thousand dollars a month.”

John and Narisara have just had their second child. Because medical care in Cambodia is still below Western standards, they go to Bangkok, a short flight or six-hour drive from Siem Reap. But as tourism in Siem Reap continues to grow, all types of services are rapidly improving, from medicine to Internet access. Roads through town that were once unpaved are now lined with international restaurants, galleries, bars, and boutiques, and new businesses pop up every day.

“That’s what’s so exciting about Siem Reap,” John says. “Everything is growing and changing.” After a decade in Cambodia, John and Narisara are still in love with the easy life they’ve created there for their small but growing family.

You can see John’s photographs of Cambodia at asiaphotos.net