Posted on January 15, 2015 by Lina Goldberg
Get a quote for expat health insurance

I’ve always harbored fantasies of having a life like the Little House on the Prairie book series that I devoured as a kid: growing my own food, building houses, killing bears. And while I’m not ready or willing to commit to full self-sufficiency, my life as a Cambodia expat — and our move to Siem Reap — has allowed us to dabble in urban homesteading. 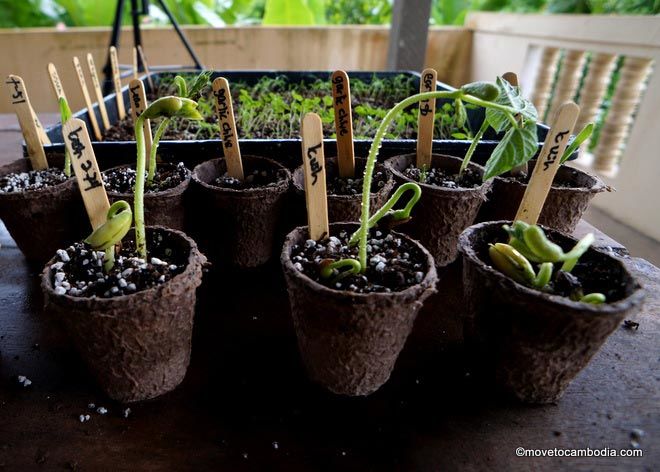 Starting with a bunch of seedlings to see what will actually grow well in Cambodia.

Urban homesteading encompasses a wide range of activities that are often associated with farm life, like growing your own food, canning, preserving, composting, and raising animals. Unlike real farmers, though, urban homesteaders live in suburbs or cities and so have limited space to work with. The brilliant designer of the Move to Cambodia book, Dan O. Williams, also designed one of the movement’s most inspirational tomes, The Backyard Homestead. He gave me a copy a few months ago and I attacked it like a kid on Christmas morning.

All my adult life I’ve lived in dense cities, and pretty much my biggest homestead was a window box filled with basil, oregano, and thyme. In Siem Reap, though, we’ve got a house with a garden big enough to allow us to grow our own food, or at least entertain fantasies of doing so. When I enquired about raising livestock, one of my neighbors waved aside the idea, telling me, “This is the city, not the provinces!” But he wasn’t too citified to add that if our geese had any babies, he’d like a few. 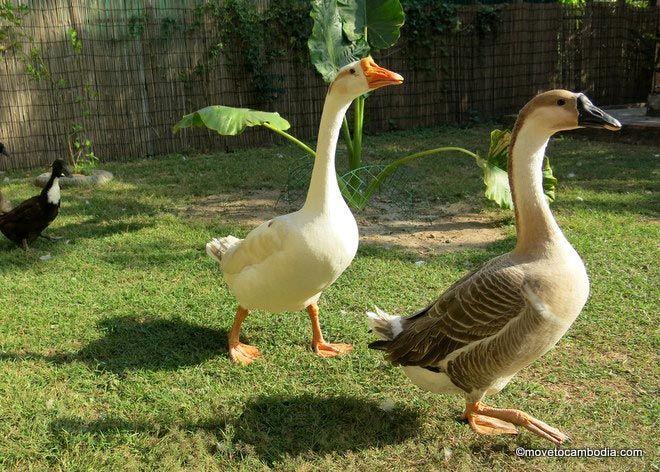 Contenders for the most spoiled geese in Cambodia.

One of the things I love about living in Cambodia is that there’s still a lot of flexibility about what you can do, and so much is still unregulated. Back in the U.S., many cities have laws against keeping chickens or ducks inside the city limits. Now I get woken up by roosters every morning, so I understand why those laws exist. But being a Siem Reap expat allows me to live out my sustainable-living fantasies while still living ten minutes away from a grocery store that stocks brie and Doritos.

Since we moved to Siem Reap we’ve slowly but surely started working our way towards our own rural idyll. The ducks and geese we’ve accumulated are just pets, but they certainly help contribute to my image of myself as a gentleman farmer. Our house came with five mango trees and two jackfruit trees, and we’ve since planted six papayas, a lime tree, a pomelo tree, a passionfruit, and two bananas. I have high hopes for the papayas and bananas; they’re both fast growers that can start bearing fruit in less than a year.

We planted three bananas, but the ducks attacked and demolished one of them. The ducks generally are not interested in my goal of raising my own food, and seem to think my goal is to raise their food: they spend most of their day trying to get around my creative attempts to keep them away from my seedlings. 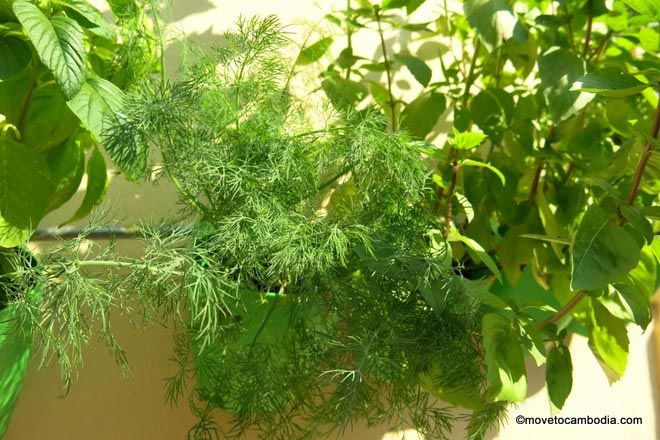 We grow the herbs we can’t find at the market, including Italian basil and dill.

We’ve also made some raised beds, where we are starting with several types of beans and herbs that aren’t reliably available in Cambodia, including dill, Italian basil, and flat-leaf parsley. Cambodia expats have been griping for years about the lack of flat-leaf parsley (hint: you can buy it at Veggy’s in both Phnom Penh and Siem Reap occasionally), so I figured it would be worth trying to grow our own.

Outside of those window boxes I have no experience cultivating anything except a sense of dissatisfaction, so there’s been plenty of trial and error.We’ve seen a lot of Cambodians growing corn, so we’ve got a few stalks planted, as well as eggplants, peppers, and a few other random things here and there. Our green-bean plant decided to produce just a handful of beans before it expired, giving us a literal three bean salad (beans turn out to need more direct sun). We’ve got tomato plants on our roof that are just starting to fruit. Larger varieties of tomatoes don’t do well in Cambodia; they can’t get enough sun and the humidity causes their skin to split. So we planted several types of cherry tomatoes to see which would work. And our roof is covered with cherry tomatoes.

It’s been a learning process. The plants that grow at home often won’t do as well in Cambodia. But with local vegetables and herbs very inexpensive at the market, focusing entirely on Asian vegetables didn’t seem very appealing. However, we’ve learned the hard way that cold-weather vegetables just don’t want to grow here. Our beets died and our kale has decided to remain microkale (although it still tastes good). We’re growing a few other local bits and bobs, like betel and lemongrass, and will probably add more as we give up on trying to grow things that don’t like this climate. I’ve also been looking for plants that aren’t native but might be able to handle the weather here; I’ve got a tomatillo plant that’s six inches tall that I’m holding out hope for, and have several types of pepper seeds on their way.

Because the soil in Siem Reap is so inhospitable to most plants — it’s sandy clay that has low nutrients — we’ve started composting to supplement it. Composting also gives me a sense of self-righteousness that more than makes up for the effort it takes.

It’s hard to overstate the privilege we experience as expats in Cambodia; for example, we’ve been able to hire a gardener to come once a week and help us figure out what we’re doing, something we wouldn’t be able to afford at home. He’s been transplanting local plants and helps create barriers to keep the ducks from eating them. We still need to do the bulk of the work and water everything on a daily basis, but having the help is an undeniable asset. Also fantastically helpful is being able to learn from the locals, who obviously know quite a lot more than we do about the best way to grow things here. Even in our relatively suburban neighborhood most of our neighbors have at least a few chickens and several fruit trees and other edibles growing. 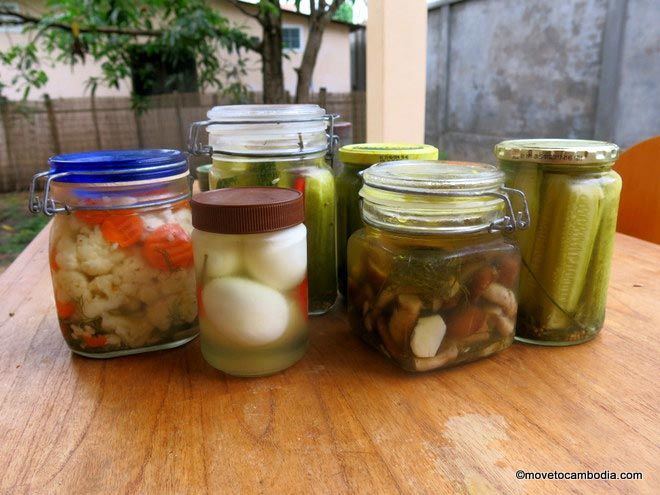 It turns out you can pickle just about anything.

Canning and preserving are next on my list, and I’ve gotten obsessive about making pickles and various other fermented projects. Fermenting things is almost too easy here; fermentation can start in a matter of hours because of the heat. Right now I’ve got a vat of jackfruit hooch going, which I intend to make into vinegar, and I’ve been making kimchi and sauerkraut as well.

I’m alternately jealous of and daunted by the “real” homesteaders in the Cambodia expat community. While our garden is still mostly a barren wasteland, other expats have moved to Cambodia to fulfill their dreams of owning a proper farm and are happy to act as a resource for other would-be farmers. There are several online communities for Cambodia expats who are interested in agricultural topics: the Living in Cambodia forums are owned by an American farmer and have a decidedly barnyard focus, the Siem Reap Agricultural Network Facebook group is one of the best resources in the country, Phnom Penh Seed Shop sells seeds but can also offer growing guidance to amateur farmers, and Agriculture Consulting Team (ACT) in Cambodia is also worth a look.

23 Responses to Urban homesteading in Cambodia