Expat Q&A: Care about the people not the money

Posted on May 5, 2020 by MTC guest author
Get a quote for expat health insurance

It’s been quite a while since we did an Expat Q&As, and even longer since we did an “old timer” Q&A, where we talk to expats that have been living in Cambodia for years and years. We love talking to long-term expats about what it was like living in Cambodia in decades past, because they have the best stories to tell and the best advice to give. This time we talk to Andy Ahmed, a former teacher from the UK, who has lived in Cambodia for 15 years. 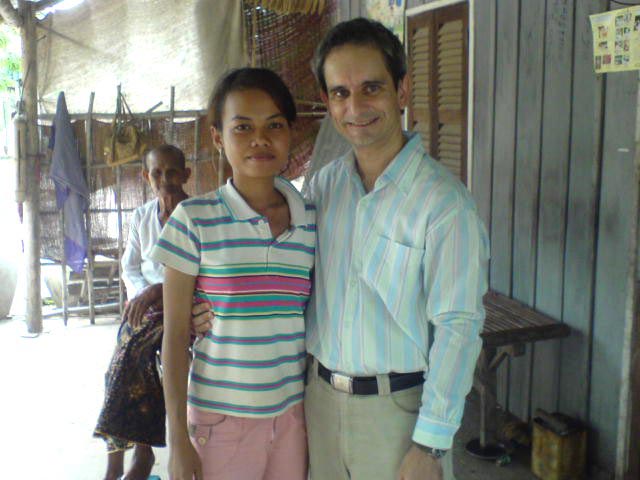 Andy and his wife Nou Chakriya in Cambodia, around 2007 when they got married.

What was Cambodia like when you first arrived and how has it changed?

“I came in 2005. It was a mess, but that’s why I’d come. I’d previously been in Kathmandu from 2002 to 2004 establishing a school for street kids in the midst of a civil war, and I was looking for the next most screwed-up Asian nation. The education system was in a particularly dire situation and I thought I might bring my teaching skills and experience ‘to make a difference’. I didn’t.”

“Couldn’t be much more different than it was when I first arrived. I’m so relieved to be out of teaching. It was a profession I’d loved in England and then in Nepal, but in Cambodia for me it was fourteen years of frustration. The students were fine – often wonderful, but as a conscientious teacher whose expertise was in raising standards, I never came across management at the tertiary level that gave more than an insincere passing nod to quality and was too focussed on profit. Now I’ve retired and I’m concentrating on doing something I love – writing a novel, with no pressure and no deadline.”

I know that you contemplated moving back to Britain a few years ago. Why did you decide to stay in Cambodia?

“What happened was ten years ago my Cambodian wife’s father had just died and at the same time we were the victim of a land-grab which cost me all my savings. My wife was distraught and wanted to quit Cambodia. She was refused a first UK visa so I went alone to establish a career and steady income. Now I had originally been an outstanding teacher in the UK with a national reputation, but after being out of the game for a decade I returned to a different environment, run by faceless agencies who wanted to stick me in schools where I’d be eaten alive. So I realised I was one of those expats who’d be hopeless back in his home country, and also that my wife would be reduced to menial labour. It wasn’t us.

It was a game-changer, though. I was back after about four months with a new resolve, to make it in Cambodia. Well not me – I got to the top of the tree teaching-wise, but it still sucked. However, at this point in time my wife was starting to demonstrate unusual potential as a businesswoman. What I’ve done for the last few years is take a backseat to her career, acting as a sort of strategic planner as she put in all the hard yards. After years of being told by students, ‘Sir, you don’t understand our country – you have to lie and cheat to survive in business’, my main strategic idea was ‘Care about the people not the money, and the money will take care of itself’. It’s turned out to be a killer plan. I’ve had many other ideas but these days she’s usually two steps ahead of me so my brain is mostly redundant now and my main role is de-stressing her when she gets home from her fourteen-hour day.

From nothing, she built up a business preparing Cambodians to go to Japan as migrant workers. She’s so highly respected within the Ministry and throughout the industry that within a couple of years she’d risen to one of the foremost operators in the country. Unfortunately, that particular market has been hit especially hard by the coronavirus. 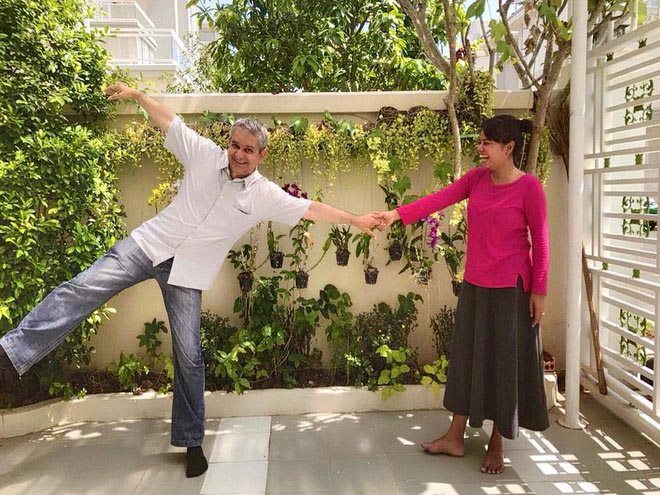 Andy and his wife in Phnom Penh today.

However, we have Plans B and C almost ready to go, so we’re looking forward. A couple of years ago, she set up a side-business to cover my loss of earnings from teaching so that I could retire. It’s a home-based online fashion business. Currently, we’re raking in four times more than I ever did as a teacher, which is not bad for what I originally thought was a semi-serious sideline. Some of our other plans are in early stages, but the main one has been in the works for two years – a major recycling business in Kompong Speu which we hope to be up and running later this year.

Frankly, all of my success here has been down to my wife. The big house, the big car, the housekeepers, the holidays whenever we like (before the lockdown) – none of that was possible on a teacher’s salary. In those early days after I’d lost my savings in the land issue and returned a failure from England, what with supporting her family on my meagre wage, we were living in horrible apartments and I’d have to save up for two years to afford a single airfare to visit my family, meaning I missed my gran’s death and funeral.

I quickly learned the art of keeping out of sight; she’s brilliant at socialising and negotiating with Cambodians. I feel my presence alters the dynamics – generally speaking when doing business, Cambodians will treat a foreigner differently to a fellow Cambodian, so it works for us better that any input I make is unseen and unacknowledged. She also got decorated for her services to the nation last year, and in addition was invited to travel with the prime minister.

I’m not sure that reading about my experience in Cambodia is terribly useful to other foreigners. Personal experience taught me to maintain few and distant relations with expats here and embed myself exclusively within Cambodian society. That decision was part of the game-changing package and has served me extremely well, but as is clear, was only possible when I realised the exceptional capability of my partner.”

2 Responses to Expat Q&A: Care about the people not the money