Expat Q&A: Friends (and wine) from around the world

Posted on April 29, 2013 by Lina Goldberg
Get a quote for expat health insurance

In this series we talk to Cambodia expats about what they wish they had known when they were first moving to Cambodia that they know now.

This week we talked to Hilary Ford, who moved to Cambodia 9 months ago. Originally from Jackson Hole, Wyoming, Hilary worked for a child rights NGO in Chiang, Mai, Thailand, before coming to Cambodia. Currently she’s working for an international organization that focuses on democracy and governance. 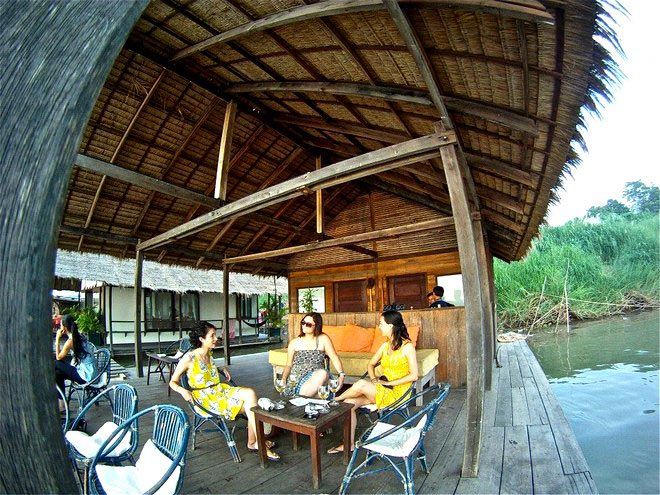 Hilary relaxing with a hard-earned drink at the Bungalows.

MTC: Hilary, what do you know now that you wish you had known when you first moved to Cambodia?

HF: “I wish I would have known just how much I would enjoy living here. Having prior lived in Thailand and visited a few times, I fooled myself into thinking I knew what to expect. Yet Cambodia, and Phnom Penh specifically, has surprised me on many different levels. To begin with, I wasn’t expecting Phnom Penh to be quite as cosmopolitan as it is. There are quality restaurants of all varieties, beautiful boutiques, a growing contemporary art scene and much of the nightlife is unexpectedly sophisticated. Although a lot of this comes from the international community, Cambodians have been capitalizing on Phnom Penh’s multiculturalism as well and I like that there remains a Khmer twist to most things.

On the other hand, I wish I had known how established the expat bubble is here and how difficult it can be to be to integrate into the local culture (though not assimilate, key difference). Phnom Penh has a massive expat population and sometimes it can feel like it exists almost completely independent of the local community. Moreover, there are significant socio-cultural differences between Cambodian and Western lifestyles that tend to fortify this divide. For one, while most young expats here are focused on their careers, traveling the world and not being tied to major commitments, most of our Cambodian counterparts of the same age are getting married, having children and saving for their first homes. Even if they aren’t quite at this point, they usually still live at home and have a great deal more familial obligations than we do, especially Cambodian women (even professionals).

This isn’t a bad thing at all, just a reality you have to accept here. However, that doesn’t necessarily mean you have to live your life sequestered away from Cambodian culture and it is possible to make Khmer friends, just on different terms. I’ve learned to compensate by getting to know my awesome Khmer colleagues at work, my landlord’s family who are lovely, and my always welcoming neighbors. That said, it’s important to get to at least a basic level of Khmer conversation and it does really help not living in expat/tourist-centric BKK1 or Riverside. Living in a more local neighborhood just gives you more opportunities to reach out, but ultimately it is on you to make the effort regardless of where you are.

My first experience living abroad was as a high school exchange student for a year in rural northeastern Thailand which was sort of immersion to the extreme. Because of this, adjusting to the expat lifestyle over the past few years has been a tad jarring to say the least. All that said, I’ve truly grown to value the benefits of living in a place with a large international community. I appreciate the fact that I can talk to my family more than once every month or so because I have access to Skype-able internet. I appreciate the fact that I have access to things like deodorant that won’t bleach my armpits, tampons, good coffee and chocolate (god bless whoever decided to import Reese’s), that there are lovely cafes to hang out in and that there’s no imperative to eat rice or noodles for every single meal. And anyone who knows me will know that I am ecstatic to have access to affordable and reasonably decent wine.

Moreover, I appreciate that I am apart of this interesting community and I feel really fortunate to have met some genuinely amazing people here (both foreign and Khmer). Yes there are a fair number of jaded “really should have gone home a few years ago” types and some people with bad cases of white savior complex, but for the most part the expats here are a diverse, intelligent, cultured, and critically engaged bunch. I also absolutely love how international it is here and that by moving to Cambodia I’ve acquired friends from around the world.

One of the things I love the most about Phnom Penh however, is that even though it is very comforting and welcoming for foreigners, it rarely lets you forget that you’re in Cambodia. I just returned from my first real trip out of the country since moving here and there was something about being back riding sidesaddle on my neighbor motodop’s bike, weaving in and out of the insane traffic and then getting a giant whiff of the “shit creek” stench in BKK2 that just made me feel at home. Oddly, this is what makes Phnom Penh charming for me.”

One Response to Expat Q&A: Friends (and wine) from around the world