Posted on February 11, 2013 by Lina Goldberg
Get a quote for expat health insurance

This week we talk to Kristin O’Connell, an Australian with a corporate background who moved to Cambodia to work in the development sector. Kristin had never ventured out of Brisbane before moving to Phnom Penh three years ago. 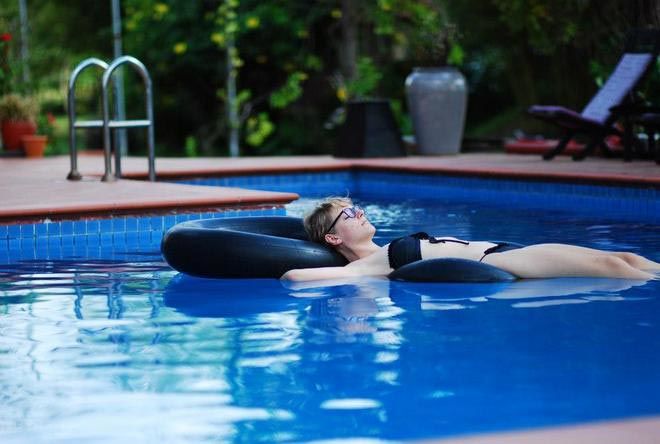 Kristin enjoying one of her favorite things about Phnom Penh: the pools. Photo by Lauren Crothers.

MTC: Kristin, what do you know now that you wish you had known when you first moved to Cambodia?

KO’C: “For a long time prior to my move to Cambodia I had been following the country’s news from Australia. Because I had never been, my decision to apply for a 12-month position conjured visions of wooden houses, periods of boredom and limited cuisine options.

Dated blog posts coupled with the complaints of disgruntled travellers led to these and many other misconceptions.

Immediately on arrival almost all my expectations of life in Cambodia were turned on their head. Within a week I had fallen in love with my adopted city and knew that the initial commitment of 1 year was not going to be long enough.

If you are considering a move to Cambodia as an expat in 2013 some of your experiences will be the same same as mine, however in this rapidly changing country many will be different. With so much time having passed, I’ll try to talk about the things that me-of-the-past would like to know if moving to Cambodia today.

NGOs are not always what they appear. Development is a large and profitable sector with many seeking to capitalise on the flood of foreign aid. Look carefully into the background and practices of any organisation you plan to work with or support.

Not all Cambodians need or seek charity and generally the people best equipped to support those who do are Cambodian themselves. Broadly speaking, Cambodians are enthusiastic and entrepreneurial. Expect to feel more admiration than pity.

Not every woman in Cambodia has had to work as a prostitute and not all those employed as such necessarily want a change in circumstances. Try not to be condescending and throw out any preconceived ideas before you arrive.

In starting a new job, expect to obtain a second family. What may feel like invasions of privacy to a foreigner are very normal interactions between Cambodian co-workers. If you are single, expect to be offered marriage prospects from among your colleagues’ relatives more than once.

Respect for the hierarchy is important. Raise concerns and differences of opinion in private wherever possible. Nobody wants to see a workmate without a face.

Phnom Penh doesn’t have so many wooden stilt houses. Seriously, trying to live like a martyr is tough here. As an expat, the challenge of adjusting to life in Cambodia is not one of enduring daily hardship and dire poverty, although both exist here. The perfect house or apartment is out there although persistence may be required.

The capital and the provinces are like two separate countries. When outside Phnom Penh and tourist spots it is easy to see the source of the stereotypes that appear in the Western media. Try not to romanticise poverty.

There is no need to import bed sheets and electrical appliances from far flung corners of the globe. Just go to Central Market.

Things I wish I’d known about the social scene

With its complex and brutal history, Cambodia attracts a high number of interesting and entertaining expats. In addition to Cambodian friends I have met some of the most important people in my life here. While leaving friends at home behind is difficult there is little chance you will feel isolated once here.

There are many fantastic bars and more than enough to suit every taste. Alcohol is almost insanely cheap. Do not move here if looking to overcome alcoholism.

Cambodia is easy to love and even easier to return to. Living in such a transient city I have experienced a far greater number of goodbyes than one would wish for. The silver lining is what I like to call the ‘boomerang effect’ – most people whose departure is mourned simply can’t stay away for too long.

Cambodia is not a hardship posting. Don’t expect limited access to electricity, Internet or Reese’s Pieces. Those aiming to nobly sacrifice a privileged lifestyle for the good of humanity may need to look a little further.”