Expat Q&A: Toto, we’re not in the field anymore!

Posted on March 18, 2013 by Lina Goldberg
Get a quote for expat health insurance

This week we talk to Clare O’Reilly, who has been pillaging the nightlife of Cambodia since January, 2012. Originally from Sheffield, UK, she has taken to Phnom Penh like an olive to a martini. During daylight hours she has spent the last six years working in humanitarian roles with countries that have faced conflict and violence. 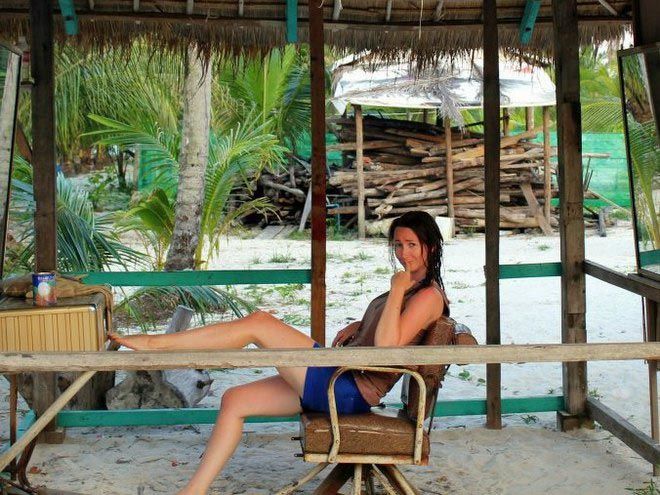 Clare enjoying the services of a local beauty salon.

MTC: Clare, what do you know now that you wish you had known when you first moved to Cambodia?

COR: “I’m often a mixture between Monica from friends and the Littlest Hobo when it comes to packing. Sexy image, no? Calm down boys, I’m talking here. You will often find me, sat on the floor, with neat piles of utter tosh surrounding me. Do I need my entire DVD collection in the field? Should I bring two rain macs or one? Is that even a rain mac, or did I make that from a bin liner at Halloween? I don’t own any flip-flops, but those shoes have holes in, will that do the same job? Its what I’d call “organised chaos”, and what my loved ones would call “the remnants of an H-bomb explosion”. If I’d known…well, anything…about Cambodia before I moved here, would I have been better off? I’d have had less jeans in my luggage for sure…

You land in Phnom Penh, all geared up for life “in the field”, and realise very quickly why your HQ colleagues were laughing at you for using that phrase. I’ve worked in some gnarly places, experienced long drop toilets with smells that could kill bison, and insects the size of small dogs, and guys with AK-47s in your face (Papa, if you’re reading this, it was not that dangerous, honestly). Oh, but Toto, we’re not not in the field anymore.

Because then you get to Phnom Penh. With its French restaurants, and delicatessens, and nightclubs. If I had known just how fancypants and, well, terribly lovely, my life would be here…I’d have packed more dresses. I’d have also prepared for the life less healthy. Working across from a cupcake shop, and living within walking/biking distance of innumerable food establishments has wreaked havoc on my attempts at either a local, or doctor approvable, level of food consumption. I’ve managed to stop smoking (while my $1 a day habit wasn’t breaking the bank, it was going to actually break me) and I’m gently weaning the bar owners of Phnom Penh away from using me as a sole source of funds.

It would also have prepared me to be more patient. Not with Cambodian people, who are for the most part endlessly smiley and generous and creative, and in fact patient with my shocking lack of Khmer language skills, but with the occasional exception-to-the-rule expats. With the “I’m saving lives, practically singlehandedly” types (you are not special, you are just a cog in a hopefully effective machine); the “I hate Cambodia” types (Oh my word, it takes, like, hours to get served your cocktail? Waaaaa); the “We’re needed here because the Cambodians couldn’t do it without us” types (Go boil your head); the “I’m here because I like to party, so whatever job I can get is fine man. I’ll probably just teach” types (Put the textbook down, and back slowly away); to the extreme “My reasons for being here are shady at best, don’t make eye contact with me” types (I hope you make your new wife very happy).

But I’m not complaining. I love this place, for all its madness and mad people. This city, and its genuinely wonderful mixture of folks, from all over the world–Cambodians most definitely included–is often a fascinating and thrilling place to be (and not just when riding a moto at night with a questionably sober driver). You get to meet people engaged in politics, human rights, journalism, a whole kaleidoscope of NGO professions, teaching, arts, music etc. etc. It’s often a much broader social selection than you would find in most international postings, because, well, there are just more of us here with the freedom to say and do as we like the majority of the time. We are a sociological experiment, a microcosm of the big wide world, lumped in together in one city. Then left to mate, befriend, defriend, and generally exist in the same world. And had I known any of this beforehand, I certainly would have relaxed and enjoyed the ride more, tread on eggshells less, and let myself get washed along on the sea of insanity, safe in the knowledge that the only things I do which genuinely matter are conducted between 9am and 5pm. “The rest will come out in the wash”, as every one of my Irish aunties has always said.

And I have met some incredible people, formed bonds, whined about saying so many goodbyes, and bemoaned the transient nature of this city (though refused to refuse to make friends with short-term folk, they’re often the most fun). Ultimately, I wish I’d known what an impact this city would have on me. I doubt it would have made a huge difference to my packing skills – I have 12 pairs of shoes here, and only wear flip flops – but maybe I’d have forced myself to man up earlier, prepared myself emotionally. But let’s face it, life is all about surprises…and I’m probably not deep enough to do that anyway. My emotional level is on a par with Spongebob Squarepants. I do wish I’d known how many cupcakes I’d eat, but only so I bought gym membership sooner. But anyway, where’s the fun in that?”