Posted on January 21, 2015 by Lina Goldberg
Get a quote for expat health insurance

Gone are the days when there were just one or two crab shacks in Kep to choose from. Lately, more and more restaurants have been popping up along the shore next to Kep’s Crab Market, including several higher-end offerings, and these are the only ones that seem to make it into the Lonely Planet. I’m still of the belief that the most unassuming places are what make Kep’s Crab Shack Row so special, but I’m willing to eat crab just about anywhere in town to put that to the test. In our last Kep crab shack face-off we compared Srey Pov Restaurant and So Kheang Restaurant to market leader and Lonely Planet darling Kimly. Both compared favorably. This time we try a few more and see if they can beat Kimly at their own crabby game. 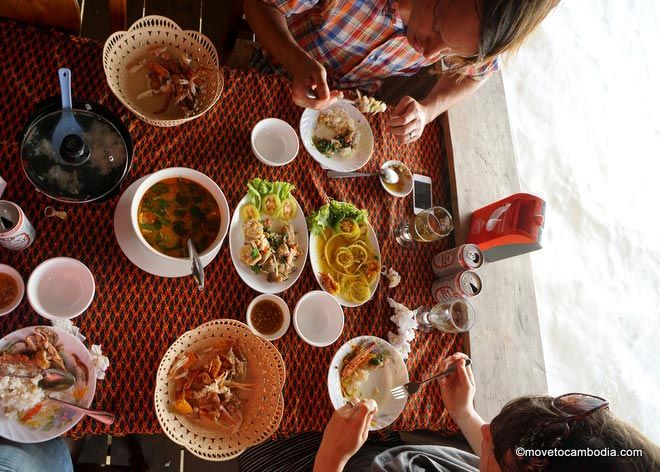 Your diligent crab testers getting down to business.

Diamond Jasmine may have a name better suited to a showgirl than a crab shack, but this friendly, family-owned business is easily the new contender for best crab shack in Kep. (Those who have been going there for years say that they have always been this good, it’s just that no one was paying attention.) The menu is similar to Kimly’s but Diamond Jasmine is easily better in both flavor and value. The standouts are the curry crab — seafood that’s been stir-fried in Cambodian kroeung (called “crab with spices” on the menu) and prawns with Kampot pepper. 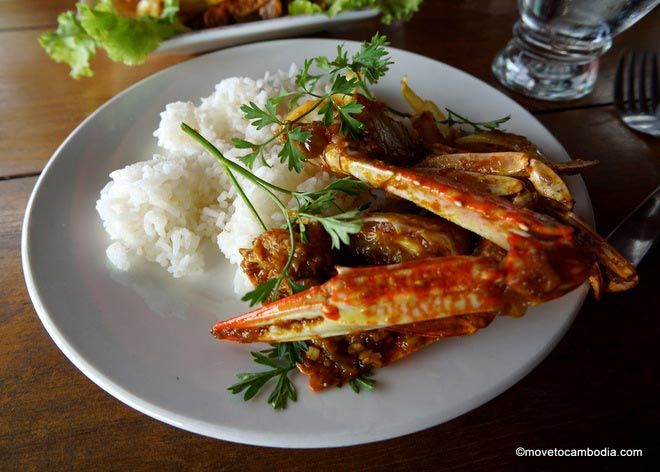 Both the size of the crabs and prawns and the size of the portions were much larger at Diamond Jasmine, and cost less. The crabs were the big ones that the crab ladies usually hold back unless you demand them, and a medium dish at Diamond Jasmine had as many crabs as the large at Kimly. The sauces had a lighter touch but were just as good, putting the flavor of the seafood at the forefront of the dish. The prawns were large and liberally doused in both fresh green Kampot pepper and ground black pepper, making the dish intense and delicious. The soup sngor chuok kdam aka sour crab soup, was light and citrusy, the perfect compliment to the heavier flavors of the curry and pepper dishes.

Located next to Diamond Jasmine Restaurant, Srey Neang is a quiet, unassuming crab shack that, like the rest of them, look out onto Kep’s crab flats. The menu is similar to every other Cambodian-owned restaurant on the strip — there’s a page each for crab, prawn, fish, and squid dishes, as well as a selection of chicken and pork and various types of “moodles.” We ordered prawns stir-fried with Cambodian kroeung curry paste (called “prawns with spices” on the menu), fried crab with clear noodles, and fish sour soup with lemongrass. 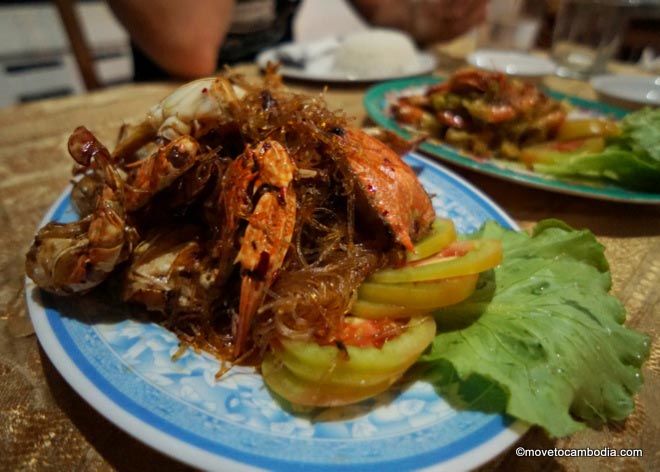 Heavy with oil, the fried dishes were perhaps not the most compelling of the face-off, but were very good. The chili-infused crab had an understated, greasy deliciousness. The prawns were wonderful, and their taste was only heightened by the fact that we heard them pounding the kroeung fresh for our order. The curry was rustic and chunky, which made it easy to appreciate all of the separate flavors. The soup tasted like chicken powder and was the weakest dish of the bunch. Srey Neang has absolutely nothing unique about it and the cold fluorescent lighting does the place no favors, but the incredibly friendly service and low prices make it with visiting.

Holy Crab is one of the newer upmarket restaurants nestled in between the run-down crab shacks on Kep’s Crab Shack Row. With its punny name and an actual paint-job and attempt at interior decor, Holy Crab represents the new wave of Kep seafood eateries that will probably take over the whole strip eventually. For that reason, it’s hard to be objective about places like this. On one hand, it’s nice to sit down in a place that isn’t an ambiance black hole, lit by a lone fluorescent lightbulb. On the other hand, it seems ridiculous to pay double to price just to have someone else remove the legs off the prawns. 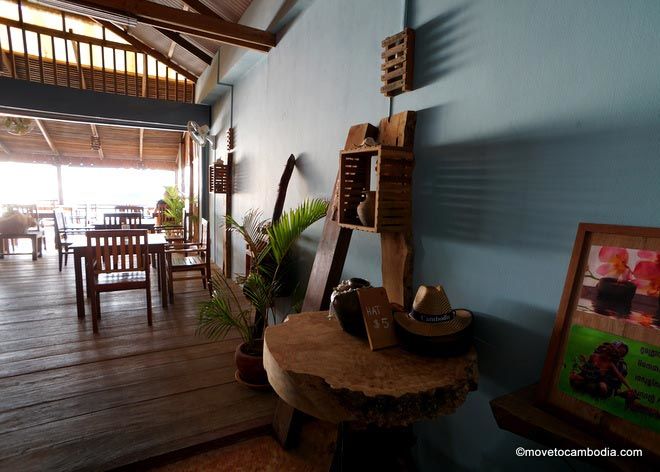 Yes, that’s paint on the walls of Holy Crab.

Holy Crab’s offerings were definitely more refined in terms of preparation, but I strongly believe that the messiness of it all is part of the experience. One of the nicer things we tried was the crab soup, which was a rich, flavorful consomme with tender morsels of crab and slivers of black mushroom. It was wonderful, but the bowl was so small as to only be a few mouthfuls (seriously), and at $5.50 was priced similarly to one of the giant vats of crab soup at the neighboring crab shacks. If you’re looking for a more upscale night out, though, in that respect, Holy Crab delivers.

Srey Ka has an unassuming interior — that is, it’s completely bare-bones with little more than a few flypaper-covered fluorescent lights and Cambodia beer posters all over the walls. But the spartan decor belies the food, which is slightly more expensive than some of the more low-budget crab shacks (and by slightly, I do mean slightly, about $1 per dish) and a bit more refined. The tom yam soup we ordered had deboned fish, a rare occurrence in Cambodia. The soup was one of the best we had in Kep, it spicy but well balanced, and filled with fresh herbs. We also ordered stingray with hot basil. This was one of a few items they had on the menu that we hadn’t seen elsewhere, and it was a highlight of the meal. 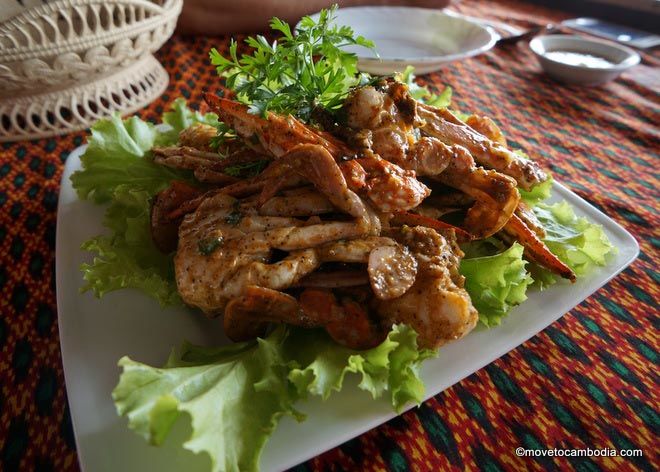 Crab with Kampot pepper at Srey Ka had both pickled pepper and ground black pepper.

For the purpose of comparison, though, we ordered crab with Kampot pepper and prawns with spices (kroeung). The crab with pepper had ground black pepper and pickled green pepper, which was an interesting change, although I still prefer the fresh green pepper. The prawns were good, but not as appealing as those at other shacks. Overall, Srey Ka was better for their beyond-crab-and-curry-prawn offerings, but if you’re just looking for crab, it’s not the best choice.

This time’s winner? Diamond Jasmine, for sure, but we’re still partial to buying crab directly at the Crab Market. Learn more about how to buy crabs direct from the crab ladies.