Posted on March 20, 2015 by Lina Goldberg
Get a quote for expat health insurance

Since it opened three years ago, Cuisine Wat Damnak in Siem Reap has become a critically acclaimed culinary institution, attracting patrons from all over the world. Many consider it the mecca for modern Cambodian cuisine, and they’ve just been honored by being named one of the 50 best restaurants in Asia.

This is the last of five posts from Steven, who spent time working in the Cuisine Wat Damnak kitchen, covering a five-course menu and describing some of the techniques and flavor combinations that Chef Joannès Rivière uses to such brilliant effect. Chef Rivière’s recipes have inspired a legion of chefs in Cambodia, both local and foreign. He has graciously supplied some simple recipes and cooking tips to inspire your kitchen, too. 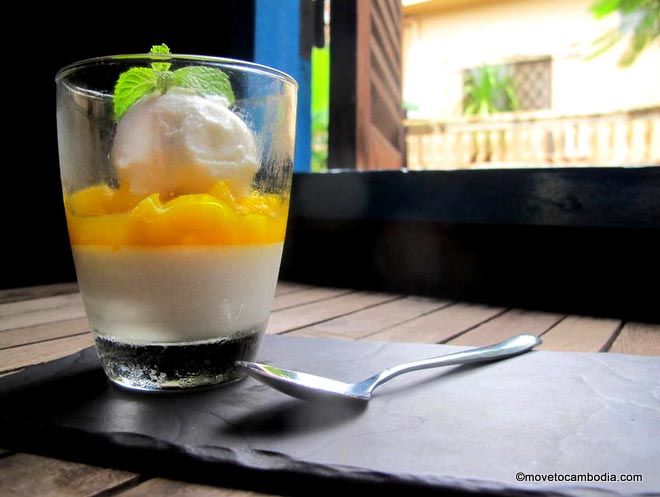 We’ve reached the last course of our five-course menu from Cuisine Wat Damnak, and that means it’s time for dessert! For this recipe Chef Rivière applies his pastry training to some local ingredients to create a light, fruity dessert that will fit nicely at the end of any meal. The panna cotta and the sorbet provide an indulgent base and the pineapple and turmeric mix, braised in white wine, adds a tartness that beautifully balances the overall flavor. The slight hint of turmeric gives added dimension to this simple and classic dessert. 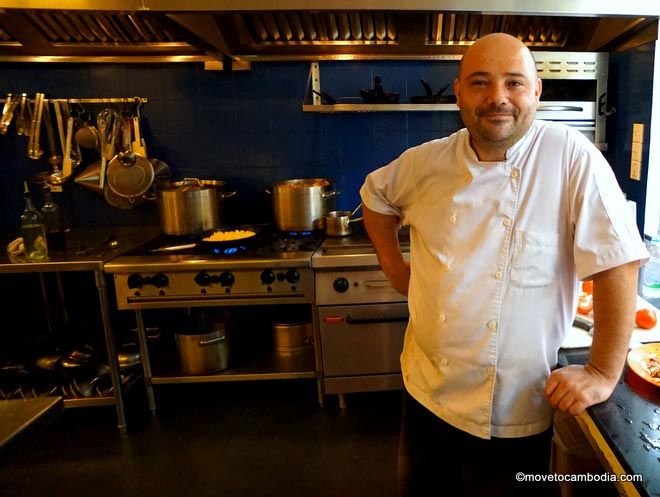 It’s important to use glucose in making the sorbet, as it will stop the mixture from crystallizing and freezing too hard.

If you don’t have an ice-cream maker, but you do have a sturdy food processor, you can make the sorbet as follows, starting the day before you plan to serve it: Put the coconut cream mixture from step 7 in the freezer and allow it to freeze halfway, then mix it up with a fork. Leave it to freeze overnight. The next day, chill the bowl of your food processor in the freezer. Chop up the frozen sorbet mixture, then place it into the cold food-processor bowl and blend until smooth. However, your processor should be good and strong in order to accomplish this. If you do not have access to either an ice-cream maker or a sufficiently powerful food processor, buy coconut sorbet or ice cream instead. 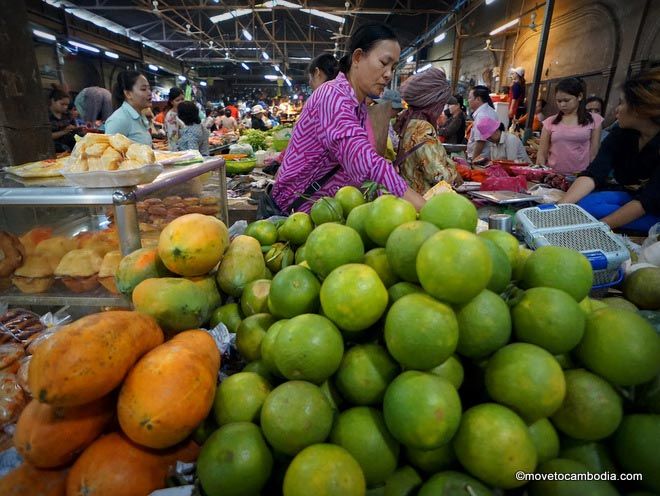 Cooking up a storm at Siem Reap’s Psar Cha.

If you’re in Siem Reap, be sure to make a reservation at Chef Rivière’s restaurant, Cuisine Wat Damnak. The restaurant will be closed from March 29 to May 4, so make your reservation now!