Posted on September 4, 2019 by Steven Halcrow
Get a quote for expat health insurance

The growing ranks of globe-trotting vegetarians and health-conscious omnivores have fueled a noticeable rise in the number of meatless eateries in Cambodia. Now comes Banlle — ”vegetable” in Khmer — the new plant-based project of one of Cambodia’s brightest culinary innovators, Pola Siv. The founder-owner of Mie Cafe, a critically acclaimed and much beloved Siem Reap institution, is venturing into new territory with Banlle, and I’m happy to report that his flair for innovation and attention to detail have not deserted him. In fact, the challenges of his new project seem to have spurred his creativity, and he tells me that he’s “having a lot of fun” in his new space. 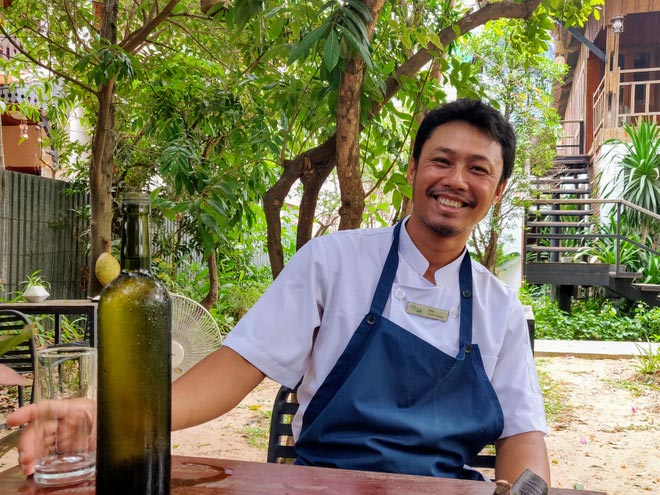 The restaurant is beautifully laid out and the service was very warm and welcoming. I chose to sit in the garden, as it was a nice evening, and the staff provided a fan, since Siem Reap is not known for being breezy. As a long-time admirer of Mie Cafe, I wanted Siv’s new place to be good, but a cynical carnivorous voice in my head kept predicting that I would be queueing up for barbecued chicken on Road 60 by the end of the night. Luckily, that cynical voice in my head was soon put to rest.

The menu was a lot more varied than I expected and did not look as though it had been copied from the pages of Marie-Claire. There was genuine thought and consideration behind it and a clear attempt to create something that is mostly locally sourced and genuinely accessible. Nary a Buddha bowl or acai berry in sight! And, they don’t use plastic straws or other single-use plastics and are trying to have the smallest eco-footprint possible. 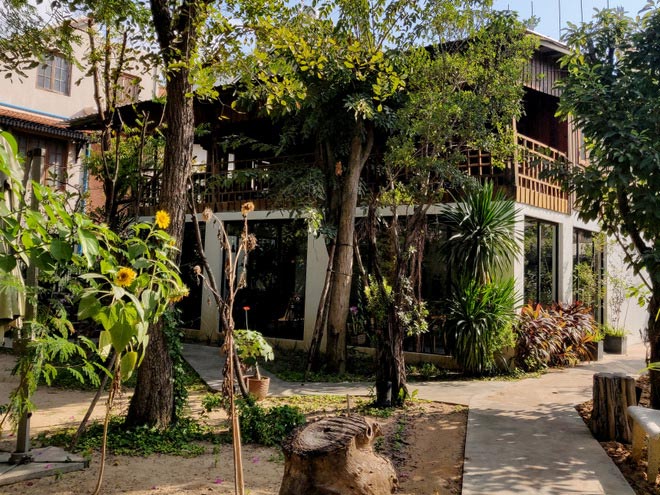 I opted for the tasting menu, because I wanted to try lots of things without ordering six full portions (not least because ordering enough food for four people when dining alone might have made the table next to me somewhat uncomfortable). Siv told me that he is working on introducing his tasting menu and what I got was a bit of a prototype.

I was thoroughly impressed with the different ways that each dish had been conceptualized, even though the tasting array — all vegan — did rely heavily on tofu. But it was seasoned and presented perfectly and showed the flair and ingenuity that are so often missing in a lot of plant-based establishments. A vegan version of a Siem Reap classic, prahok ktis, got its flavor from fermented tofu, while a large mushroom wonton, beautifully wrapped in a cabbage leaf, was served in a delicate shiitake broth. A reimagining of another Cambodian home-cooked staple, kaw jeurng chrouk — typically a leg of pork slow-cooked in palm sugar with duck egg and bamboo shoot — replaced the pork with tofu and ditched the egg, and the result was delicious. While the menu was a work in progress, there was far more to enjoy than to criticize. 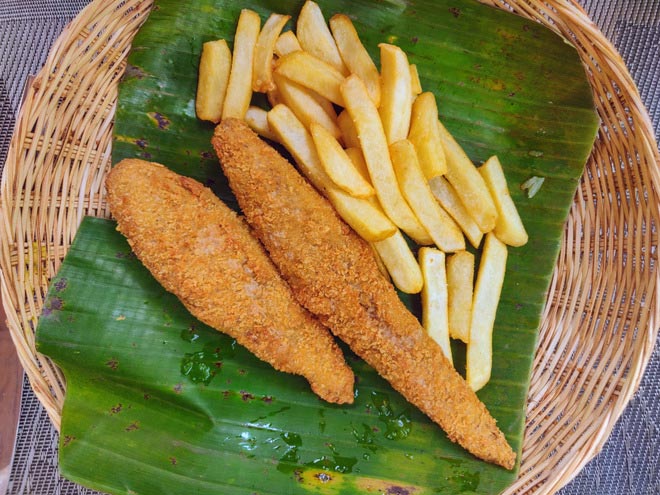 Vegan “fish” and chips at Banlle.

I went back the next day to check out the full menu, which features a lot of choices, all reflecting Siv’s trademark precision and the skills he learned working in kitchens in Europe and the Cayman Islands. Banlle offers plenty of fresh salads and vegetable-based Cambodian curries and a comfort food section with some deep-fried goodness, even a vegan version of fish and chips where the “fish” is actually banana flower.

I must admit my curiosity about this dish was only matched by my cynicism. Given the still ongoing jackfruit-as-a-meat-substitute frenzy, would this prove to be just another unconvincing attempt to fob a plant off as meat? But even though I’m well familiar with banana flowers and the various ways they are used in Cambodian cooking, there were bites of Siv’s banana-flower “fish” that had me swearing I was eating something that had once swum in water. Texturally something in between salmon and seabass, it even sort of looked like fish. I was very pleasantly surprised and enjoyed it far more than I have many interpretations of actual fish and chips I’ve tried in Cambodia. At the time of writing it was being served with a sriracha, but Siv has since introduced a vegan tartar sauce that I will be interested to try next time I visit. 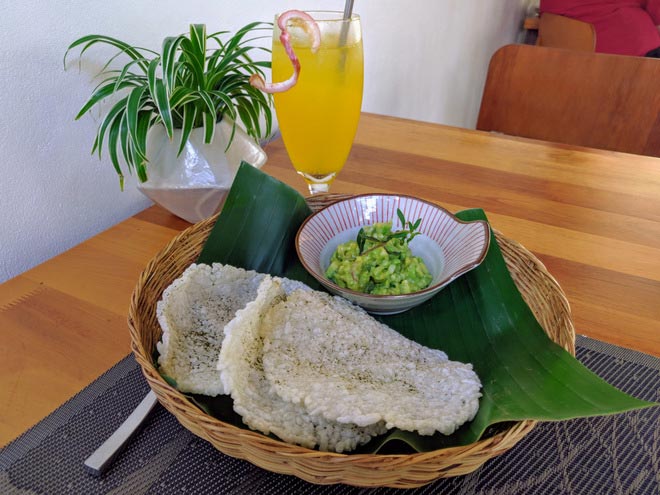 Sticky rice crisps with guacamole and house-made “Fanta” at Banlle.

For vegetarians who have not gone all the way vegan, the menu has a meat-free section that uses items like cheese and eggs. And for those who are trying to wean themselves off of soda pop, Siv even makes his own versions of Pepsi and Fanta.

One of the most striking things about the menu was the prices. It’s easy to think of vegan and vegetarian fare as something that should be cheap, but at Banlle so much skill, care, and dedication has been poured into the food that the prices seemed insanely low to me. I suspect that the restaurant is trying to appeal to travelers and residents by offering budget prices, but in my opinion Banlle is selling itself a bit short. The food being offered more than holds its own when compared to what’s being served in many other restaurants in town, vegan, vegetarian, and meat-serving alike.