Posted on January 4, 2013 by Lina Goldberg
Get a quote for expat health insurance

Since Pacharan closed, Phnom Penh has been in serious need of a tapas bar. Latin Quarter sometimes does the trick, but expats have been bemoaning a real tapas bar. Enter La Plaza over the summer. 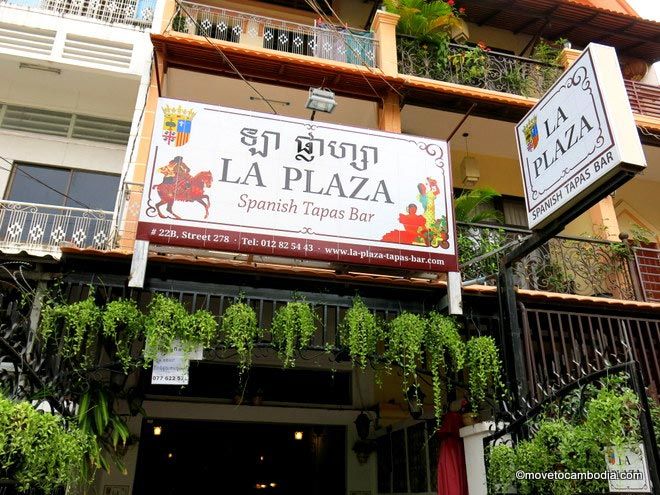 La Plaza even (practically) looks like a real tapas bar!

I’ll admit that I was delighted when I first heard about La Plaza, and less so as I heard more and more reviews. Apart from the opening month or so (check out Lauren Crothers’ rave in the Cambodia Daily) La Plaza has been getting consistently mixed or bad reviews via word of mouth and HungryGoWhere. Some friends have slated it completely, others have said that it really depends on what you order–some dishes are delicious and others are disgusting. So although I wasn’t in any real rush to get to La Plaza, I finally managed to waddle over before the holidays and was pleasantly surprised. 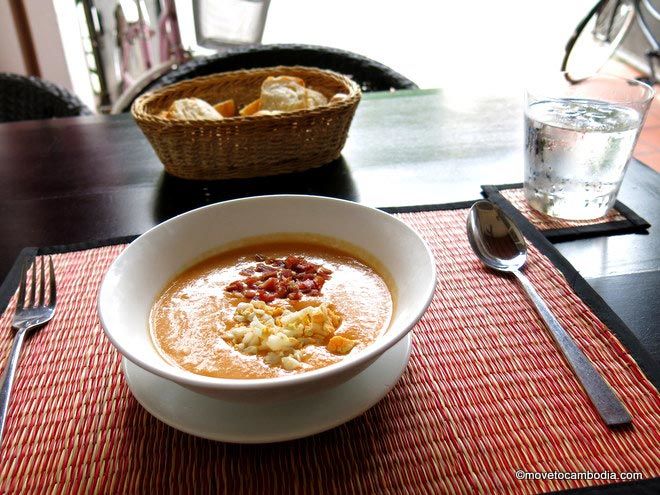 Salmorejo, it’s like the gazpacho that tells celiacs to GTFO.

I ordered two of my favorite dishes, salmorejo, a soup made of fresh tomatoes and bread, served with hard boiled egg and jamon on top, and Mekong “boquerones.” Traditionally, boquerones en vinagre are small anchovies cured in vinegar and are my favorite thing to stuff my face with in Spain. La Plaza’s version uses a small Mekong fish instead and the locally available curly parsley. It’s not as good as what you’d get in Spain, but the fact is, the needed ingredients just aren’t available in Cambodia and La Plaza’s attempt using what’s available is pretty good. For $4 and appearing on the table with a plate of bread, it’s also good value. The salmorejo (also $4) was delicious and I’d definitely go back just for that. 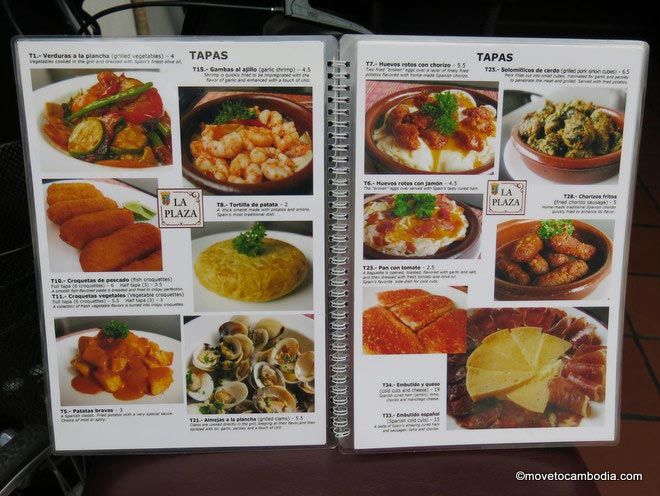 The place is owned by Spanish expat Javier Sola and run by his Cambodian wife, Sina, who lived in Spain for a year. What I’m about to say is contentious (but backed up by dozens of examples): when Cambodians are left in charge of good ethnic restaurants with little oversight, the results are almost always, eventually, terrible. While Sina is friendly and clearly has a lot of experience with Spanish food, the place could do with more input from Sola himself, if only to make sure that everything still tastes as authentic as it did in the restaurant’s opening months.

That said, La Plaza clearly has a lot of potential and I’m more than willing to keep chipping away at the menu–which contains 34 different tapas and several paella dishes, plus happy hour tapas and sangria specials–to find out which stand out as the most mouth-watering.