The Khmer culinary mind behind The Empire

Posted on January 11, 2013 by Lina Goldberg
Get a quote for expat health insurance

For Veasna Kay, cooking has always been a passion. He was raised in a family of rice farmers, but today the handsome 25-year-old has found his way to becoming a chef–a chef who has succeeded in adapting Khmer cuisine to suit the Western palate. His venue is the Empire, a cosy bar and restaurant on Street 130 that serves up a range of delicious Khmer and Western dishes. Run by Veasna and his British partner, Niall Crotty, the Empire offers fare from both owners’ worlds, featuring fish and chips and bangers and mash alongside Khmer curry and Cambodian rare beef salad. 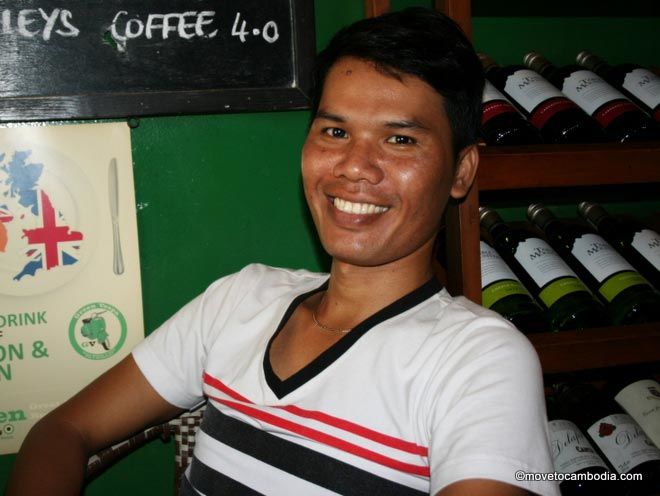 Seth Sina, aka Veasna Kay, the chef and co-owner of The Empire.

Veasna, real name Seth Sina, grew up in Kampong Cham, the youngest of six. As a boy he was expected to help in the family rice paddies with his brothers, a job that he abhorred. At age 12 he abandoned farming and focused his energies instead on the family kitchen, where he began learning to cook with his mother and sister.

One thing he learned was how to prepare a meal for his family of nine for less than 500 riel. He’d fish and catch crabs, harvest vegetables from the family garden and only need to buy a little bit of prahok, sugar and salt each day before he started cooking. “Cheap cheap,” he told me, with an infectious laugh that lights up the Empire.

Niall and Veasna, who’ve been together for three and a half years, were some of the first people I met when I moved to Phnom Penh, and their dinner parties were legendary. “I’m rubbish at cooking,” Niall confessed. “After we first met he said, ‘I’ll take you to the market and cook you something.’” The results were fantastic, Niall recalls.

“Later, we started having people over, just a few friends or couchsurfers, and eventually we ended up having giant dinner parties every week. People said, ‘This food is amazing! You should open a restaurant.'” Two years ago that’s exactly what they did. Their restaurant, with its intimate ambiance, still retains the feel of a dinner party, especially when Niall and Veasna are on hand to chat with the customers. 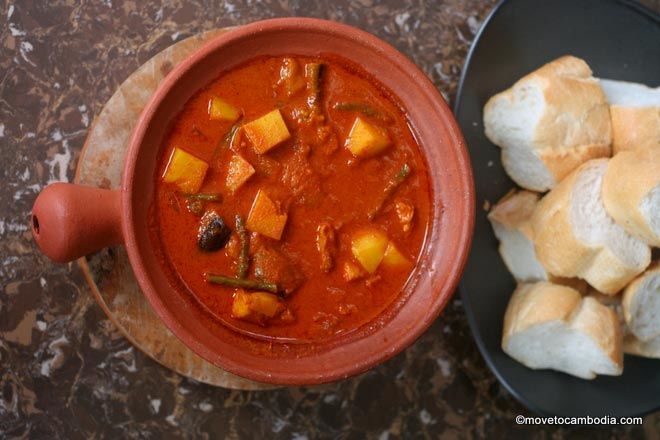 Before discovering his culinary destiny, Veasna had harboured hopes of making it as a singer and tried studying marketing in school. It was only after meeting Niall that he realized his talent in the kitchen could become his calling. With Niall’s encouragement, he attended a local cooking school for a few months. He was top of his class and further developed his natural ability to recreate just about any dish after trying it only once.

In addition to Cambodian homestyle cooking, the Empire offers Western dishes that Veasna had never tasted, let alone made, before meeting Niall. In addition to standards such as steaks served with British-style chips and chili con carne, he sometimes brings the two cuisines together, as in his deliciously creamy beef pasta flecked with spicy chilies.

While the international dishes at the Empire are quite popular, for me it’s Veasna’s Khmer offerings that stand out. They are made with a Western palate in mind, sanitized of prahok and served without bones, but at their core they are typical Khmer comfort foods, satisfying and tasty. I enjoy the Khmer beef soup–with its delicately spiced broth and tender chunks of beef it’s not only nourishing, but sublime. Another favorite is the red curry, served with French baguette. “The first time we served it was as a one-off on Veasna’s birthday,” Niall told me. “But people loved it so much that we added it to the menu.”

Veasna smiled, clearly proud of the fact that his cooking, once so popular with his family, is now being enjoyed by Westerners who may have never tried Khmer food before. “When foreign people eat it,” he said, “they say it’s delicious.”

Veasna has moved on from the Empire and is now running his own business offering cooking classes and private dining experiences.  Learn more at Veasna in the Kitchen and check out his great Khmer cooking videos.