How to decide if you should give birth in Cambodia

Posted on October 14, 2014 by Lina Goldberg
Get a quote for expat health insurance 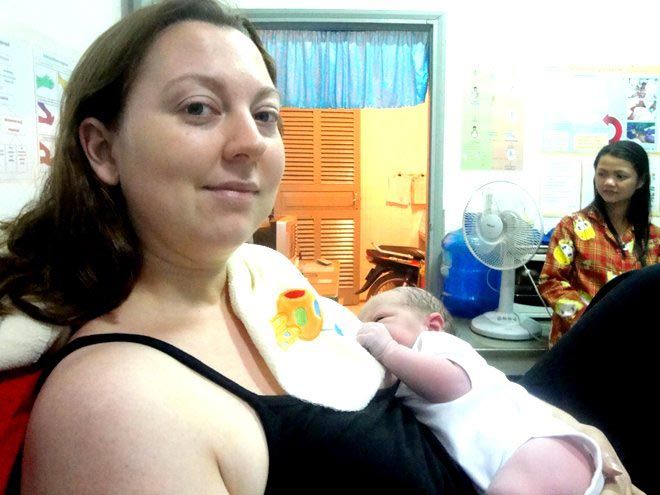 Mom and baby after an uneventful and happy birth in Siem Reap.

We talked to four expat moms about how they decided to have a baby in-country or to leave, and what factors you should consider when making this decision.

Rachel: “I decided to have my second child in Cambodia as it was my home and we had the existing set up family support for our then young daughter. I also did not wish to spend a month or so in Bangkok. I had gone home to the UK for the birth of my first child and as everything went well with a natural birth, I decided that I was comfortable having the second baby here with the support of an experienced British midwife in a local government clinic.

Pain relief was not widely available however so there was no gas and air for example, which helped with the delivery of my first child. I was happy with my experience, we were at the clinic for only three hours before returning home with our new baby, and would deliver a future child in Cambodia if there were not signs of complications.”

Barb: “I had a baby in Phnom Penh earlier this year. I chose Royal Rattanak Hospital after being referred by medical professionals that I trusted. My pregnancy was considered higher risk going in; it was my first baby and I am in my late thirties. I was prepared to travel to Bangkok via taxi if the monitoring showed any risk to the baby or myself, but it ended up not being necessary. I also stayed in contact with my family doctor in Australia when I wanted a second opinion.

I was kept on fetal monitors throughout the labor, which measure the baby’s heart rate and contractions. This meant that I couldn’t get up and walk around between contractions or anything like you read about in the natural childbirth books. No showers or birthing pools or anything like that. It was just old school lie on a bed and have a baby, a lot like how it looks in the movies, but far less pleasant.

I had intended to have a natural childbirth, but ended up requesting a C-section after about eight hours of labor. The extra staff had already been placed on standby in case this happened and they arrived very quickly. The entire procedure was explained before it happened or while it was happening, and I wasn’t afraid. 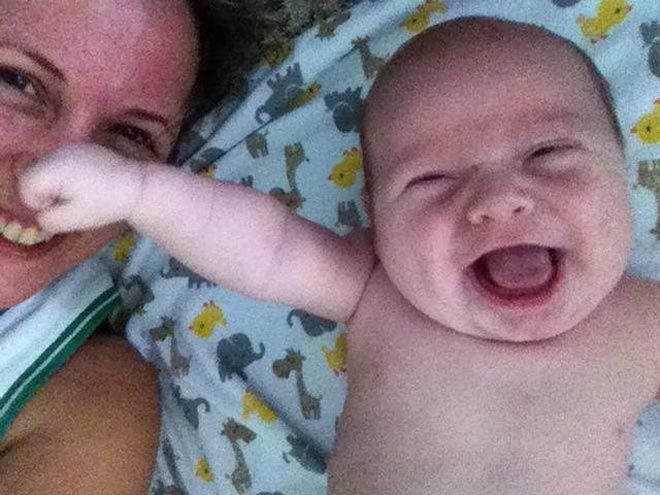 This happy baby was born in Phnom Penh.

I know having a baby in Phnom Penh isn’t for everyone. I’ve lived in Cambodia for nearly ten years and would have felt very isolated in Bangkok. The other option was to go to Australia, but you have to fly so early and wait for paperwork, so it ends up being around three months, and my work and business commitments would have made that difficult. I have heard the criticisms of my decision to have my child here, but I can assure everybody that my decision was considered and not entered into lightly.”

Narisa: “I can’t speak to options in Phnom Penh, but in general I would go to Bangkok rather than stay in Siem Reap for any in-patient medical procedure. In general the level of medical care and comfort is much, much higher–there is a choice of hospitals and I looked at Bumrungrad, BNH and Samitivej–all very good hospitals. Also in Bangkok there is a large community of doulas and I wanted to have a doula with me during my birth.

Samitivej in particular is known for being very good for natural birth. They have two very large, comfortable and attractive (for a hospital) birthing rooms, with a tub, mattress, chair, and various other things (railing to lean on, giant balance ball, etc). There is room to walk around and plenty of room for husband and doula to be present. As it turned out, I ended up not having natural birth but a C-section instead. The nurses in the maternity ward are extremely experienced and helpful, and the maternity ward itself is separate and private from the rest of the hospital, with a security guard at the entrance.”

Kirsty: “There are obviously a million what-ifs, and pregnant woman face those every day anyway. For me, the risk of alcohol wasn’t worth it so I abstained. But risk of soft cheeses be damned, and I ate those. Both can have terrible outcomes, but I did what I was comfortable with. Basically, deciding whether or not to deliver your child in a developing country comes down to gut feeling. I was comfortable staying my entire first pregnancy, the second I left earlier on medical advice which I strongly agreed with.

A pregnant woman needs to consider how much support she’ll have, how comfortable she is with the hospital, how much pre-natal testing she’s comfortable with and if she wants to travel for some or forgo it. But ultimately she has to ask herself a question that haunted me throughout my pregnancies – what if? If your child is born too early but would have survived if you’d gone home, if you get substandard care and your child is deprived of oxygen during delivery, if their neck gets broken, if you’ve given an archaic solution to something routine, if you can’t establish breastfeeding, if you get PPD, if you’re given a c-section that leaves a Frankenscar, if you don’t heal well or have a serious injury during delivery, if baby has a defect, if you’re tricked into believing a local old wife’s tale and it harms your baby or yourself…if something happens that you come to realize was entirely preventable or could have been managed more simply if you were in a developed country. What if?

For me, in the end, I left the first time because I wanted to be around my sister and really, really didn’t want a C-section. It was absolutely the right choice for me and I don’t regret it for a minute. I also don’t regret being pregnant in a developing country and having to leave in a hurry second time around (and I’m really glad I left as all predictions came true). Instincts are really important.

Whatever people choose to do, even just to be pregnant in a developing country, self-education is key. The parents need to know what is done in the West and how to manage the differences as best you can. To know where to look for support and advice, because having the baby is only the beginning.”