Is it safe to visit Cambodia right now?

Posted on January 7, 2014 by Lina Goldberg
Get a quote for expat health insurance

If you’ve been following the news, you might be worried about visiting Cambodia right now. Protests by the opposition party (CNRP) have been going on since the August election that left the ruling party (CPP) with a thin margin of votes, a thin margin that the CNRP says they didn’t actually receive. Over the last week, though, garment factory strikes turned into violent demonstrations, and the government used force to clear Phnom Penh’s Freedom Park of protesters. So, what does this mean for you, you might wonder? 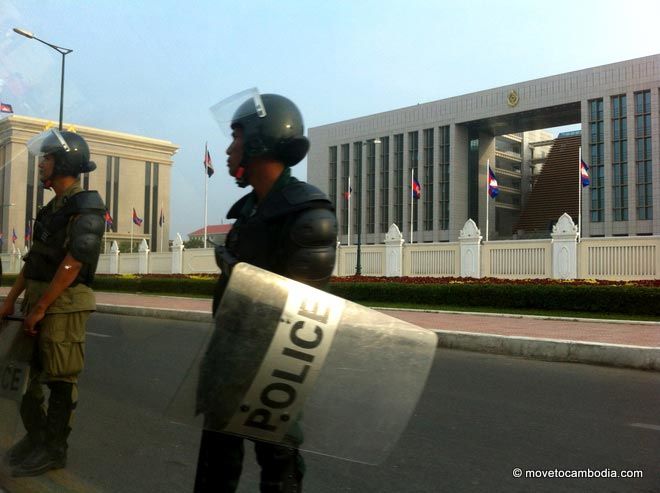 Phnom Penh is in a state of alert, but a drowsy sort of alert.

Very little. While this may seem like the end of days for those reading the long-term expat Ken Cramer, who has seen this sort of thing before.

While the protests in Phnom Penh’s Freedom Park were going on over the last few days, I walked around the riverside, the city’s main tourist area. Had I not known about the protests, I would not have realized anything was out of the ordinary–everything in Phnom Penh is completely business as usual. Restaurants, bars and movie theaters are open and tourist attractions are not currently affected.

It’s important to note that while some of the protests have turned violent, no tourists or expats have been targeted. Both the CPP and CNRP are well aware that tourism drives Cambodia’s economy and no one wants to do anything to endanger those tourist dollars. So even when protests are happening at Freedom Park, the tourism industry has been entirely unaffected. The garment factory demonstrations have been the most violent, with several strikers being killed, but this took place outside of central Phnom Penh, in an area no tourist would ever find himself.

The best advice we can give is that visitors should avoid the protest areas and if they see anything that looks like a demonstration, protest or large group of people, it’s best to avoid the scene. Yesterday the protests were banned, and citizens are not allowed to gather in groups larger than ten people, but it remains to be seen if these rules will be followed. If you do see a protest, going to take photos, watching or getting involved is not advised, because when billy clubs start swinging they’re just as likely to crack your melon as anyone else’s.

Right now all of the protests are happening in Phnom Penh and Siem Reap, Kampot, Kep, and Sihanoukville are entirely unaffected. In Phnom Penh the worst that tourists may experience is some slight traffic delays when there are marches happening, but even those are fairly minor.

It’s likely going to be several weeks before the next stage of Cambodia’s political future becomes clear. If the situation does escalate, we’ll revise our advice at that time, but for now, don’t worry about coming to Cambodia.

10 Responses to Is it safe to visit Cambodia right now?