Posted on December 19, 2013 by Lina Goldberg
Get a quote for expat health insurance

Looking for something more current? Check out our updated list of Siem Reap Christmas dinners for 2015. 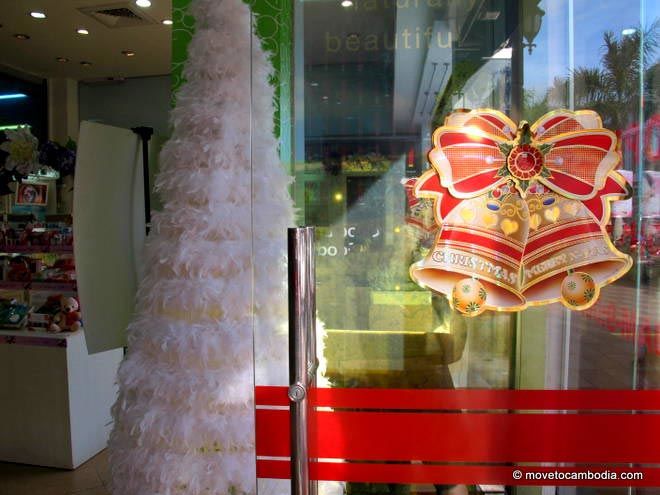 Backpacker favorite X Bar is offering what appears to be the cheapest Christmas Eve dinner in the country, at only $6 per person. Dinner starts at 8:00 p.m. on December 24th and features stuffed and baked chicken breast with roasted potatoes, fresh vegetables and red wine gravy. There will be live music from 8 p.m. until midnight with Cambojam and the Xrays, and then live DJs will keep you going until Christmas morning (although it is unclear if Santa will fill your X-Bar stockings, apparently his reindeers are afraid of the DJs). You can pre-book your dinner via this Facebook event page, or by calling Rick at 017 363 590, or you can book in advance at the bar.

Irish pub and restaurant Molly Malone’s is offering Christmas dinner special from 12 p.m. on December 25th for $28.75 per person, only a 25 cent rise from last year which is astounding considering the levels of inflation. You go, Molly Malone’s. This year’s menu starts off with a glass of mulled wine, then onto starters of cream of mushroom soup and a classic prawn cocktail, and then a choice of mains. Your options are a traditional roast turkey with sage and onion stuffing with potatoes two ways (roasted and mashed) cauliflower cheese, steamed seasonal vegetables, gravy and cranberry sauce or grilled Tasmanian salmon with hollandaise sauce and the same Christmassy sides as the turkey. For dessert they are offering a chocolate, raspberry and cream yule log. Kids get a two-course menu with a soft drink for $15.75. Reservations are suggested.

Gigi Brasil suggests you try a different sort of Christmas…the Brazilian sort. This means a churrasco-style dinner that consists of lots and lots and lots of grilled meats, including picanha and maminha (Brazilian-style beef), sausages and chicken wings and hearts. The meats will be accompanied by roasted corn and pineapple, skewered vegetables, garlic bread, salad, dessert and a glass of red one or a classic caipirinha. They’re serving it up on Christmas Eve from 6:30 p.m. until 9:30 p.m. and on Christmas Day from 12:30 p.m. to 3:30 p.m. for $35 per person.

If you’re in the mood for a Scandinavian Christmas (and why wouldn’t you be?) Soria Moria Hotel is having a Christmas Eve celebration starting at 6 p.m. that will get you into the Scandinavian Christmas spirit. Did somebody say gløgg? We’ve heard good reports from those who have been in years past, so this seems like a good option. The dinner will be ham and pork belly served with potatoes, broccoli, carrots, sauerkraut & pease pudding and of course brown gravy sauce. There will also be potato salad, garden salad, scrambled eggs with Norwegian salmon, cured ham, egg halves, anchovies, and a selection of breads. For dessert there will be rice pudding with berry sauce, gingerbread and assorted Christmas cookies. And of course there will be free flow gløgg (gluhwein/Scandinavian mulled wine), soft drinks, beer and wine.

Palate is a new restaurant on the river opposite FCC and they’re having a Christmas Eve dinner for $35 per person.The five-course dinner starts off with seafood and mushroom spring rolls and chestnut soup with black chicken and asparagus, then a traditional Christmas turkey with honey-baked ham, brussels sprouts and porto wine gravy or sea bass fillet served with baby potatoes, English spinach and tom yam and coconut foam with a traditional Christmas pudding for dessert. Musician Jim Latt will be playing live music throughout. Reserve in advance by calling 063 955 252.

Il Forno is offering a Christmas dinner this year on the 24th, 25th and 26th.  They’re offering two menus, one from the land and one from the sea. The land menu features a starter of crespell with speck, radicchio and taleggio, then a pasta course of tortelloni di ricotta and spinach with white ragout and fillet mignon on crispy potatoes with porcini mushroom sauce as the main and chocolate bread pudding for dessert. The sea menu starts off with homemade blinis with Sicilian tuna tartare, then a pasta course of black and white ravioli with seafood and saffron sauce, then pan-fried seabass as the main with vanilla sauce and sweet potato mash and dragonfruit pannacotta with passionfruit reduction for dessert.  Both options are $50 and come with a glass of wine, and if you’d like to order items ala carte, that is also possible. Reserve in advance at 078 208 174. Walk-ins are welcome but spaces are not guaranteed.

The FCC Angkor is offering a swankier affair in Siem Reap than at FCC Phnom Penh (in your face) on December 24th and 25th. Their set menu is $55++* per person and starts with a Champagne cocktail. The menu starts with canapes (smoked salmon, dill and cucumber on blinis and crisp pork belly with vanilla-infused apple sauce), starters of duck and chicken terrine en croute with foie gras and micro-salad and lemon and lime sorbet, then on to roast turkey with roasted vegetables and potatoes with all the trimmings and a cranberry jus, and baked Alaska and chocolate petits fours for dessert. Reserve by calling 063 760 283.

The ever-popular Christmas Day brunch at Raffles Hotel is happening again this year, and those in the know advise getting there early — ie. before the festivities start at noon when Santa shows up and gives gifts to the kids. There’s a children’s choir that will be singing in the lobby and a pianist that will charm you with Christmas tunes for the duration. The buffet starts at noon and features a sushi and sashimi buffet, pastas, salad bar, a selection of Asian and international hot foods, carvery, cold cuts, cheeses, soups, and desserts (including a yule log). Basically the menu is very long and you’ll leave stuffed. Price is $40++ for adults, $26++ for kids 5-11 and free for kids under 5. Reserve in advance.

If you want to blow some cash on Christmas Eve, Raffles also has a comprehensive program that includes pre-dinner cocktails, a buffet dinner by the pool which will be filled with thousands of floating candles, a Khmer cultural show, a children’s choir singing Christmas carols, and an appearance by Santa who will bring gifts for the kids. The buffet will feature a barbecue station and no less than a whole suckling pig and whole chickens on spits. Cost for adults is $105++ and kids 5-11 are $55++ (and it appears that kids under five eat for free). It is highly recommended to make a reservation 24hrs prior to the event by calling 063 963 888 or emailing [email protected]
.
1 Charles de Gaulle Avenue
T: 063 963 888[email protected]

Le Meridian Angkor is having a ‘Christmas Eve Gala Dinner‘ that includes an international buffet, live band, songs, Christmas carols by a local choir, and a Cambodian cultural dance performance.  The spread promises to be lavish, with more than a dozen types of appetizers and salads, a falafal station and a moutabal station(seriously), chilled soups, a salmon station, crab cakes, foie gras, pate, traditional turkey with stuffing, half a dozen other mains, a pasta station, a selection of Khmer dishes and a barbecue station. For dessert there’s a Yule log station with no less than four types of Yule Logs, a creme brulee station, a macaradone station, tarts (the dessert), a chocolate station, an eclair station, and a gingerbread house.

Price is $ 90++ for adults and US$ 45++ for kids 4-11 and includes free flow soft drinks, water, chilled fruit juice, local beer, tea or coffee, and house wine. They also have a special rates for residents of Cambodia at $65 per person, and it is suggested that you make a reservation in advance.

There are a few more places including the Victoria Angkor Resort and Tangram Garden offering Christmas dinner that you can find more details about on this thread in the Siem Reap Expats and Locals Facebook group.

*All of the hotel prices are ++, which means they don’t include various taxes and VAT. Expect to pay an extra 10% above the listed price.