Posted on December 20, 2012 by Lina Goldberg
Get a quote for expat health insurance

Looking for something more current? Check out our updated list of Siem Reap Christmas dinners for 2015.

Don’t worry, Siem Reapists, there are dining options for Christmas in Siem Reap, too! As per usual, many of the major hotels are offering Christmas Eve and Christmas Day dinners, and some smaller establishments are, too. 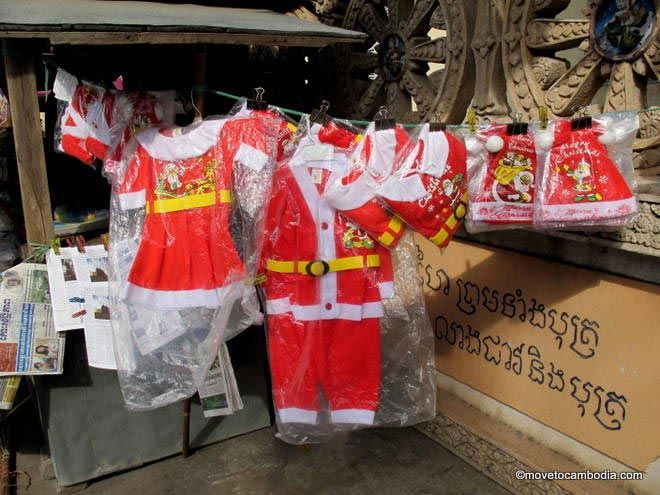 Unfortunately no pics of Christmas dinners in Siem Reap, hopefully this photo of Santa Claus outfits for toddlers will suffice.

Here are a few options for Christmas dinner in Siem Reap:

My favorite restaurant in Siem Reap is offering a set menu on the evening of December 24th and December 25th for $40 per person. The Cuisine Wat Damnak menu is usually four or five courses plus an amuse bouche and having just eaten two meals there last week, I can assure you that it’s outstanding value for money. It won’t be a traditional Christmas dinner, that’s for sure — Cuisine Wat Damnak specializes in exceptionally delicious creative Cambodian cuisine made with local ingredients. So even though they have not released the menu for Christmas yet I would make a reservation as quickly as possible, because they are definitely going to be fully booked.

Irish pub and restaurant Molly Malone’s is offering a Christmas dinner special from 12PM on December 25th for $28.50 per person. Start off with cream of pumpkin soup, salt and pepper prawns with lemongrass mayo and proceed to traditional roast turkey with stuffing or grilled Norwegian salmon served with roast and mashed potato, cauliflower cheese, seasonal veggies and gravy. For dessert they are offering a chocolate, raspberry and cream yule log plus a free glass of mulled wine. Reservations are suggested.

The ever-popular Christmas brunch at Raffles Hotel is happening again this year, and those in the know advise getting there early — ie. before noon. The enormous buffet lunch costs $38 for dinner and there will be Christmas carols and a visit from Santa for the kids.