Posted on April 13, 2019 by Lina Goldberg
Get a quote for expat health insurance

Look around and you’ll see Khmer New Year, Chol Chhnam Thmei, being celebrated around the country. The holiday is Cambodia’s most important, bringing the country to a near standstill as city residents head home to the provinces to spend time with their families, have parties and visit their local pagoda. 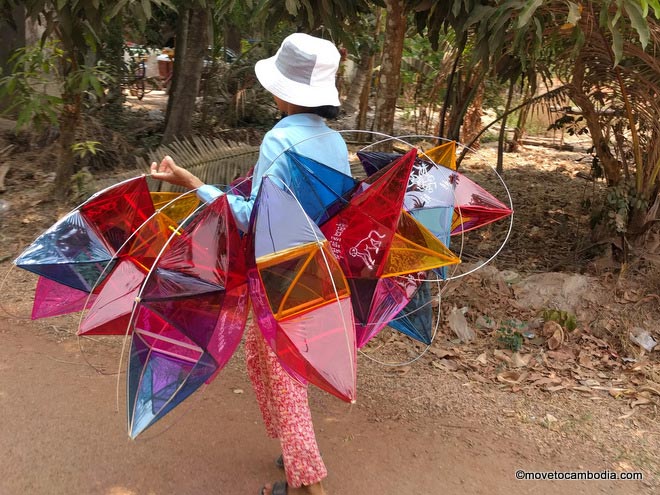 Khmer New Year “stars” being sold along the side of the road in Siem Reap. Most families get one to hang outside of their home.

The holiday celebrates the end of the harvest season and marks the start of a new year (and also the start of the truly hot hot season). Although the holiday is officially only three or four days long—in 2019 it’s April 14, 15, 16—it can extend onto one or both adjoining weekends, and often even a few days before that. In the days leading up to Khmer New Year, prices, especially for transportation, can go much higher than usual.

It’s true that Cambodians get to have an awful lot of new year celebrations, and it was pretty recently that we celebrated the Gregorian or international new year in January and then Lunar New Year (also called Chinese New Year) in February. But Khmer New Year is different — it’s Cambodia’s most important holiday and one of the only times during the year that Cambodians get substantial time off from work. Houses are decorated with stars, fairy lights, plants, and various food and drink (usually Fanta) offerings, and everyone wears new clothes. There are always several pop songs released by Cambodia’s most popular singers every year in celebration of Khmer New Year—this is what 2019 has to offer. 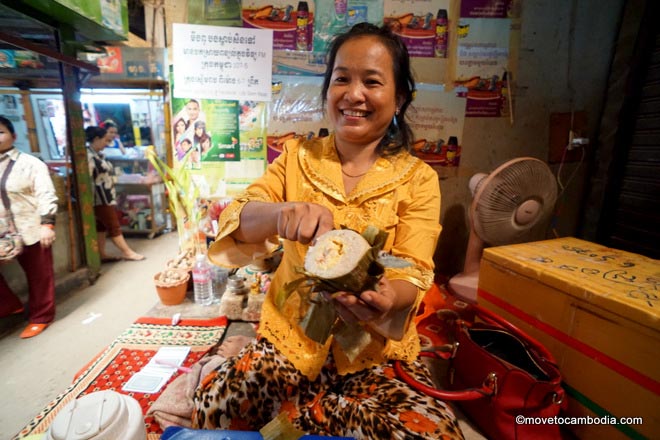 Traditionally, Khmer New Year was when everyone who was born in that year would count themselves a year older. So in a sense, it was every Cambodian’s birthday. This goes a long way to explaining why you’ll hear booming music out of most houses in the countryside this week, and why you’ll hear endless amounts of karaoke until the wee hours. It’s a birthday party for the entire country! These days, though, more and more Cambodians are keeping track of their actual date of birth, but that hasn’t stopped everyone from partying  at Khmer New Year.

On the first day of Khmer New Year, called Maha Sangkranta, people wear new clothes to welcome the “angel” of the new year that comes on this day. In preparation they clean and decorate their houses and put special food offerings on the spirit houses outside of their homes. It is also traditional to wash in holy water three times, and to bring food offerings to the monks at the pagoda. 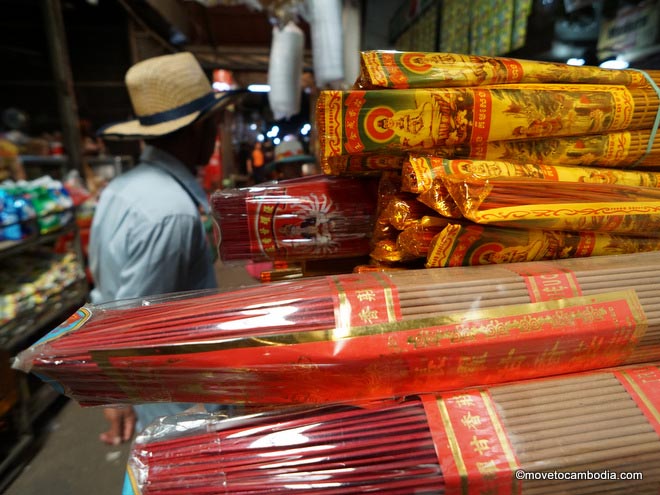 Incense on sale in Siem Reap in preparation for Khmer New Year.

The second day, Vearak Vanabat, is the Day of Giving, and Cambodians traditionally give gifts to their families and make donations to the poor, as well as going to the pagoda for blessings. On the third day, Vearak Loeung Sak, it is traditional to wash statues of Buddha and one’s elders with sweet-smelling water, and of course, another visit to the pagoda.

During Khmer New Year, Phnom Penh is eerily quiet, with most restaurants and businesses closed to allow their employees to head home. In Siem Reap, it’s just the opposite. The city is festooned with New Year’s stars, and the road to the temples have holiday decorations all over them. It’s a holiday tradition to head to Pub Street, and for once, tourists are barely visible among the thousands of Cambodians that are out, enjoying the live music and performances. 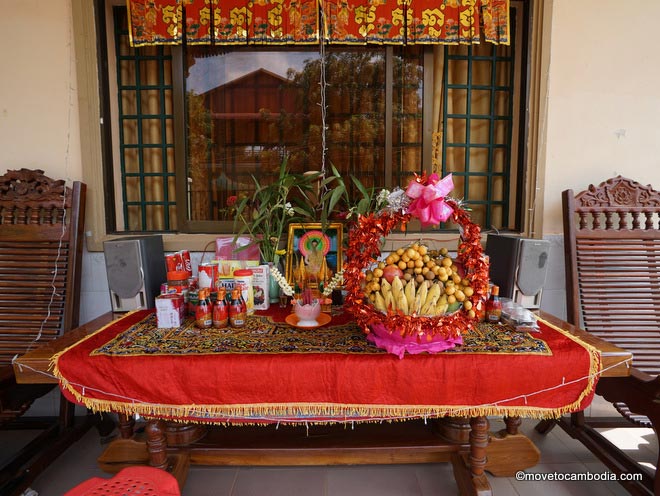 A typical household display of offerings for Khmer New Year.

In Siem Reap, a three-day New Year’s event at the Angkor temples called Angkor Sankranta takes place that is very popular with Cambodians who go to play traditional games. For the last two years running, there were world record set for the largest sticky rice cake in the world made from sticky rice, mung bean, and pork, and then later a rice cake-eating contest. Unfortunately there will not be any events at the temples in 2019, but there are events taking place around the country.

In Phnom Penh, there are usually fireworks and you’ll see impromptu parties set up with a boombox playing Khmer tunes in the street. Cambodians who haven’t been granted enough time off from work to head to the provinces wander past, stopping to have a cheerful dance in the streets. Wat Botum Park is also a good place to visit to see traditional games being played, and this year, in 2019, there are festivities planned at Wat Phnom.

Khmer New Year is a good time to get out of the city and check out the countryside, where you’ll find lots of parties, friendly neighbors and happy children. Don’t be surprised if you’re invited to join in the celebrations. Susaday Chhnam Thmei!