Italian on the Islands

Posted on January 30, 2013 by Lina Goldberg
Get a quote for expat health insurance

Note: This post is out of date! La Mami has now become Da Matti? (but they still have homemade gnocchi and ravioli, traditional Italian pastas, and interesting cocktails). Read our full review of Da Matti? here.

The Cambodian islands are full of surprises, not least of which is their curious emergence as a hotbed of Italian cuisine. While it’s true that you’ll find spag bol on the menu of every beachside shack on Serendipity, the results are uniformly disappointing. But venture a little further, to the islands of Koh Rong or Koh ta Kiev, and you’ll find some of the country’s best Italian food. 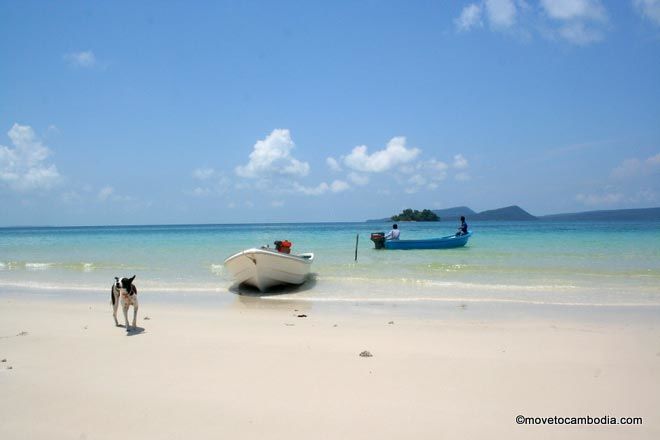 The view from Pura Vida on Koh Rong.

Beatrice Falchini and Fabrizio Polci fell in love with Koh Rong when they first visited two years ago, and they’ve been back repeatedly. In early 2012 they opened Pura Vida, a small operation with a couple of bungalows and a restaurant on one of the island’s most picturesque beaches where developers are slated to build a luxury resort. “I said to Fabrizio, we need to go now,” Falchini said, explaining why they made the move from Rome to an undeveloped island off Cambodia’s coast. “We don’t know how much longer it will last. When they start to build the resort – when it will be like all the other islands in the world – we can go back to Italy.” 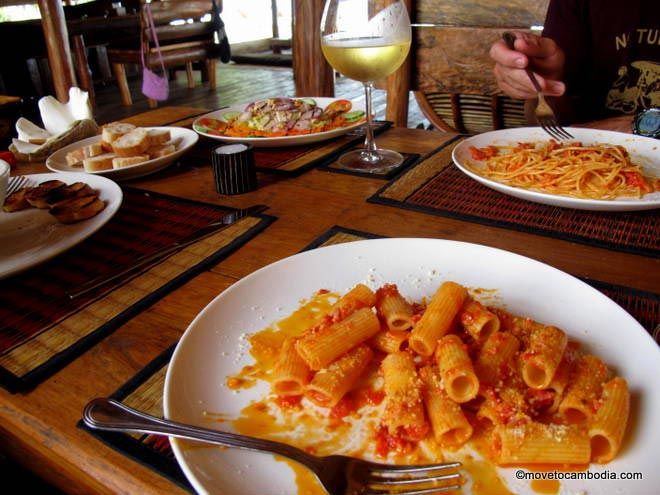 Before coming to Cambodia, Falchini worked as a caterer in Italy and Polci learned to cook from his grandmother. At Pura Vida, the couple dishes up Roman pasta specialities such as amatriciana and carbonara made with ingredients that you wouldn’t expect to find on an island, including imported pasta, extra-virgin Italian olive oil and Parmigiano-Reggiano cheese. For dessert they offer Italian coffee and a lovely mango cake that they can only make in the evenings, when they have four short hours of electricity for their oven. At around $7 their pasta dishes are more expensive than what you might find at the backpacker joints, but the food is delicious and astoundingly authentic. “We cook like home,” Falchini explains. “If you come to my home in Rome, we will cook the same.”

On Koh Rong’s Southwestern pier, mother-and-son team Laura Bellinazzi and Matteo Grignani recently opened La Mami restaurant and guesthouse, where they serve up Italian food, including an excellent $3 tomato bruschetta and an array of pasta dishes, from pesto to panna prosciutto piselli, for between $4 and $5.50. Perched on the jetty with the waves gently lapping below, it’s the perfect spot for an evening sundowner, whether a glass of wine or Campari and soda. 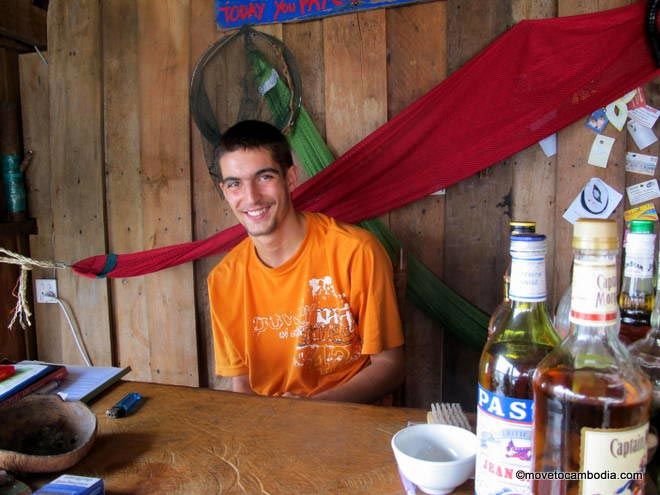 Matteo Grignani, one of the (Italian) brains behind La Mami on Koh Rong.

Originally from Milan, 20-year-old Grignani has competed in cooking competitions in Hungary, where the family has been running an agritourism guesthouse for many years. There, in addition to making their own all-natural prosciutto, salami, vinegars and spirits, they offer Italian cooking classes. And while they’ve decided to make the move from Hungary to Cambodia, they also serve a few Hungarian dishes — including several varieties of goulash — at La Mami as well. 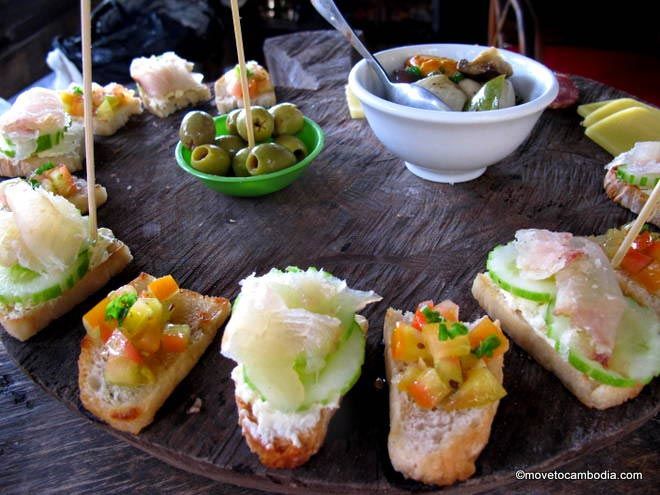 A light snack at Ten103 Treehouse Bay on Koh ta Kiev, all homemade and all delicious.

Closer to shore on Koh ta Kiev, Ten103 Treehouse Bay offers some of the tastiest island food in Cambodia. The place is run by American chef Joel Fry, who spent five years cooking in Italy, including at a Michelin-starred restaurant. Fluent in Italian, Fry makes pasta from scratch and bakes his own bread, pastries, and pizzas in a wood-fired oven in the middle of the jungle, all without the benefit of electricity or running water.And though it might seem absurd that this gourmet cuisine is being prepared on the middle of a small, primitive island controlled by the Cambodian military, Fry has managed to make it work, serving up some of the most interesting, and delicious, dishes in the country.

Each evening he offers a daily special — when I visited it was hand-made tagliatelle pasta in a puttanesca white fish sauce with tomatoes, white wine, olives and capers, served with salad and fresh bread for $8. “People stay longer than they intend and I think it’s because of the food,” Fry said. They’ve been travelling for a long time, eating rice, and they want a taste of home.”