Koh Trong: A Mekong island showcasing rural Cambodia at its most lovely

Posted on December 28, 2020 by Pete Ford
Get a quote for expat health insurance

Koh Trong. It really is bloody lovely, go and visit. The article really could end here, if you, dear reader, would just trust me. But if convincing is what you need, then picture an island in the middle of the Mekong, opposite the sleepy eponymous capital of Kratie province. The island is just 8 kilometers from top to toe, with bountiful pomelo trees filling neatly-tended front gardens, the uninhabited center a checkerboard of rice fields, and trees and bamboo in every other spot, the island is gloriously green. Welcome to Koh Trong. 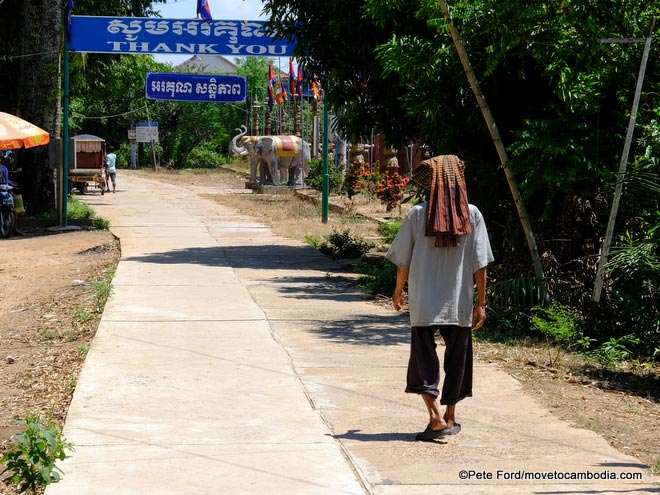 Koh Trong is about 5 hours north east of Phnom Penh. A five-minute, 1,000 riel ferry ride from Kratie’s crumbling riverside promenade, and one is transported to a bucolic Cambodia long gone from Phnom Penh; transport is only by bicycle, motorbike, or ox-drawn cart, traditional wooden houses line the 2-meter wide concrete road that rings the island, the Wat is still the tallest building around (no glass-fronted concrete towers yet), there are no chain coffee shops, and bedtime is promptly before 9 p.m., celebratory karaoke notwithstanding.

And that’s really the charm of the place; a few days walking the island, enjoying nature and birdsong, and avoiding the bustle and chaos of the mainland. And of course getting to know some of the details of the island’s inhabitants. Visitors can even add to the arboreal splendor by planting hardwood saplings in the grounds of the northern pagoda for $8 a tree. Whether via the homestay/guesthouse staff, or simply by exploring, for such a small island, Koh Trong is a fascinating microcosm of Cambodian life. 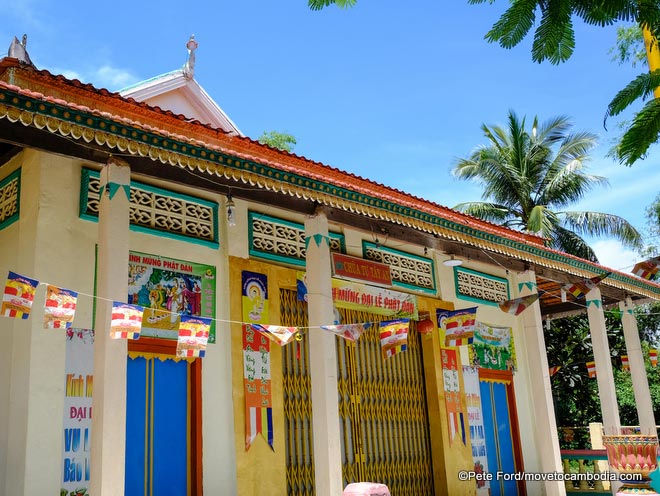 At the far south of the island for example, is a Vietnamese Buddhist temple from 1966. With graves containing the remains of ethnic Vietnamese born in Cambodia as early as 1930, it’s a spotlight on a community that has been brutalized by waves of anti-Vietnamese action, culminating in the genocide of the Khmer Rouge period between 1975-1979. While Vietnamese-Cambodians continue to face harassment and discrimination across the country (most are de facto stateless, as neither Cambodia nor Vietnam will recognize them) the community on Koh Trong appears both settled and thriving. Vietnamese is openly spoken in the stilted wooden houses and floating homes, and the rich farmland grows not just the usual rice, but also Vietnamese mint and small fiery chilis.

Elsewhere, the island’s Chinese-Cambodian heritage is displayed by the distinct grave mounds that rise from the fields. Where normally the graves would be adorned in Chinese characters and decoration, those on Koh Trong are all in Khmer script, pointing to a less-frictioned melding of the both cultures and assimilation — the widespread following of Chinese New Year had to come from somewhere! 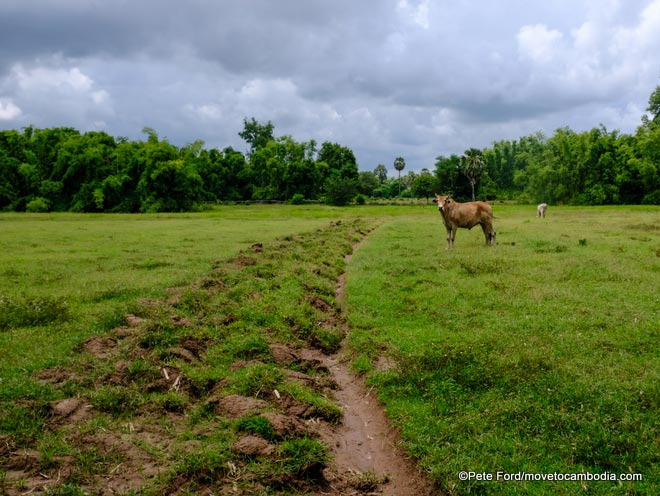 But if ethnography isn’t your thing, then there are sand banks, giant spirit trees, and secluded swimming spots to enjoy the other aspects of the island. Depending on the season, the sand banks can be expansive — they feel like coastal beaches not something riverine — yet an army of sand dredging boats are doing their best to hoover it all up to meet construction and land-reclamation demands elsewhere.

And of course, Kratie itself is worth exploring. French colonial buildings, including the fine governor’s house, line the riverfront, while old pagodas and plenty of wooden houses offer a glimpse of an older Cambodia. And who can come and not see the WWF-protected Irrawaddy dolphins in nearby Kampi (a tuk tuk ride away). These critically endangered animals are easily spotted on the $9-per-person boat rides, and while there is no great acrobatics on display, its calming to spend an hour watching them swim and play in their natural habitat. 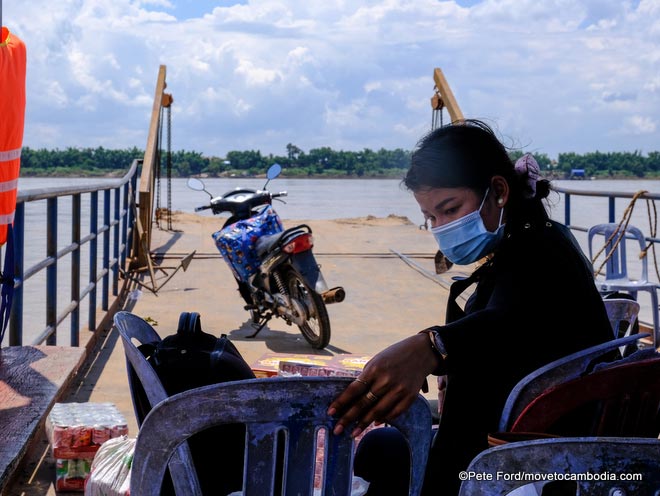 The ferry that plies the Koh Trong-Kratie route.

Transport: From Phnom Penh, shared taxis, minivans or big busses all ply the route (often on the way to Steung Treng or Ratanakiri further north). It takes about 5 hours to Kratie, and passes Cham villages, rubber plantations, and miles upon miles of rice fields, adding to the green overload.

From the Kratie boat dock, you can catch a five-minute ferry to Koh Trong for 1,000 riel. Boats leave regularly.

Accommodation: The local CBET can arrange homestays in local houses for as little as $4 per night plus an extra $4 for food, and at the opposite end of the spectrum is the Rajabori Villa, a sister accommodation to Ratanakiri’s posh Terres Rouge. In the middle sits Arun Guesthouse, neither homestay (but the friendly family is always around) nor polished, but with a killer red curry (that can be made vegetarian) and a lush garden.

One Response to Koh Trong: A Mekong island showcasing rural Cambodia at its most lovely