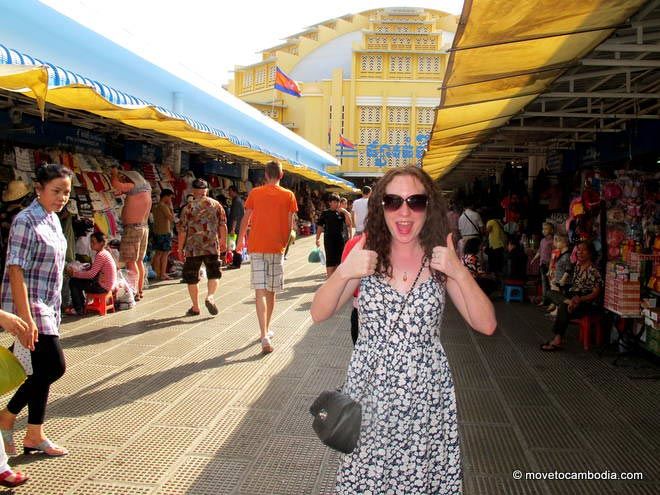 This happy traveler says “wear your purse across your chest and don’t carry valuables!”

The most common types of robberies in Cambodia are pickpocketings (particularly in local markets), snatch-and-grab robberies, and muggings. In crowded local markets and particularly during festivals, men should carry their wallets in their front pockets and women should be aware of their bags at all times. It’s suggested that women always wear their purses across the chest in order to make them more difficult to grab.

The most common type of robbery is a snatch-and-grab attack, where a man on a moto (either driver or passenger) grabs a phone, purse, bag, or camera out of your hands as he drives past. Foreigners in tuk tuks, on motos, and on foot have been targeted. When you’re out and about, be very careful about using your phone, especially if it’s an expensive model. Make sure you’re paying attention to your surroundings and keep a firm grip on your possessions. When in a tuk tuk, hold your bag firmly to your chest or, even better, sit on it or keep it under your feet.

Be realistic and don’t carry things you really can’t afford to lose. If you can help it, try not to commute with your laptop. Don’t play with an iPad in the back of a tuk tuk. When you are taking photos, try and stay a few feet back from the road and keep the strap around your wrist. If you need to carry your passport, make a copy and carry that instead.

During “robbery season“–the few weeks before both Khmer New Year and Water Festival–it’s best for women not to carry a purse or walk around late at night. Purses draw thieves like flies to honey, and it’s safer not to carry one. It’s also safer to take a car taxi after dark, particularly during those weeks. In general, walking around late at night is not a great idea for women, who tend to be especially targeted for robberies.

The easiest way to prevent these kind of robberies is to be aware. If you notice a moto driving in your tuk tuk’s blind spot, look directly at them. Thieves prey on inattentive expats, so staying alert can spare you becoming the victim of this type of crime.

The other common type of robbery is mugging. Unlike bag snatchings, mugging involves face-to-face contact with the perpetrators, most of whom are young men, often–surprisingly–from relatively wealthy families. Women are most often targets of these attacks, which are usually perpetrated by groups of young men, although men and couples have also been victims. This type of robbery is much more confrontational, and resisting is generally a bad idea. Violence can escalate unreasonably quickly–two Western women have been shot in Phnom Penh trying to hold on to their purses.

If you are the victim of a crime, check out our Emergency numbers and dealing with the police section.