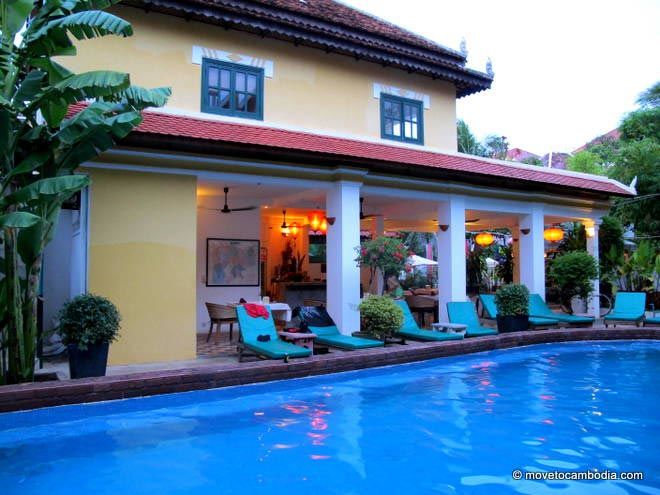 Siem Reap expats have many options at their disposal if they want to relax poolside.

The other major choice for expats is Siem Reap. Siem Reap means “Siam defeated” and harkens back to a victory over what is now Thailand in the 16th century. The city is a major tourist destination due to its proximity to the temples of Angkor, and as a result it has lots in the way of infrastructure, modern hotels, and restaurants. That also means higher prices at Western restaurants and for transportation–that is, until you learn to bargain in Khmer.

Siem Reap is warmer than Phnom Penh and has a longer wet season. The countryside around the town is gorgeous, filled with rice paddies and ancient temples. The Western expat scene, although not huge, is vibrant, with many artists and photographers making their home here. Thanks to a large population of Korean and Japanese expats, Siem Reap has many Korean and Japanese restaurants.

Although the city is sleepier than Phnom Penh, expats who live in Siem Reap swear that the loveliness of the town, and the fact that the locals speak more English because of the tourism industry, more than make up for the lack of nightlife. And there are a glut of backpacker bars if you’re desperate!

Siem Reap has a thriving culinary scene, and some of the best restaurants in Cambodia are located here. You can find foreign food of all different stripes and even a handful of cooking schools. There’s also a lot going on in Siem Reap’s arts community, involving both local and foreign expat artists, and a number of up-and-coming galleries.

Why did you decide to live in Siem Reap?

Amazing people, great weather, vast range of food, cheap everything, business opportunities, Angkor Wat on my doorstep, and my girlfriend, who is Cambodian.

What is the best thing about living in Siem Reap?

The relaxed way of life and the beautiful people, who inspire me daily.

What is the worst thing about living in Siem Reap?

The corruption in every place you look–the rich getting absurdly richer and the poor getting obscenely poorer.