Posted on March 18, 2014 by Lina Goldberg
Get a quote for expat health insurance

If you’re looking to learn Khmer, one of the most well regarded courses is at Royal University of Phnom Penh’s Institute of Foreign Languages. The course, ‘Khmer for Foreigners’ teaches reading, writing, and speaking. Most teachers and Cambodian learning classes focus only on speaking, and most expats never learn to read or write the language. The successful completion of Khmer for Foreigners, on the other hand, will have you reading, writing and speaking the language at a high level after a year. 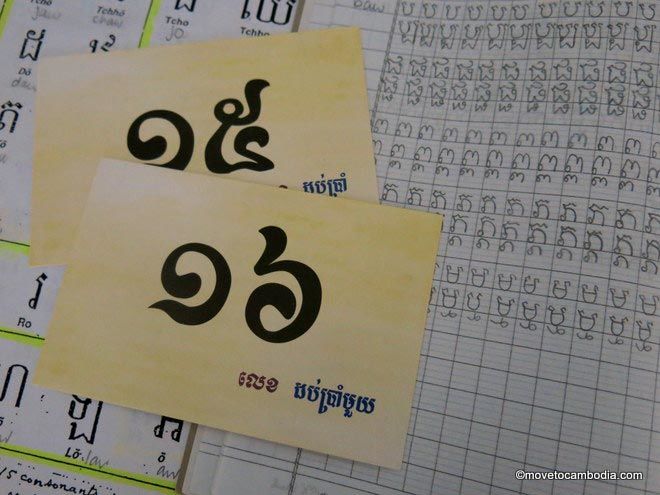 Learning the alphabet in Khmer for Foreigners.

The course is five days a week, 90 minutes a day for eight to 10 weeks per term. There are four levels each running four times per year and it’s possible to do the entire course in a year. Khmer for Foreigners costs $800 for a year, or $200 per level. Those who’ve successfully completed the course say that learning to read Khmer script is integral to learning to speak the language, as understanding how each character is pronounced results in overall better pronunciation, thus making it possible to make oneself understood.

While it’s generally thought to be the best Khmer language learning program around, I had mixed feelings about it. The class taught me an awful lot about the Cambodian educational system, far more, in fact, than I learned about the Khmer language in a month of class. The material, which uses a book called We Learn Khmer, is taught entirely by rote. The teacher was an accomplished linguist with a degree in Cambodian literature, but our classes generally followed the same format: he would hand out a worksheet with a list of Khmer characters on it. He would read it aloud once, then he would read it aloud a second time. This time, we would all repeat back what he said. Finally, he would go around the classroom asking each student to read the worksheet aloud one by one (and there were 18 of us). Most of us had written down the phonetics for the sound of each character and were just reading what we had written down, rather than actually recognizing the character. All of the actual learning I did was outside of the classroom, and the time in the classroom felt sort of pointless. Having a Khmer partner, friend, or colleague around that can correct your pronunciation when you are studying is invaluable as pronunciation is key.

That said, I have met others who had a very different experience in the Khmer for Foreigners classroom (and had a different teacher). The beginning weeks are difficult, they say, but once you learn to recognize the characters —no small feat because the language has one of the largest alphabets in the world — the class becomes more rewarding.

Even after a month I was able to recognize some of the alphabet and try and sound out words on business fronts (all businesses need to have Khmer signage, and many Western businesses just spell out their business name phonetically in Khmer, making for good reading practice.) Those who manage to stick it out actually learn to read, write and eventually speak Khmer, unlike the great majority of expats in Cambodia. As we wrote last week, there are a lot of good reasons to learn Khmer, even if it’s not strictly necessary to live as an expat in Cambodia.

For me, the last straw was the time and location. Right around the school there is bumper to bumper traffic every day in the early evening, so getting from Toul Kork back into town took an hour by car or tuk tuk every day. The 90 minute class took approximately 3.5 hours door to door, plus at least an hour or two of studying every night, which was more of a commitment than I was ready for. I’ve been told that the morning classes have lighter traffic, or that taking a moto allows you to beat the crowds. Overall, this is still considered one of the best courses in town and at about $3 an hour, is also the best value.

22 Responses to Learning Khmer: Khmer for Foreigners at RUPP