Posted on January 7, 2021 by Susan Haythorpe
Get a quote for expat health insurance

Anyone who’s into running will agree this is the best time of year to get out there and pound the capital’s streets. The cooler mornings mean you don’t have to be out before dawn to avoid the heat. With the news that the Angkor Wat International Half Marathon, is happening, as a virtual run, there’s even more reason to get (back) in training. Here are some tips to help those new to running, or new to Phnom Penh, get into their stride. 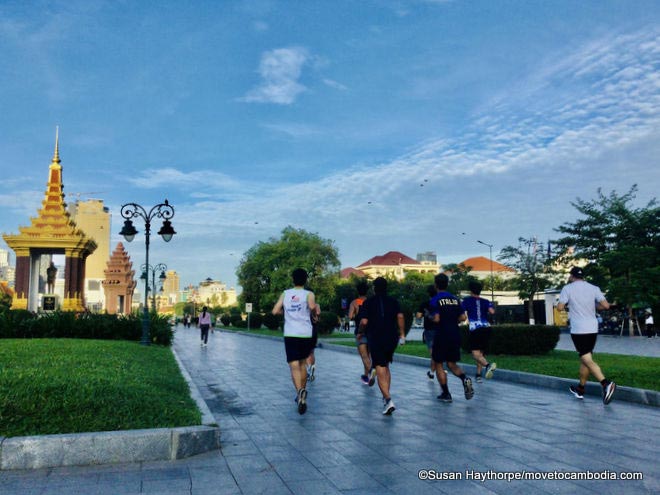 Enjoying a run around the statue of King Father Norodom Sihanouk.

The riverfront is a great location for any kind of exercise. From the night market to the end of the boardwalk on Koh Pich is a scenic 5k run, much of it on the very serviceable new walkway. The wide streets and low traffic on Koh Pich itself make the area a good choice for longer distance road running. A circuit of the island is about 4km depending on route. Another quieter option is the Chroy Changvar peninsula; take the shuttle ferry between the port on Sisowath Quay, near Nagaworld, and the Sokha Hotel if you want to avoid a run across the busy Japanese Bridge.

When it’s not in use by the national football team, you may find you’re allowed to use the running track at the Olympic Stadium (as with so many things in the Kingdom, one can never be sure). But if not, your journey there won’t have been wasted. The 1.4km road that circles the stadium, within the complex, is virtually traffic-free and, in a very flat city, the few short, steep ramps leading off it provide a rare opportunity to practice hill repeats. Phnom Penh parks are well-designed for circuit exercise — a lap of Neak Bahn Teuk, around the King Father statue, is 1km — and suited to short, interval or tempo runs, though can be congested when the customary early morning and late afternoon/early evening promenades are underway. 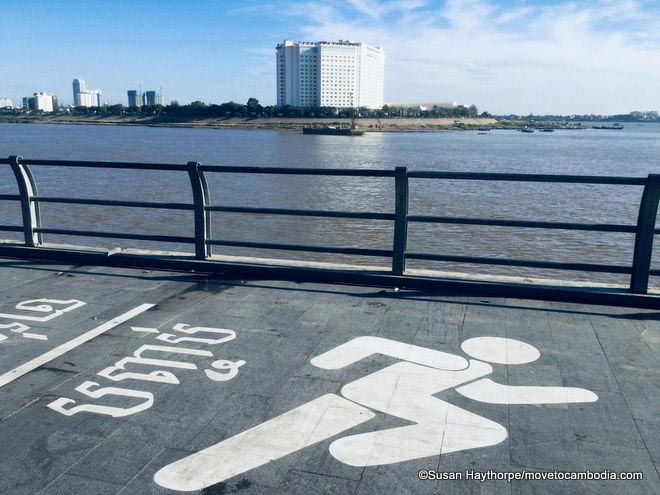 The riverfront walkway and Chroy Changvar peninsular, round the Sokha Hotel, are both recommended routes for runners in Phnom Penh.

Beyond the city center, the new Boeung Kak Road currently sees virtually no traffic and is particularly well-trodden by local runners who will even run marathons up and down its length. Another popular route in the Toul Kork vicinity is the leafy university campus on Russian Boulevard.

Strava, the online community of athletes is your good friend in Phnom Penh, as elsewhere in the world, for information on local routes, or segments; for comparing performance stats (and for showing off the exotic locations you’re running in!) Toul Tum Poung-based social running club the Running Bongs is active on Strava and welcomes new members, including beginners. Serious athletes should check out the Kim Kok running group, also on Strava, made up mainly of super-keen locals but with a few expat members too.

It’s worth underlining the need to dress for visibility when running Phnom Penh’s streets, whatever the time of day. It can be tempting to escape the erratic traffic and pervading obstacles to the open countryside of Koh Dach or Kandal province, both within easy reach. A word of warning, though, about the local dogs in rural parts; these guys are territorial and can be aggressive. 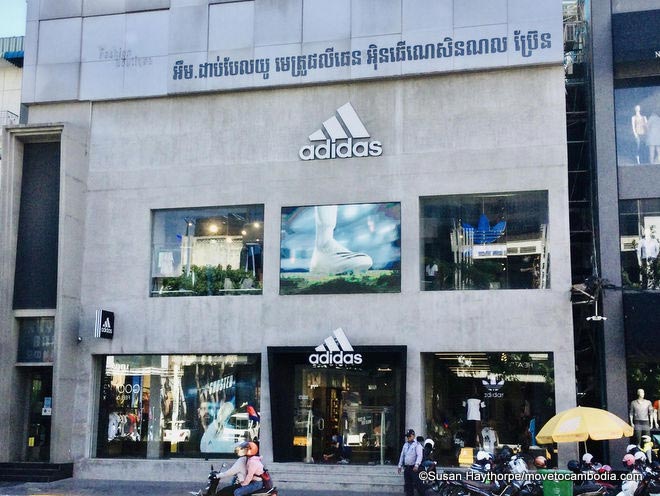 Whether you’re running for fun, fitness or fulfilment, it goes without saying you need the right footwear. Many people here run in Adidas shoes, if not full kit, largely because the brand has long been the most prominent in Phnom Penh. Aeon Malls are the best shopping destinations for major sports brands, with Adidas, Puma and two welcome new arrivals, Japanese sports retailer ASICS (challenging Adidas in popularity) and Decathlon. The latter’s wide range of affordable sportswear and equipment is something of a game-changer for the city’s sports lovers. The Sen Sok City mall has by far the larger Decathlon unit, but the retailer operates a very efficient online order service with home delivery or collection from either branch. There’s also a Reebok shop on Sihanouk Boulevard near Adidas’s flagship store.

Not so long ago it was hard to find a decent running watch in Cambodia. Garmin has since cornered the market, partly thanks to the surge of interest in cycling, and Flying Bikes on Street 51 has a respectable range to choose from. The store is also your go-to for energy gels, which have yet to really take off in the Kingdom (but have allegedly been sighted at some branches of U-Care Pharmacy too). 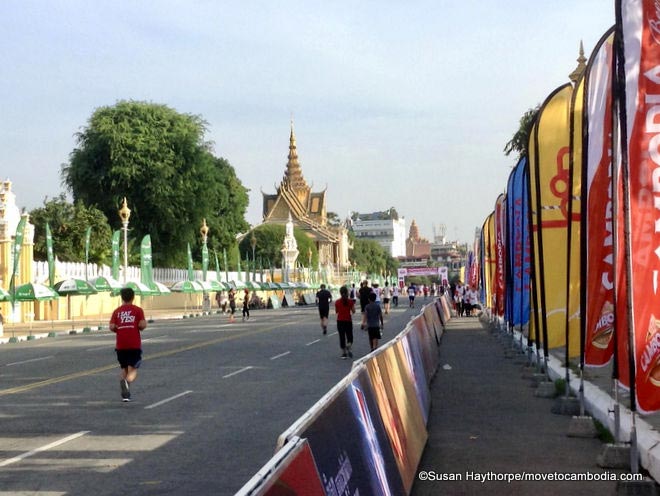 Warming up for the Phnom Penh Half Marathon.

The Kingdom’s usually-vibrant race program unsurprisingly fell apart last year, but there’s no reason to think it won’t be back to normal in 2021. Apart from the rescheduled Angkor Half Marathon — an early morning circuit of the magnificent temples has to be one of the finest runs in the world — the national park also hosts a full marathon in August. Phnom Penh has its own half marathon towards the end of June. The Sihanoukville half marathon, usually held in March, is currently suspended. All of these events feature 10km and 3km fun run (some may have 5km too) categories that are open to all the family. The annual program also includes October’s Bokor Mountain half marathon and cycle race and the challenging Angkor Ultra Trail, next scheduled for January 2022.

3 Responses to Running in Phnom Penh