Snaps: A visit to a Cham Muslim village

Posted on April 5, 2013 by Lina Goldberg
Get a quote for expat health insurance 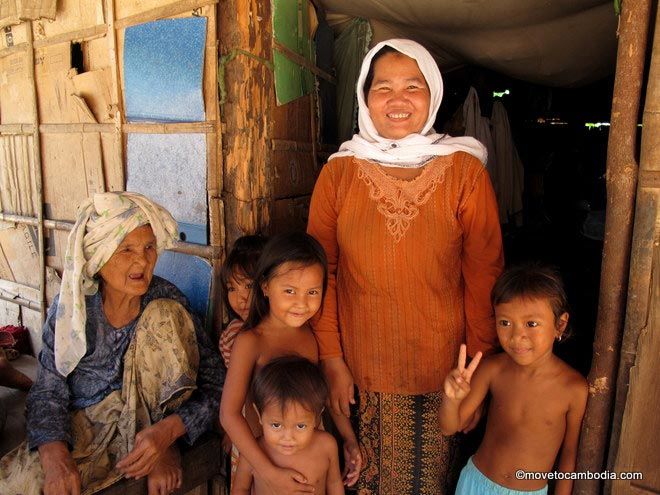 Along National Road #6 in Kandal province there are a number of Cham Muslim communities. The Cham people have lived in Cambodia since 1456 and have a friendly relationship with the rest of the population. During the Khmer Rouge period, however, the Chams were targeted for death and most of the country’s mosques were destroyed. Since then, most of the Cham community live a hand-to-mouth existence in Kandal and Kampong Cham.

I met this family in September, 2010. The mother collects recyclables for a living, and their house was little more than a shack with a bamboo frame and walls made of previously-discarded cardboard. It was during Ramadan, and the temperature was over 90°F, but the extreme humidity made it feel much higher.

As per the rules of Ramadan, the adults were fasting from dawn until sunset. This includes drinking water, which must have been torturous. Despite this, the matriarch of this family was in great spirits, playfully teasing me and laughing at my attempts to communicate in Khmer. She complimented my large, Western nose and told me repeatedly how fat and beautiful I was. She offered me cold tea and small cakes made with duck eggs that she had prepared for iftar, the breaking of the Ramadan fast after sunset.

The children were delighted once the camera came out and I ended up with half a dozen shots of them mugging for photographs.

3 Responses to Snaps: A visit to a Cham Muslim village