The cheapest ATMs in Phnom Penh

Posted on May 27, 2017 by Jen Green
Get a quote for expat health insurance

Not everyone decides to open a local bank account when they move to Cambodia. Should you? We help you break down the cost of taking money out of ATMs, so you can decide for yourself.

Which one will you choose?

Luckily, there are plenty of ATMs to choose from in Phnom Penh, so you can access your foreign bank accounts and buy all of the cheap beers you can drink.

ATM fees have, unfortunately, been going up and up in the past few years. Canadia Bank ATMs used to be free, now it charges $5 per withdrawal. Mekong Bank also used to have no fees and now has joined the $5 per transaction crowd.  Unfortunately it sounds like Maybank no longer offers free ATM withdrawals, either.

The rest of us will generally have to pay fees of $4 to 6 per transaction. At the time of writing, of the banks that charge fees, ABA, ACLEDA, and Vattanak have the lowest, at $4, at Cathay United has the highest, at $6. (Additionally, Cathay United’s notification appears to be an advertisement and does not require consent, much to the chagrin of many unsuspecting cardholders.)

These fees add up — withdrawing just four times per month (which, if you have a typical daily withdrawal maximum of $500, means you have a fairly average $2000/month Phnom Penh lifestyle) and you’ll pay $240 per year in fees (plus any fees your own bank can add!).

Are you one of the unfortunate souls with a MasterCard Debit/ATM card in Phnom Penh? There are a few Visa-only ATMs in Phnom Penh, but it’s not that bad. ABA, ACLEDA, ANZ, Canadia, and Mekong all take both Visa and MasterCard and are the most ubiquitous. 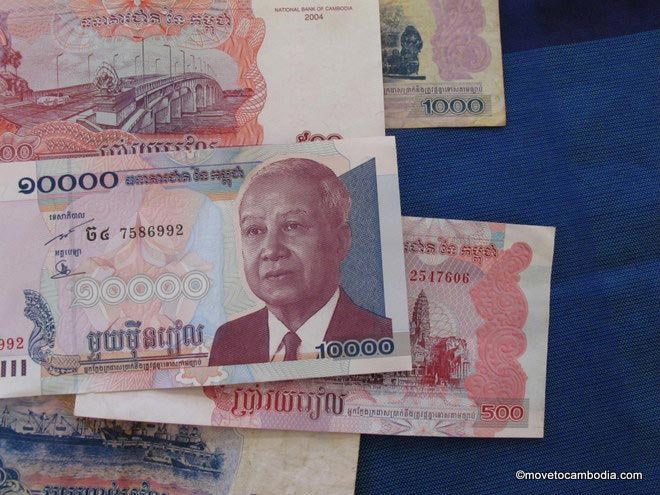 Keeping it riel: there are a few ATMs that dispense Cambodian riel.

Most ATMs dispense US Dollars if you use a foreign card. This is really helpful if you are staying in Phnom Penh and Siem Reap (and the main parts of Battambang, Kampot, and Kep) where most prices are in USD, but not so much if you are headed to any of the other provinces and lovely towns villages outside of these urban centers. If you prefer to take out riel rather than go to a money changer, ABA Bank and Mekong Bank ATMs dispense riel.

(If you use a card from a local bank, you can always withdraw riel.)

Warning: most Phnom Penh ATMs spit out the largest bills possible, and it can be hard to get change (unless you want to be the one in charge of making sure everyone pays their share of food and drink at your next big group dinner). We recommend withdrawing an amount in USD that is not a multiple of $50– taking out $380, for example, will give you four $20s and three $100s rather than the four awkward $100 notes you would generally be saddled with if you withdrew $400.

(NB: Our favorite places to break $100 bills are: Lucky Supermarket, Brown Coffee, and Supercheap. I’m pretty sure they all know this, but they never give us a hard time.)

There are new banks popping up all the time, let us know in the comments if you discover any no-fee ATMs in Phnom Penh.

110 Responses to The cheapest ATMs in Phnom Penh