Posted on January 18, 2013 by Lina Goldberg
Get a quote for expat health insurance

It may only be a six-hour bus trip from Cambodia’s capital, but to many Phnom Penh expats Siem Reap might as well be a thousand miles away. Siem Reap has a drinking culture that’s well worth a visit, however. The nightlife options there are certainly fewer and more geographically concentrated than in Phnom Penh–most of the town’s watering holes are centered around the Old Market. But luckily the Siem Reap expats are a friendly crew, not afraid to go boozing on weeknights or show a lonely visitor the ropes. Here are a few of my new favorite spots. 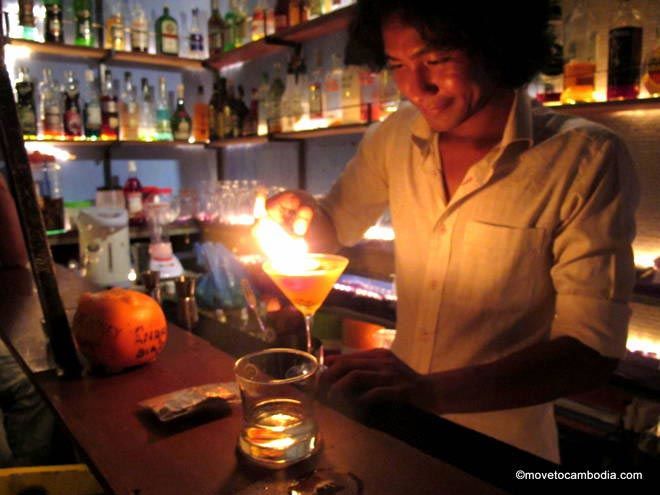 Start off an evening on the roof terrace of the Soup Dragon, where you can take in the sun setting over the Old Market area while quaffing two-for-one happy hour cocktails. The marginally higher temperatures in Siem Reap practically beg for frozen margaritas.

Next, venture over to Miss Wong, a cocktail bar inspired by old-time Shanghai that makes Phnom Penh expats whimper with jealousy. From a lemongrass collins to a bloody mary made with Kampot pepper-infused vodka, the cocktails at Miss Wong are truly excellent, making the most of Asian flavors and the ridiculously low prices for high-quality booze in the Kingdom. They’re also now serving a small menu of light dishes and comfort food, in addition to the tasty dim sum that’s been on the menu for some time.

For those on a budget, Viva! is always a good bet, offering $1.50 margaritas, frozen or on the rocks. Surprisingly, even the flavoured options — pineapple, mango and strawberry — are pretty tasty. After Viva!, head across the street to Laundry, a dimly lit expat favorite that is open late. For diversion they have a pool table and darts, and they stock South African cider in addition to all the usual beers and spirits. Next door, Warehouse regularly has live music and a mixed crowd of tourists and expats.

Nearby, Station Wine Bar offer 20 types of wine by the glass from around the world and stages drag shows three times a week, featuring the creative side of katoey. Across from the John McDermott Gallery you’ll find gay hangout Linga Bar. Linga isn’t usually busy until later in the evening, but it’s a good place to watch the local color–in the form of Cambodian moneyboys–while enjoying a well-prepared cocktail. 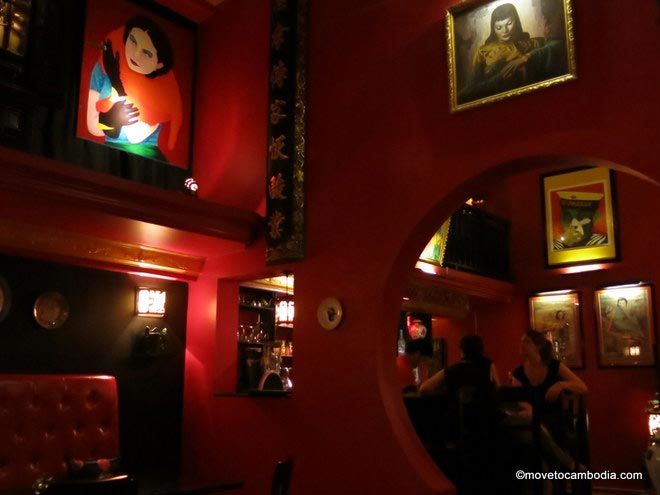 Get a taste of old Shanghai (and perfect cocktails) at Miss Wong in Siem Reap.

Good for warm-up or come-down drinks (they’re open until sunrise) is a newcomer to the Siem Reap scene, Tuk Tuk Bar. With drinks served out of a parked Thai tuk tuk, this small, chilled-out bar offers some of the most creative cocktail combinations in town at rock-bottom prices. Owner and chief mixologist Mao Hong Kry may be known to more than a few Phnom Penh expats; he comes from a stint at Nagaworld’s Darlin’ Darlin bar, where he spent his time creating outlandish cocktails and juggling bottles while deftly lighting drinks on fire. His antics at Tuk Tuk Bar are no less impressive. Don’t be afraid to test his mettle by asking for a custom cocktail based on your most outlandish personal preferences.

Once you’re sufficiently intoxicated, it’s worth taking advantage of Siem Reap’s more serious nightlife and boozing opportunities. Angkor What? boasts that they’ve been “promoting irresponsible drinking since 1998,” and while their drinks aren’t necessarily the most gourmet in town, they do offer a free T-shirt if you buy two buckets in one order. In a spirit of investigative journalism, I partook of the Long Island iced tea bucket and found it surprisingly drinkable.

Directly across the street is Temple Club, who are giving Angkor What? a run for their money in the drunken-backpacker-dancing-on-raised-platforms category. In many ways Temple Club is superior, but only if you’re only interested in dancing or people-watching, because their inattentive and mixology-challenged bartenders leave much to be desired. The lack of a noticeable sex-worker presence in the club, though, makes it a refreshing change from the Phnom Penh bar scene.

If a night of dancing runs late, the final option is X Bar, which picks up the crowds once Temple and Angkor What? close down. Rave music and didgeridoos notwithstanding, it’s an inexpensive spot for a final nightcap before heading home to a bucket-induced morning headache.