Posted on July 2, 2014 by Lina Goldberg
Get a quote for expat health insurance

If you’ve been to Siem Reap’s Pub Street, undoubtedly you’ve been approached by a bedraggled young mother or child holding an empty baby bottle and toting a sleepy-looking infant. “The baby is hungry,” they plead. “I’m not asking for money, just formula for my baby.” Got scammed? Don’t fall for the powdered milk scam in Cambodia.

Every night, well-intentioned tourists fall for this scam, thinking that the $30 canister of formula they are buying is going to feed that drowsy baby, allowing both she and her caretaker to head home. Unfortunately, that’s not really what’s going on. All of the formula that’s purchased is promptly returned, with the proceeds being split with the store (Huy Meng Minimart under X Bar on Sivatha Blvd at the bottom of Pub Street is a favorite).

Now you may be reading this and wondering what’s the big deal? This desperately poor family is getting some much-needed income, so why does it matter if they trade the formula for cash?

The truth is much darker. Local expats speculate that the baby-beggars are run by a mafia of sorts. If you get a cup of coffee on Pub Street in the early evening before sunset, you’ll see seven or eight young women descend on the street at the exact same time, each of them carrying a bleary-eyed baby slung to her hip, many of them blowing cigarette smoke in their faces. Women don’t always carry the same baby, indicating that the babies are merely rented or borrowed for the night. Many of the babies are carried by older children and the babies are uncharacteristically docile. 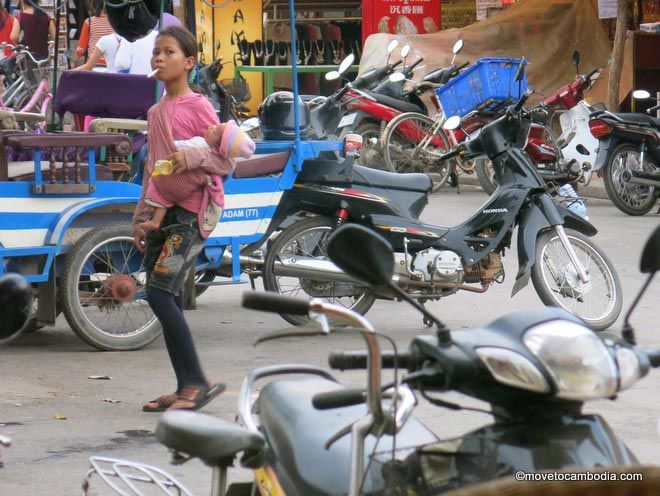 Local child protection organizations say that they haven’t seen evidence that the babies are drugged, but it seems entirely possible in order to assure their pliability and make them seem more pathetic and sympathetic. Personally, there’s only one baby I’ve seen on Pub Street that seems alert, the rest are scarily mellow, especially when one considers the fact that they are there for up to 12 hours at a time.

Expats who have tried to warn tourists that are falling for the scam have been threatened with violence. When a young girl carrying a baby asked me to buy her milk recently and I declined, she scratched and pinched my arm. It’s not hard to imagine the desperation these young women must feel–after all, they likely need to pay for the baby they are renting and if the mafia theory is correct, their handlers may be watching to make sure they bring in enough money each night.

For tourists, handing over $20 or $30 to buy a can of formula is a quick, feel-good experience. Just a few days ago I saw a tourist taking photos of himself posing with a canister of formula and the bedraggled street kid he was buying it for. He probably went straight back to his hotel to post about the experience on Facebook, and no doubt received an appreciative response from his friends, who were just as clueless about the reality of the situation as he. 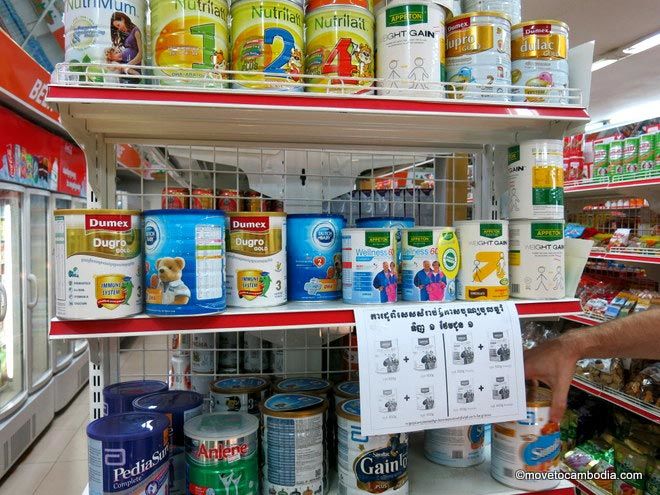 This baby formula has probably already been bought and returned several times today.

But there are more reasons than just losing their money that tourists shouldn’t be participating in this scam. For one, think of the babies. These babies are likely being drugged, kept up all night and even being deprived of food to make them look more desperate. Toddlers that are swaddled for hours upon hours long after the age of infanthood do not learn to walk properly. And tourists are the ones supplying the demand for these abused babies. If no one was willing to reward these scammers, they would have no motivation to keep these babies on the street.

“The scam is a albeit slightly more lucrative version of begging,” James Sutherland of Friends International, explains. “Poor mothers and vulnerable infants are always at risk on the streets, and scams like these keep them there, day in, day out.”

Children are also used in this scam, often toting the babies themselves. Because they have more value as beggars or scammers, they are kept on the streets all night, instead of sleeping and going to school in the mornings. When poor families have financial incentive to keep their children out of school–especially when there are addiction or gambling problems in the home–many choose to keep their children on the street. 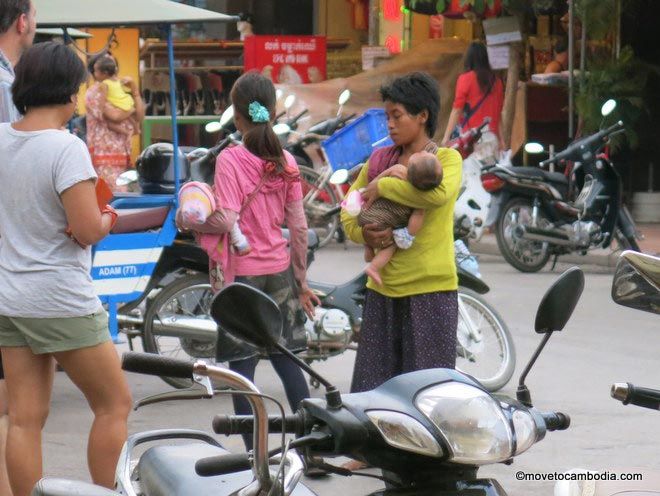 Just say no to sleepy babies in Siem Reap.

Recently in Thailand a gang of children selling roses on a busy nightlife street were discovered to be trafficked, sold or rented by their families and then never heard from again. It’s hard not to think that if tourists just said “no,” this market in child beggars would not be so prolific.

Buying formula does not help these babies, it does quite the opposite. Buying powdered milk (or, indeed, buying anything from children on the street) only gives their parents reason to keep those children on the street. In this case, where it appears that a much more sinister situation exists than families merely begging for money, you must understand that by participating in any way, you are contributing to the abuse of these children.

“We believe that well-meaning people should not perpetuate that cycle, but should rather direct their attention to getting families like these off the streets and out of poverty and that can be done by supporting organizations working to do that, with education, training and income generation programs,” James Sutherland of Friends International, a local child-protection organization, told us.

What should you do if asked to buy formula for a baby?

Just say NO. Tell your travel companions and guesthouse about the scam. The more people that know about it, the less prevalent it will become. Familiarize yourself with Friends International’s ChildSafe Traveler Tips, who suggest that you not give to child beggars, buy postcards or items from children selling on the street or visit orphanages in Cambodia.