Posted on August 16, 2013 by Lina Goldberg
Get a quote for expat health insurance

The Golden Banana hotels in the Wat Damnak area are some of the area’s best accommodation options. They’re also some of the most confusing, with four distinct properties under the same name. We’re here to review all of them, from least expensive to luxurious. 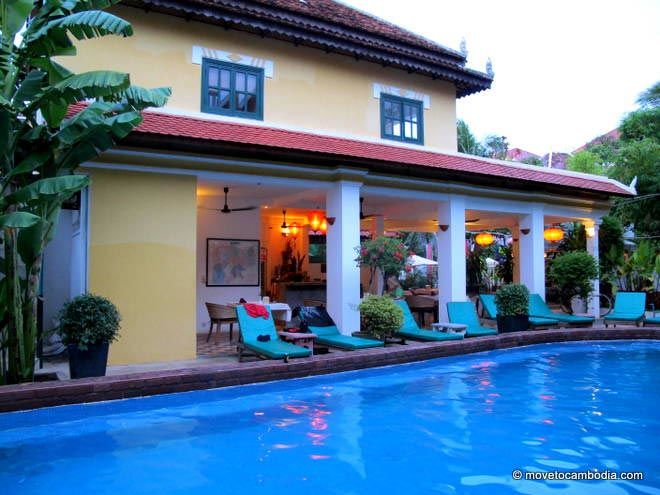 The hotels share a few features in common. All of the hotels have friendly staff with excellent English, and they have tuk tuk drivers that offer the standard temple tours for around $20, depending on which temples you want to see. If you’re planning a Siem Reap trip to see the temples, it’s nice to be able to hire a tuk tuk directly from your hotel and have them bring you back at lunchtime for a dip in the pool before heading back out for more temples. Visiting temples is hot, sweaty work, so I would recommend trying to fit as many dips in the pool as possible throughout the day–it’s a can’t-fail strategy. 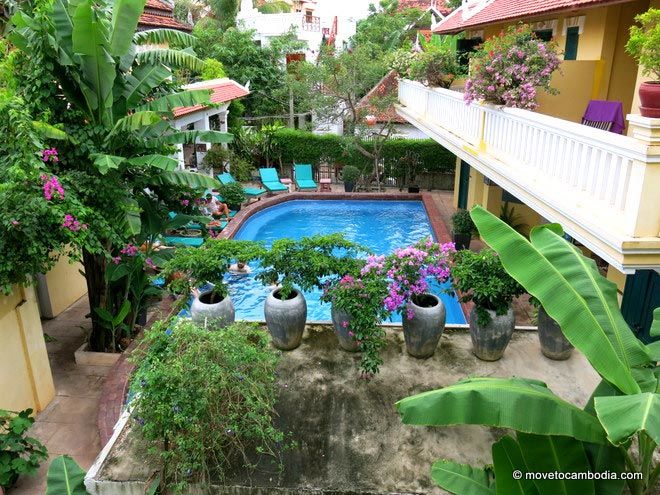 The view of the pool from a Golden Banana Superior Hotel room balcony.

The Golden Banana is just next to Wat Damnak, and a five to seven minute walk to the Old Market and Pub Street. It’s also just a few minutes from my favorite restaurant in Cambodia, Cuisine Wat Damnak (don’t miss eating there at least once if you can). There are lots of lounging areas at the hotel, as well as pool loungers and shaded seating. The Golden Banana properties bill themselves as gay-friendly, but the crowd is mixed.

The Bed and Breakfast is the oldest of the properties, and if you book a standard room, you’ll end up at the Bed and Breakfast. Even though they share one listing on Agoda and one website, it’s two different places, and rooms listed as superior rooms are in the Superior Hotel. Confusing enough for ya? Here’s the breakdown.

The rooms at the Golden Banana Bed & Breakfast are the shabbiest of the bunch, but still represent great value because of the access to the pool. All rooms include air-conditioning, hot water and free WiFi, and they’re all equipped with televisions. They’re small and not particularly bright, but they’re clean, serviceable and come with a free breakfast next door. If you’re looking for a budget guesthouse with amenities, this is the way to go. 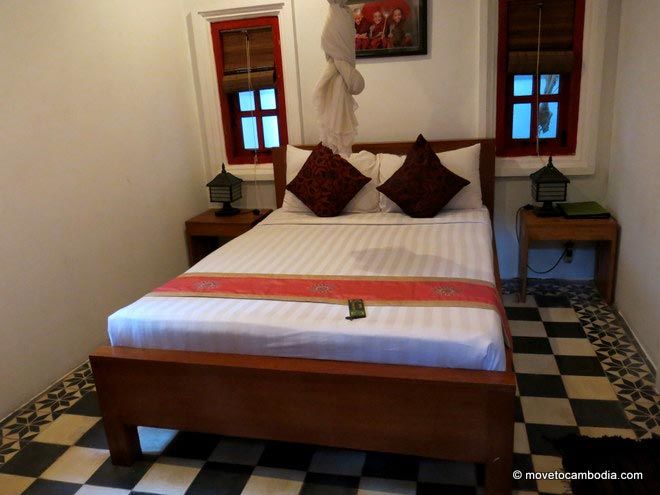 Golden Banana Bed & Breakfast rooms are small but perfectly formed. And did you see the pool?

Rooms cost $25 for a single, $28 for a double and $31 for a twin in high season and are $3 less in low season. However, you’ll often find lower prices on Agoda all year, with rooms starting at $20. If you’re looking on Agoda, rooms listed as standard rooms are at the Bed & Breakfast.

The Golden Banana Superior Hotel is great value for money, with large, lovely rooms that overlook the pool that’s shaded with banana trees. Upstair rooms have cute, tiled balconies for those that want to sun worship or perv on pool-goers. Rooms are light and airy, with air-conditioning and flat-screen TVs with cable. Bathrooms have hot water overhead showers with good water pressure–something that you won’t find everywhere in Siem Reap. Twins and triples have large beds and they’re willing to put another bed in for an extra $10. Rooms have a desk and mini-bar with relatively cheap Asian beer, and there’s also a bar downstairs. Personally, I think these rooms are great and it’s where I usually stick family and friends who are visiting (and sometimes I stay there myself!) 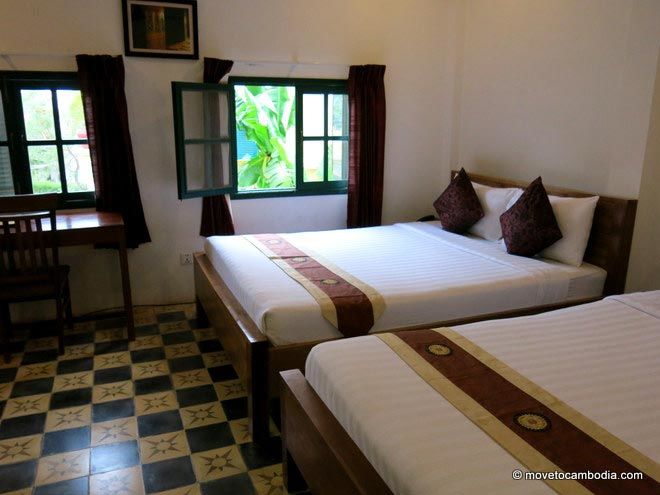 This photo doesn’t do the rooms in the Golden Banana Superior Hotel justice, they’re big and lovely.

In the high season, rooms cost $35 for a single, $45 for a double, $55 for a twin and $65 for a triple, and are $7-10 less in low season. Again, prices on Agoda are usually lower than booking direct and they often have special promotions. If you’re booking with Agoda, rooms listed as superior rooms are at the Superior Hotel.

We’ve got more reviews of hotels and guesthouses in Siem Reap.