Posted on September 29, 2019 by Lina Goldberg
Get a quote for expat health insurance

Over the last year several large international hotel chains have finally crept onto the outskirts of Siem Reap, but the first to make it to the town center is the new Ibis Styles. Located just a three-minute walk from Siem Reap’s Old Market, Ibis Styles is smack-dab in the center of the action. 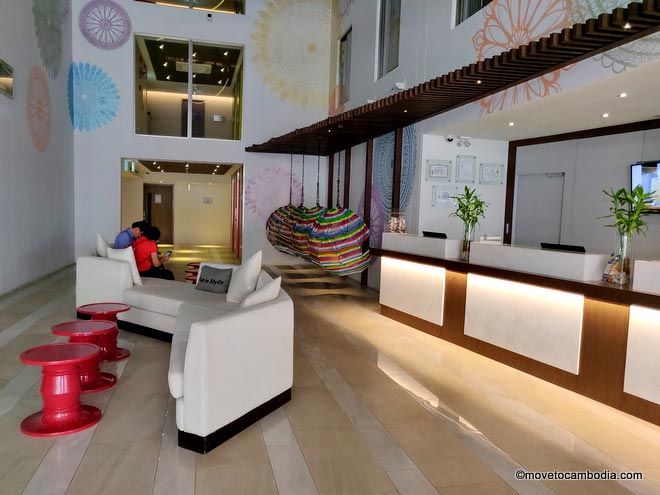 The pillows in the lobby proclaim “free hugs” at the Siem Reap Ibis Styles.

Part of the larger Accor hotel chain, the Ibis Styles aims to be affordable and hip, targeting a younger audience than its big sister the Sofitel. Despite being part of a major international chain, the Ibis Styles in Siem Reap managed to give a nod to their Cambodian local, in the form of brightly colored modern murals of Angkor Wat in the rooms, and wall installations in the shape of lotus leaves.

The rooms are bright, clean, and modern. They have been designed a bit more intuitively than the usual Cambodia hotel, with international plug sockets that are in convenient locations, such as next to the bed or on the counter next to the tea kettle. (It’s a little-discussed fact that in more than half of the hotels in the country, one must put the tea kettle on the floor in order to plug it in). The standard and superior rooms are the same size and shape, but the superior rooms have windows that face the outside, while the standard rooms have windows facing an interior courtyard, so not as bright. The price difference was around $10 at the time of writing, but probably worth it if you plan to spend a lot of time in your room, not so much if you are just using it as a base for your temple visits. 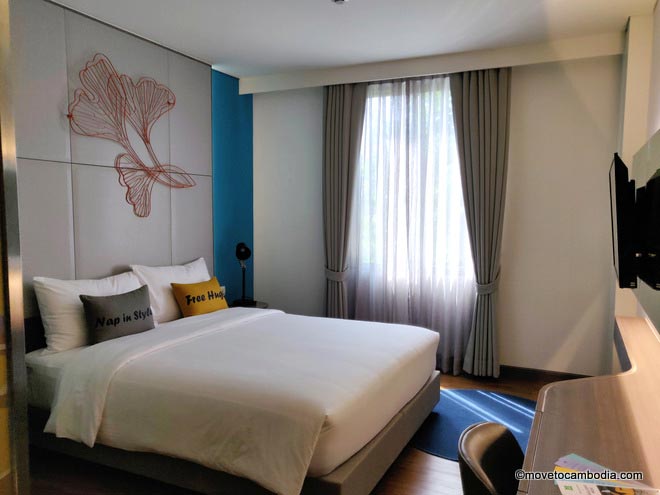 A “superior double” at Ibis Styles Siem Reap. Unlike the standard rooms, these have windows.

Our room came equipped with a flat screen TV with a selection of stations in several languages including English, and a USB port if you want to play your own shows. There was a tea kettle and coffee station, electronic safe, and guest-controlled thermostat with central air-conditioning—a nice touch when most hotels have a stand-alone AC unit that blows cold streams of air onto whoever is closest.

Like most of the affordable arms of the big chains, the decor is “quirky” and “fun.” To grumpy old expats such as ourselves, some of the aggressively enthusiastic decor went a bit too far, such as pillows strewn about the lobby and rooms that proclaimed, ‘FREE HUGS,’ but otherwise we appreciated the starkly white rooms with brightly colored accents. 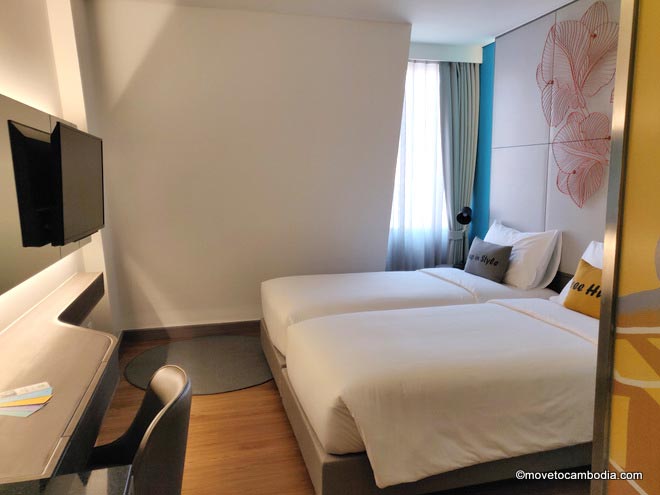 On the third floor is a small rooftop pool, with deck chairs for lounging. The pool overlooks town, which makes for some lovely poolside views of Siem Reap. Although there is not a bar on the third floor, one could imagine that a cocktail brought to the pool from the ground floor would not go amiss…. 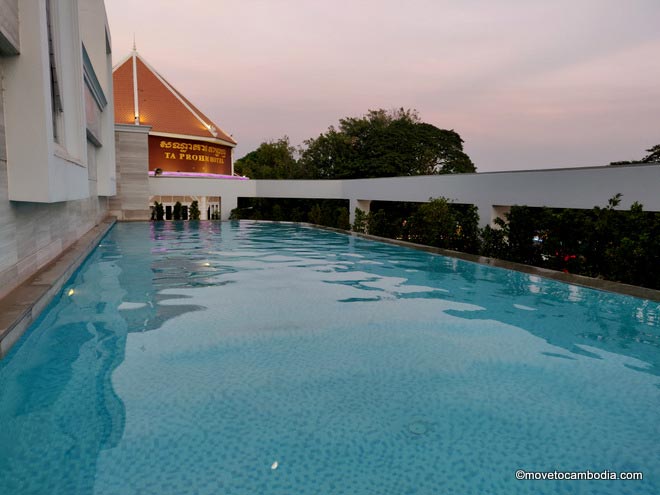 The rooftop pool is small but perfectly formed at the Ibis Styles Siem Reap.

Room rates at Ibis Styles Siem Reap are inclusive of breakfast, which is a buffet offered from 6 until 10 a.m. The breakfast included a buffet of hot British-style choices, including potato wedges, grilled tomatoes, ham, and baked beans. There were also a few random Asian choices: mixed vegetables with oyster sauce, vegetable fried rice, and fried noodles with vegetables. The best part of the breakfast were the two made-to-order bars, one for eggs and omelettes, and the other for various types of noodle soups. We sampled the latter and it was pretty good! Of course there were also sweets and pastries and various other bites to nibble on. Overall it wasn’t the biggest buffet breakfast, but it had more than enough to satisfy most.

Overall, the Ibis Styles was just fine. The staff were friendly but clueless, which is pretty par for the course. If you prefer to stay in an international chain, it offers good value for money in a great location, although better deals can be found at many independent hotels in Siem Reap.

Walk-in rates are higher than what you’ll find online. We were quoted $69 for twin rooms or double standard rooms, or $79 for superior rooms, but at the time of writing, online rates are as low as $43 in low season and $52 in high season, and cheaper on Booking.com than on their own site.

→ Check prices and book a room at Ibis Styles Siem Reap on Booking or Agoda now.

We may (or may not) earn commission on sales made through some links on this page. For more information about our policies, please see the disclosures section of our About Us page.