Posted on February 17, 2020 by Lina Goldberg
Get a quote for expat health insurance

Another newcomer on the Siem Reap restaurant scene is from one of Siem Reap’s up-and-coming young chefs, Seiha “Rat” Chomnab. At this point Chef Rat is pretty much a Siem Reap restaurant veteran, having previously worked as the head chef at Por Cuisine, the executive chef at Riversoul Design Hotel, and the culinary instructor for EGBOK. Now he’s finally opened his own place, Jomno Street Food, and it’s already getting rave reviews. 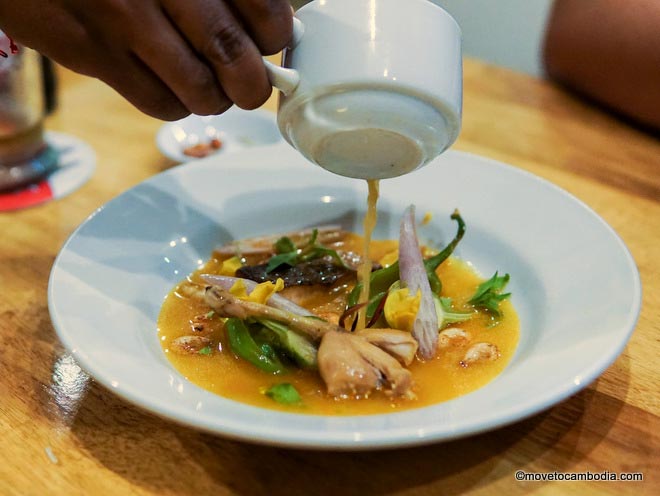 Around the Tonle Sap at Jomno Street Food

The restaurant describes itself as “modern Cambodian,” and the menu draws inspiration from street food and traditional dishes, mixing up flavors and combining them in unexpected ways.One example that we tried is the crispy chicken amok salad, a breaded ball of chicken amok surrounded by slices of beef tenderloin and banana blossom, all topped with a “lok lak dressing,” which is unexpectedly tasty, if not perfectly executed.

Jomno’s style may have been influenced by the nearby Cuisine Wat Damnak, the only restaurant in Cambodia to ever make it onto the “Asia’s 50 Best Restaurants” list. One of Jomno’s standout dishes is “Around the Tonle Sap,” a dish of pan-grilled fish, frog legs, water lily stems, krosang fruit, with a tangy coconut broth poured over it. This dish is remarkably similar to one originally served by Cuisine Wat Damnak’s chef, Joannès Rivière, under the name “Tonle Sap Rising.” 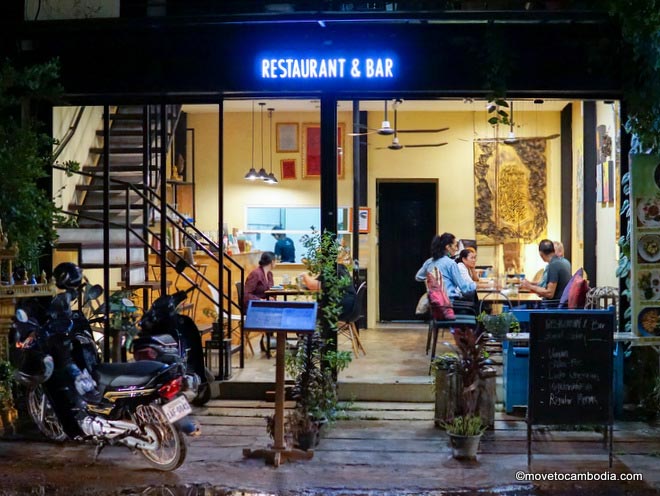 But because Chef Rat is Cambodian, he can take more risks with local cuisine than Rivière, who is French, might feel at liberty to. Where Cuisine Wat Damnak firmly sticks to local ingredients and flavors, Jomno Street Food fuses elements of European cuisine with Cambodian, no doubt drawing on Rat’s experience at Por Cuisine, which bills itself as an “East and West Restaurant.” For example, the grilled river prawn and ambarella salad with num banh chok noodles and coconut is delicious, all the more so for the unexpected addition of crispy chunks of bacon.

The menu also contains a vegetarian and vegan section, with several traditional Cambodian dishes adapted to suit non-animal-eaters. A sign posted in the restaurant says “vegan, gluten-free, vegetarian – do not worry we can help you.” Another sign outside mentions lacto-vegetarians. In a country where even simple vegetarianism can be confounding to some restaurants, seeing this level of specification is encouraging, (And perhaps a trend in Siem Reap? See our recent review of Banlle.)

Dishes are plated beautifully, as if it’s a restaurant charging much more than it actually does — with dishes priced between $2.75 and $6.50, even the thriftiest backpacker will have a hard time complaining about the prices. The restaurant is cash only, so hit the ATM before you go.

What I appreciated most was the chef’s creativity and willingness to try new things and take chances on different dishes and different flavors. Not all of them worked, but the experimentation is what will set this restaurant apart from the long list of Cambodian eateries in Siem Reap all serving the exact same menu, with almost no variation. Jomno Street Food and Chef Rat show a lot of potential and are definitely worth keeping an eye on.