Siem Reap: 280 miles from the beach

Posted on March 27, 2015 by Lina Goldberg
Get a quote for expat health insurance

The weather is starting to heat up again in Siem Reap and tourists are jettisoning their garments like snakes shedding their skins. Sartorial defiance is the order of the day as visitors stroll the streets of Siem Reap bare-chested or in bikini tops, oblivious to local mores or universal standards of good taste. They visit Angkor Wat in tube tops and short shorts, confident that the gods, spirits, and security guards will be honored by the sight of their underbutt. 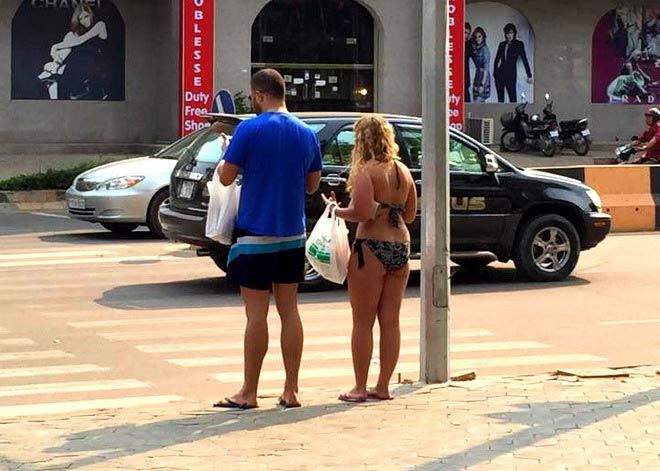 Siem Reap is not a beach town (nor is Phnom Penh, for that matter). So it’s perplexing to see tourists wandering the streets of a city that’s a full 280 miles from the nearest seashore — there aren’t even any direct flights — shirtless or in swimming gear.

Cambodian culture values modesty. Khmer women generally keep their shoulders and knees covered, while most men wear long sleeve shirts and pants even on the hottest days. It’s true that Cambodian culture is (slowly) changing, and you’ll sometimes see young Cambodian women in sleeveless shirts. But for the most part, Cambodians dress modestly.

Now before you say, “But I saw a Cambodian man standing in front of his house with his shirt off!” remember that he was standing in front of his own house. The difference between public space and private space is often blurred in Cambodia, where people carry on their lives in full view of tourists. However, you’ll usually only see Cambodian men shirtless if they’re at home, farming, mentally ill, or acrobats at the circus. And you won’t see Cambodian women in bikini tops, even at the beach. 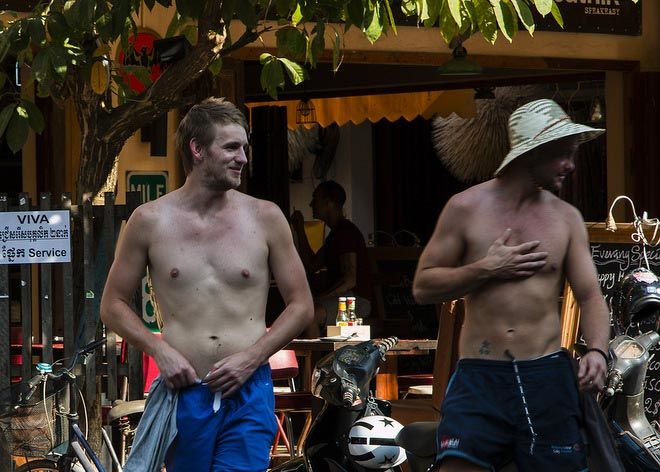 Of course visitors aren’t necessarily expected to share Cambodian values. But they are expected to respect them. Skimpy clothes at tourist-oriented bars and clubs — places where no Cambodian grannies are likely to be traumatized by the sight of your pasty chest or butt cleavage — aren’t entirely unacceptable. Prancing around city streets in the equivalent of underwear is; such behavior shows a total lack of consideration for the locals and their culture. Even more blatantly disrespectful is wearing revealing clothing while visiting Angkor Wat, the largest and most revered religious monument in the country.

A recent spate of naked tourists in Cambodia is provoking a backlash. Several visitors have been deported for stripping down at the temples, and three others were kicked out for riding motos naked through Kampot. The Apsara Authority is sick of streakers and skimpy outfits and reportedly will be strictly enforcing dress codes for visitors to the temples starting April 1st. 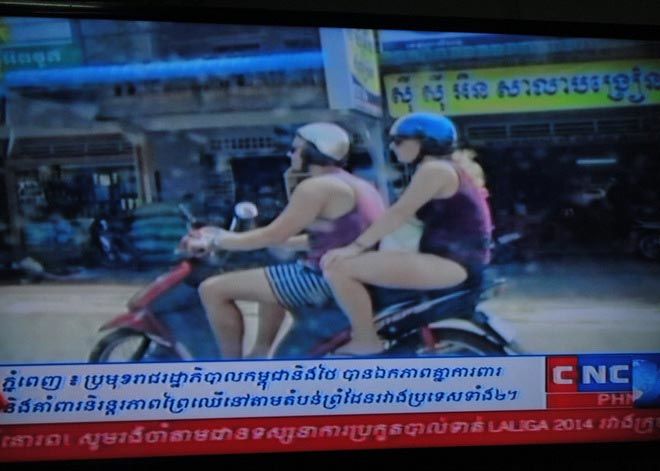 A CNC TV show about skimpily dressed tourists got a lot of attention in the local community.

A report on Cambodian television chastised tourists for dressing inappropriately. Photos from the piece were posted on Facebook and dozens of locals expressed their disgust with scantily clad tourists. One wrote, “Some tourists driving moto by themselves wearing underwear along the road in public. That make local residents feel unhappy with your culture bringing to Cambodia. I hope you understand well about the way of respect one’s local culture and custom. Respect a local culture and custom means you are respecting you yourself too!”

So show some respect for yourself, for your Cambodian hosts, and even for the expats who don’t want to see your sideboob. There are no beaches in Siem Reap, so keep your bikinis poolside and off the street. And, for the love of prahok, please cover your shoulders at the temples!

9 Responses to Siem Reap: 280 miles from the beach