Posted on September 2, 2018 by Lina Goldberg
Get a quote for expat health insurance

Before you start reading, are you looking for our full review of how to get from Bangkok to Siem Reap? If not, carry on.

If you’re heading from Thailand to Cambodia, the Bangkok to Siem Reap direct bus is the easiest way to do the trip overland. Why might you want to go overland, one might ask? For one, it’s a lot less expensive, with the direct bus costing between $28 and $35. For another, if you’re looking to transport large or bulky household goods or have large pieces of luggage, the direct bus is an easier option, particularly because they don’t make you change buses at the border. 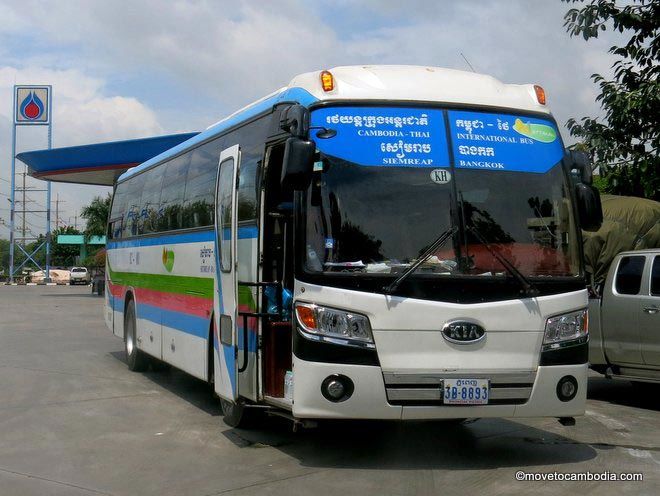 We have more in-depth reviews of both Nattakan (see below) and Giant Ibis (click here) on this route if you want to get into the nitty-gritty details, but in summary, I have taken both several times and think that Giant Ibis offers a better trip. They leave from a more convenient location near Khao San Road, the buses are brand new and the entire journey, including the border crossing, is smooth.  Although the ticket is more expensive at $35, it’s well worth the price.

If you’re going with Giant Ibis, tickets can be bought online and a seat reserved in advance for $35 with no additional service fees. You can print your ticket out or just show it to them on your phone or device and you’ll get straight onto the bus. Buying online allows you to choose your own seat, and advance purchase is recommended because the bus can get busy in high season.

You can also buy Nattakan tickets between Bangkok and Siem Reap (plus Bangkok and Phnom Penh) on BookMeBus. Tickets cost $28 in either direction, plus a 5% booking fee ($1.40 per ticket). The procedure is simple and you’ll receive an e-ticket that you can either print out or present on your phone when you arrive at the bus station. In high season the buses are often full, so it’s more than worth the booking fee to be able to reserve a seat in advance. 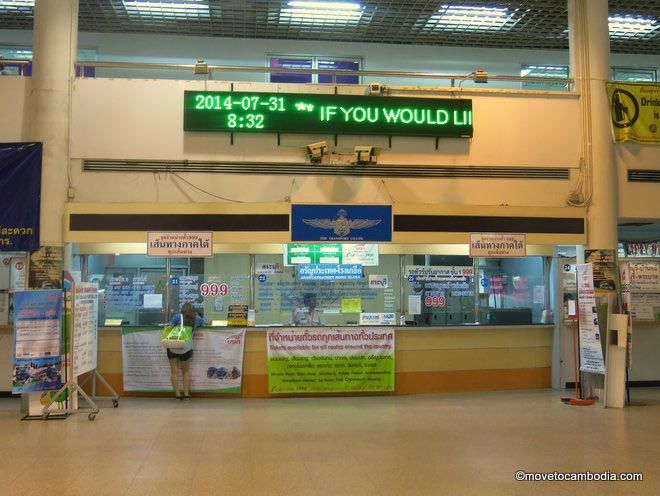 Tickets for Nattakan can also be purchased at the Northern bus terminal in Bangkok, sometimes called Mo Chit 2 bus terminal, sometimes called Chatuchak bus terminal. On the ground floor a booth labeled The Transport Co, Ltd. sells the Bangkok to Siem Reap tickets. Taxi fare to the bus station is around 150 baht (about $4.25) from Sukhumvit, making the trip a more expensive way to get a ticket than the online option unless you’re already in the area.

The bus journey on Nattakan

The direct bus from Bangkok to Siem Reap takes between 8 and 11 hours, depending on how crowded it is at the border. Passengers are allowed two bags each with a maximum weight of 20 kg, although the weight limit was not enforced when I hauled two suitcases of Ikea merchandise to Cambodia. There is limited storage space above the seats in the bus, so if you want to stow something inside, board early. The Nattakan Bangkok-Siem Reap direct buses are Korean, and seats are comfortable and lean back more than they probably should–watch out for the knees of the person behind you! 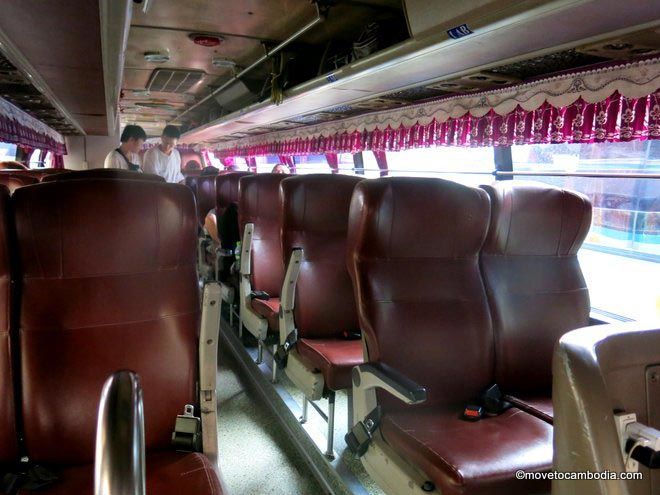 Nattakan buses: not not the worst place to spend eight hours…

On my recent trip, the 9:00 a.m. bus from Bangkok left on time. We were given a bottle of water and a snack, which was a limp-looking Asian pastry. There was a toilet break at 11:00 a.m. at a rest stop with a giant 7-11 and some fast food and local food options. At 1:10 p.m. we stopped at the Transport Co., Ltd. office in Aranyaprathet and were each given a ready-made hot lunch from 7-11, in my case it was shrimp and basil stir-fry. I’m ashamed to admit, but I thought it was pretty good if a bit on the small side. Vegetarians be warned, you’ll need to bring your own lunch. Later, we were given the choice of an orange juice or an iced coffee. You won’t starve if you don’t, but it’s definitely worth bringing some food of your own on the trip.

When you approach the Poipet/Aranyaprathet border, the bus will stop and let off all passengers. You can leave your bags on the bus (that’s why they call it a direct bus, there are no bus changes). You’ll then be expected to walk yourself through the various border checkpoints. There’s not a lot of instruction from the crew and the process can be confusing for those who have not done it before, but it’s actually quite simple. Just remember that you need to be stamped out of the country you came from and get a visa for the country you are entering (so two stops).

If you are heading from Bangkok to Siem Reap, after you go through both offices, turn back around and the bus will be waiting for you in front of the Grand Diamond Casino. They wait there for every passenger to complete their visa process, which takes an hour or two in total, so don’t be afraid to go into the casino and have a drink or a meal in the Chillax Cafe. It sounds awful, but the food isn’t too bad.

Most nationalities do not need to get visas in advance (check out our page about Cambodia visas if you want to know more). On the Cambodia side, a tourist visa costs $30. The bus company will request an additional $5 to have your visa batch processed with everyone else on the bus, and it is much quicker. Some days the bus company will require you to do this, other times you can secure your visa on your own.

If you choose to do it on your own, the visa officials will ask you for 1100 or 1200 baht (~$35) or if you insist on paying in dollars, which you should, they will ask for $30 and a 200 baht processing fee. There is no processing fee, it’s just a bribe. Arrive early and refuse to pay and eventually they will stamp you through. Telling other passengers the real price loudly will usually get you serviced more quickly, as they will be eager to get you out of there.  The other option is to secure an e-visa in advance. The price these days is $40, so you won’t save any money doing it that way, although it may help minimize border-induced rage that is not uncommon in Poipet. For more about crossing the Poipet border, check out our post on Crossing the Poipet/Aranyaprathet border overland. 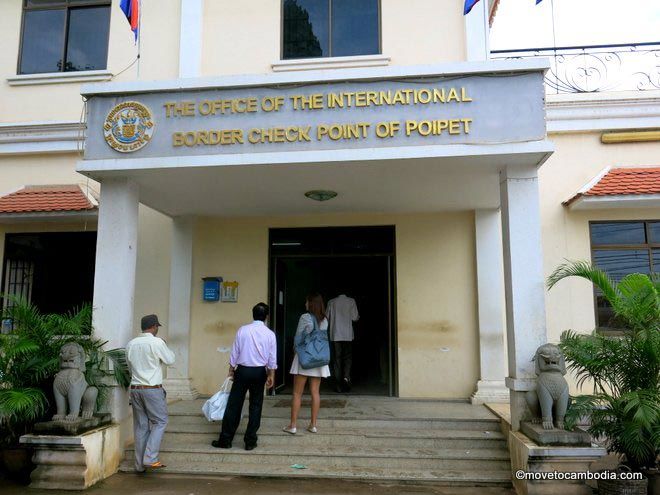 This is the official building that you get your Cambodia visa in. If you stop somewhere before the border, don’t bother wasting your money.

We’ve gotten reports that the bus will stop before you get to the border and try and get you to use an agent to process your visa for 900 baht by calling it a VIP service. They did not do this on my recent trip, so hopefully this is no longer an issue. However, if they do stop and try and get you to let them process your visa you have a choice of whether or not you pay. However, this so-called VIP service can be worth it, and it’s often faster and less stressful to just pay the extra money, so it’s up to you whether or not you think it’s a battle worth fighting.

On the Thai side, you will get stamped through and do not need to pay anything.

Overall, this is a much easier way to travel overland than the other methods I have tried, which always involve haggling at the border for taxis and buses. The Bangkok-Siem Reap direct bus is not as cheap as the mini-bus/casino bus combination (which is usually around $11 or $12) but the peace of mind is worth it. If you’re looking for more info on going the other way, check out our post on getting from Siem Reap to Bangkok.

Bus tickets purchased through links in this post generate affiliate sales for us. This does not affect our reviews for specific bus companies or routes! For more about how we deal with advertising, affiliate sales, and stuff like that, you can read more here.

191 Responses to Review: Direct bus from Bangkok to Siem Reap