Posted on March 6, 2014 by Lina Goldberg
Get a quote for expat health insurance

As of June, 2015, Elephant Express is no longer in business.

Elephant Express (aka Elephant Expresses Transportation) used to have a reputation for being the safest of all of the mini-bus services between Phnom Penh and Siem Reap. Based on a trip I took a few days ago, I think they’ve changed their business plan and are now the fastest mini-bus going from Siem Reap to Phnom Penh.

Elephant Express uses Toyota HiAces to get you from Phnom Penh to Siem Reap (or vice-versa).

The road from Siem Reap to Phnom Penh is not idea. Because the road is so bad, the trip between Phnom Penh and can take much longer than usual. The average is 5.5 to 8 hours, the shortest for mini-buses and taxis, the longest for big buses that stop a lot. Our trip on Elephant took about 6 hours, including three breaks. This was only due to break-neck speeds and generally unsafe driving.

The buses are 16-seat Toyota HiAces. The seats are a bit wide and more padded and comfortable than many of the other mini-bus services, but the vehicles are old and not particularly clean. You book your seats in advance, so be prepared to request by number if you want a specific seat. Directly next to the driver is 001, which they won’t book unless the bus is completely full. Seat 1 is the front row seat next to the window. 2, 3, 4 are a row behind the driver, with 2 being closest to the window. 5 and 6 are a pair of two behind that, and then there’s a foot-long gap to seat 7. The next row is a pair, 8 and 9 and a single seat, number 10. The last row is 11, 12, 13, and 14, and isn’t particularly comfortable if they are all full because they are more narrow than the other seats. Book in advance for choice seat selection, though they tend to run at lower capacity than other companies. 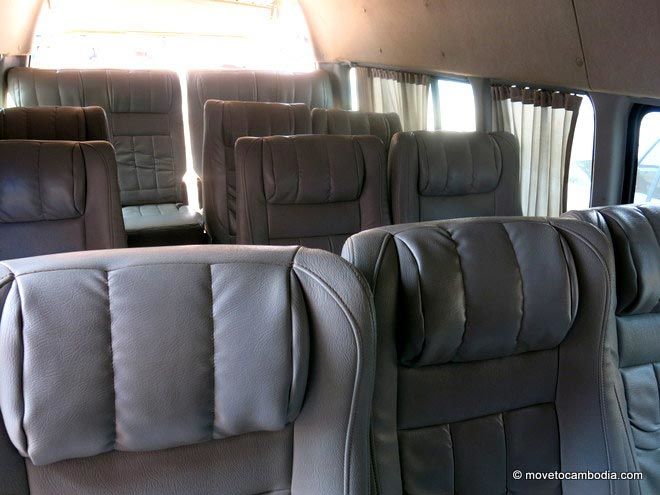 The padded luxury of the Toyota HiAce.

Most of the other companies use newer Ford vans, while Elephant’s vans are a bit older (and showing it). That said, they are more comfortable and the drivers do seem to drive as slowly and safely as one can expect. Our driver took as much care as possible to avoid the giant potholes along the way and didn’t seem to make any wild attempts to pass on the street.

The breaks were at a Tela gas station about an hour outside of Siem Reap, which had surprisingly clean toilets (bring your own paper if you are so inclined) and a selection of beverages and processed foods. The second break was at Arunas Hotel in Kampong Thom. Their toilets aren’t the best, but they aren’t squatters so it’s manageable. 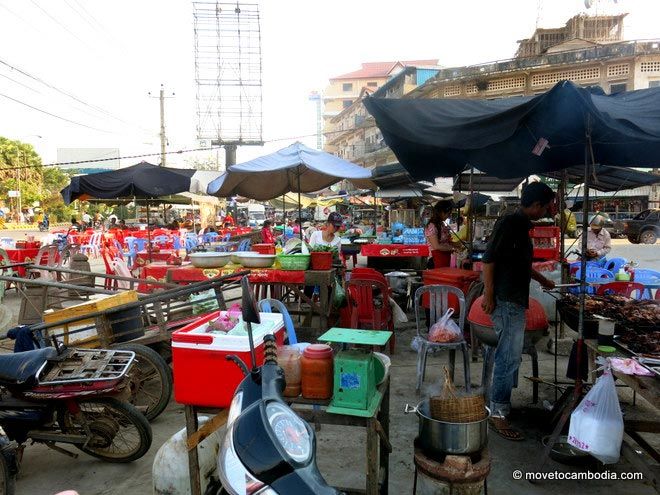 To avoid the “barang tax” skip eating at the Arunas hotel and hit the tasty food stalls outside Kampong Thom Market.

Arunas, like most other bus rest stop restaurants have very distinct dual pricing, with the rates they charge foreigners being nearly double what they charge Khmers. For this reason, I would suggest avoiding eating there, and instead heading to the food stalls directly next door, in front of Kampong Thom market. There you’ll find food sellers with tables and chairs selling various tasty treats including barbequed chicken, num banh chok, noodle soup, and fruit smoothies.

Elephant Express claims to offer a small bottle of water, moist towelette, and WiFi on board (Password: Elephant-XXXX, XXXX being the four-digit license plate number of the van), but we have never seen the WiFi working (they don’t even bother plugging it in) and the moist towelette was nowhere to be seen on this recent visit. If you’re desperate for Internet on the journey, get a 3G plan for your phone.

Seats on Elephant Express cost $8 for Khmers and $10 for foreigners. The price includes a tuk tuk pickup at your hotel in Siem Reap or Phnom Penh. Unlike other bus companies, they are unwilling to give expats the local price. And while I know that this is standard practice with transport companies in Cambodia, it still rankles me. Personally, I would be more inclined to take a service that doesn’t have race-based pricing such as Giant Ibis or another mini bus that charges expats the same as locals such as Mey Hong or Seila Angkor.