Posted on November 26, 2019 by Lina Goldberg
Get a quote for expat health insurance

The Travel Mart doubledecker bus that will painlessly take you from Bangkok to Siem Reap.

Travel Mart has two buses per day leaving from Bangkok to Siem Reap, one is at 9 a.m. and the other is at 1 a.m. and is a night bus. This post will concern my recent trip on the daytime bus, but I assume the night bus is pretty similar. The day bus has two pickups, one at Khao San Road at 9 a.m., and at Hua Lamphong train station at 9:30 a.m. 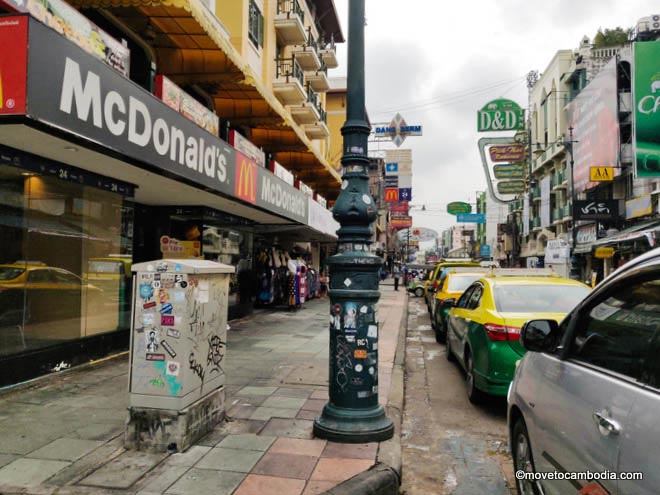 Meet in Bangkok at the McDonalds on Khao San Road.

The Khao San Road pickup is a bit confusing. I bought my ticket online through 12Go, and they had three pickup spots listed, one in the form of the address of the Travel Mart office, a photo of the McDonald’s on Khao San Road, and coordinates that were neither the office nor McDonalds. Additionally, the bus was parked a few blocks away. I think any of those four places would have been fine to show up at, because there were Travel Mart employees roaming the area looking for ticketholders, but I would have preferred a clear meeting place.

I ended up meeting a Travel Mart employee in front of the McDonalds who took me to the bus. Note that there are two McDonalds on Khao San Road, and the one near the end (here’s a map) is the one you want to go to. 12Go said I should be at the meeting place 60 minutes in advance, but because of traffic I got there 5 minutes before 9 a.m., and I wasn’t the latest one to arrive. Do be aware that in the morning Bangkok traffic is brutal, and give yourself enough time to arrive on time. 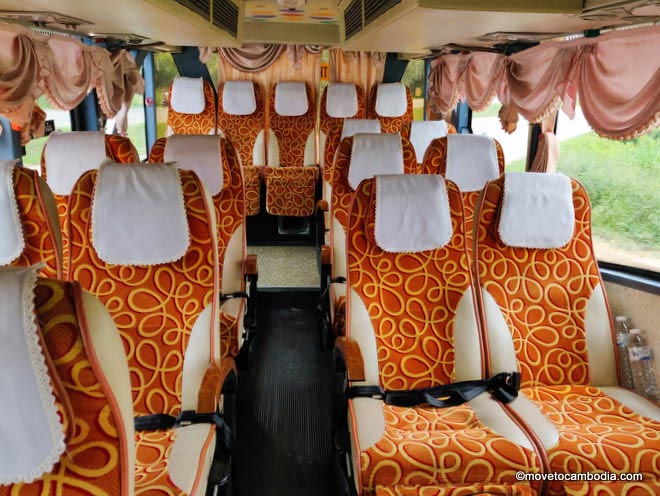 Comfy seats with a generous recline on the Bangkok to Siem Reap buses.

The bus itself isn’t new, but it is clean and comfortable. Seats are wide, with a generous recline and footrest. It’s a double-decker bus with a toilet and a few seats downstairs, but customers are directed to the upstairs, which has about 40 seats. The downstairs toilet being separate from the customer seating upstairs is a huge improvement over some of the other buses which have a toilet on board that stinks up the entire bus.

At each seat is a booklet of information about the bus journey from Bangkok to Siem Reap. The information for the 9 a.m. bus that I was on said that Cambodian visas cost $30 and one photo, or $30 +100 Thai baht. They also give the option of using Travel Mart’s visa express service for $40 or 1400 Thai baht. They say “is more expensive on arrival $10 but you will get: visa express (you don’t need to stand in line, staff will do it for you) and Express stamp (you don’t need to stand in line at Cambodian arrival).”

This is refreshing honesty, when other companies like Nattakan try and trick you into using their visa service. 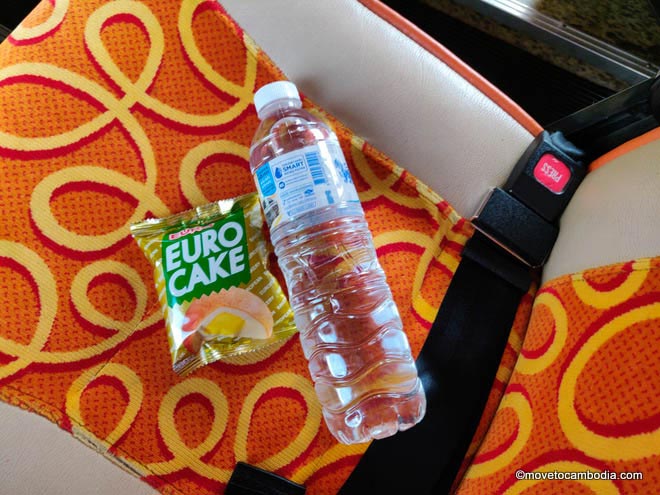 Amenities on the Bangkok to Siem Reap bus: water, cake, and yes, a seatbelt!

There is WiFi on the bus (Network: Travel Mart Bangkok Password: 0863121100) that seemed to work from Bangkok to the border (about 5 hours).

Soon after we got started, a bottle of water and a snack (a small packaged cake) was passed out to each customer.

At about 11:30 a.m. we stopped at a rest stop with a restaurant and bathroom for about 25 minutes. The bathroom is clean but no toilet paper is provided, so bring your own. The rest stop served a selection of Thai dishes which are served over rice for 40 Thai baht. 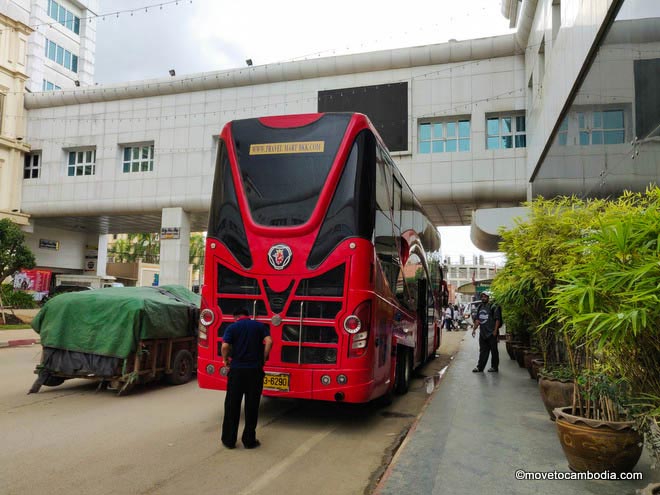 The Travel Mart bus waiting at a casino at the Poipet for all passengers to complete their visa application process.

The bus did not have an English speaking attendant on board, but two showed up once we got to the border. At Aranyaprathet, the Thai side of the border, we were hustled off the bus, directed to a mall where we could use the bathroom, or to an ATM (which dispenses Thai baht only) to get money for our visa, and then walked towards the border crossing. Most people on my bus had already purchased e-visas online, and the Travel Mart staff only halfheartedly tried to get the rest of us to use their VIP visa service. When I declined, they directed me towards the visa-on-arrival office to do it myself. From start to finish, crossing the border took an hour, but there were no lines, but during busier times it can take up to three hours.

I’m not going to go into great detail about crossing the border because I have elsewhere (if you haven’t done the crossing before, definitely have a read before you go), but know that you need to exit Thailand and get a stamp, then get a Cambodian visa, then get the new visa stamped. So three stops. If you are going the other direction, you need to get stamped out of Cambodia, then go to the Thai immigration office where citizens of most countries get visa-exempt entry (so only two stops). Also know that you do not need to pay for any special immigration services, and a Cambodia tourist visa costs $30 in US dollars. 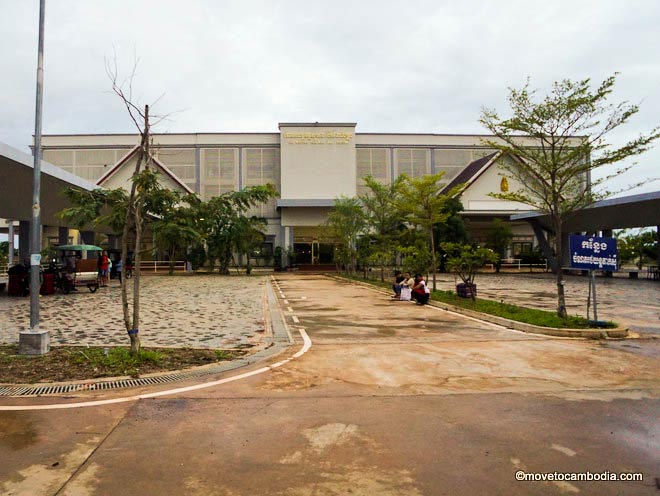 The Western Bus Station in Siem Reap where Travel Mart drops off at.

From the Cambodia side of the border, it usually takes another three hours to get to Siem Reap. In Sisophon, we stopped and took on several additional passengers.

Travel Mart drops passengers off at Siem Reap’s “Western Bus Station” which is about 4 miles outside of town. They have a bunch of tuk tuk drivers waiting there who will take you to your hotel in town for $3.

For the price of the daytime bus, which is $24 or $25 depending on where you buy it, Travel Mart currently offers great value for money. They are less expensive than the two other direct buses, Nattakan and Giant Ibis, which are $28 and $35 respectively. (Note that all of the other buses on this route are not direct buses, meaning, you have to switch to a second bus at the border).

The Travel Mart Bangkok to Siem Reap buses still aren’t very well known, so there aren’t too many passengers and there is room to spread out. The staff were competent, and although they weren’t quite as good at the border as Nattakan or Giant Ibis, they also didn’t charge extra (like Giant Ibis) or try and scam you (like Nattakan).

Overall, while I still think Giant Ibis is still on top, offering a better service overall, it’s significantly more expensive. If you’re on a budget, I would definitely consider Travel Mart for your Bangkok to Siem Reap bus needs.

You can buy a ticket online from Bangkok to Siem Reap on Travel Mart (or Siem Reap to Bangkok) on two sites, 12Go and Bookmebus, and just show your receipt on your phone when you arrive. Tickets on 12Go cost $24 plus a processing fee of less than $1. Tickets on Bookmebus cost $25, plus a $1.25 service fee to use a visa, but they let you select your seat online in advance.

Where does the Travel Mart bus depart from in Bangkok?

Staff from Travel Mart will meet guests at the McDonalds on Khao San Road and then walk or drive them to where the bus departs, which is here:

Where does the Travel Mart bus arrive in Siem Reap?

In Siem Reap, the bus arrives at the Western Bus Station, which is about 4 miles/6.5 km from the Siem Reap town center. It’s not yet on Google Maps, but this is the exact location: