In the Shadows of Utopia: Lachlan Peters on his Cambodian history podcast

Posted on May 13, 2021 by Lina Goldberg
Get a quote for expat health insurance

To call Lachlan Peters’ excellent In the Shadows of Utopia a Khmer Rouge podcast is really an understatement. Like the best history podcasts it is far-reaching, covering a good 3,500 years before the Khmer Rouge came to power, starting with the rise and fall of the Khmer Empire. But it does so with the intention of explaining what happened, before, during, and after the infamous 1975-1979 period, and in a way that is detailed enough to keep old-time Cambodia watchers tuning in, while still being accessible to listeners who may not know about much more than the killing fields. 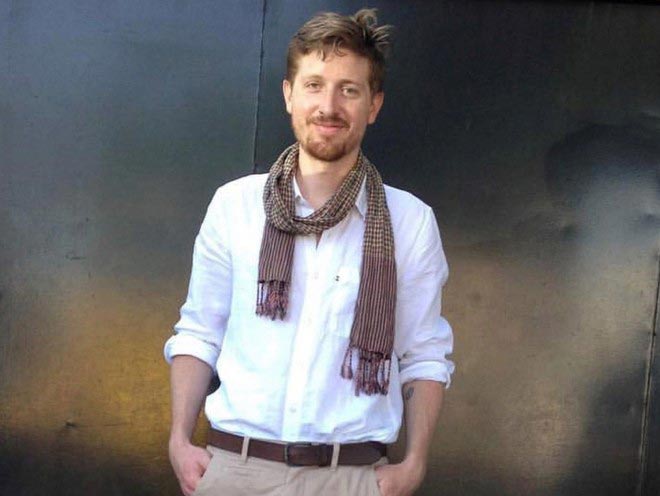 Lachlan Peters, the creator of the In the Shadows of Utopia podcast. Photo provided.

Episodes are sporadically released and three years in, In the Shadows of Utopia has “only” covered from 2000 BC to 1955, with bonus episodes from luminaries including David Chandler. All this to say, it’s a great time to start listening and get caught up on Cambodia history before the podcast gets to the Khmer Rouge period. I did a covid-friendly email interview with Lachlan, the creator of In the Shadows of Utopia, and at the end there are links to where you can listen and how you can support the podcast.

MTC: What inspired you to start this podcast?

LP: “Like many people outside of Cambodia, my first exposure to the country’s past was through the movie The Killing Fields. I was 15 when we watched it at school, and it left such an impression on me that I felt I needed to know more. This led me to read First They Killed My Father, and by the time I finished high school I was regularly picking the topic for various assignments. At university I specialised in conflict and genocide studies, culminating in an honours thesis comparing the treatment of certain groups under the Khmer Rouge and in Myanmar.

Though I enjoyed my studies, I wasn’t interested in a career in academia. After a few holidays and extended stays in Cambodia I wondered if I would ever ‘do anything’ with the time and energy I had put into learning about this beautiful country and its tragic past.

Then, around 2016, I started listening to podcasts more and more. I loved Dan Carlin’s Hardcore History and I was surprised that no one had produced something like this about Cambodia. I realised that podcasting would be the perfect medium to channel my enthusiasm for Cambodian history into something that might help others discover the country’s past. I wanted to make something that could appeal to people who know next to nothing about Cambodia or the Khmer Rouge, while digging deep enough to offer something to those who are more familiar with this important subject.”

MTC: So tell me the timeline of the podcast — how many episodes have there been, and what’s the schedule going forward?

LP: “So far there are fourteen episodes (not counting the bonus interviews with historians) and the main series has covered the pre-Angkorean era (prior to 800 AD) all the way through to the end of First Indochina War and the subsequent elections of 1955. Producing the podcast by myself was — and still is — a huge learning process, but I have gotten into a bit of a rhythm now and can generally research, write and record an episode every couple of months or so. I would say that this is roughly the halfway point in terms of ‘the story’. If things go to plan, then by the end of this year I hope to get through the Cambodian Civil War and then after that spend as much time as I need explaining the nightmare that followed it.”

MTC: Where in the story do you think you will finish? Do you have a historical endpoint in mind?

LP: “The focus of the story will be the Khmer Rouge regime, but with ample time given to the circumstances of Cambodian and world history that allowed them to take power. However, I imagine the series will provide a relatively detailed explanation of what happened in the aftermath. I find that people often have a lot of questions about the People’s Republic of Kampuchea, the relationship of the international community to the remnants of the Khmer Rouge, as well as the recovery of Cambodia and its people following this national trauma. I think the conclusion of the show will also explain the efforts to bring some form of justice, so I can imagine the show’s eventual scope covering right up until the present day with the Khmer Rouge Tribunal.” 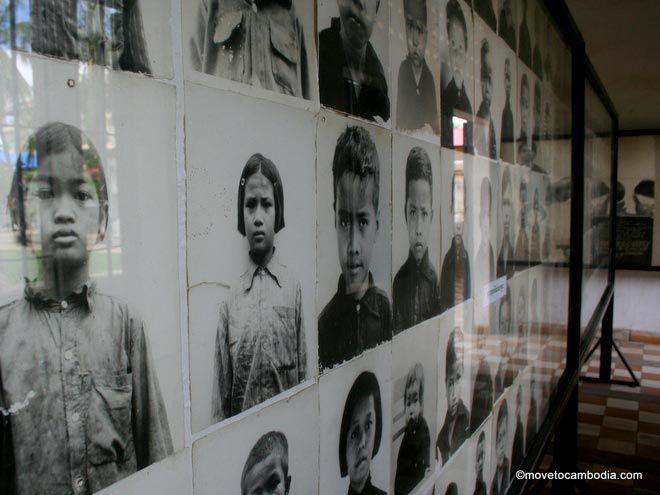 Photos of just a few of the victims of the Khmer Rouge that passed through S-21.

MTC: What particular angle of Cambodia’s Khmer Rouge history interests you most?

LP: “I can still remember the first time I travelled to Cambodia in 2011, I had this powerful feeling that everywhere I looked, I was looking at a potential setting for the crimes committed by the Khmer Rouge. Even walking down a mundane sidewalk in Phnom Penh gave me this feeling. Years later, on my most recent stay and while working with the Documentation Center of Cambodia (DCCAM), we visited a completely average looking high school in Prey Veng to do a talk with students and staff. Afterwards I was shown an area behind one of the classrooms, an unremarkable patch of grass which also happened to be the site of a mass grave. This occurred on more than one school visit and served as a kind of confirmation to some of those early feelings I had when visiting the country.

From a historical viewpoint, or from my background in genocide studies, I would interpret this in terms of the ‘totality’ of the regime, the sheer scale at which the Khmer Rouge controlled the country. The pervasiveness of the regime is something that many survivors use the phrase ‘a prison with no walls’ to describe. The emptying of the cities, the closing off of the borders, the utopian vision that killed so many innocent people. There is so much to consider when trying to understand how and why it happened, and as someone interested in that side of history it continues to provide territory to explore.”

MTC: How are you planning to deal with some of the more controversial or incendiary topics relating to the Khmer Rouge?

LP: “I think many of the bigger arguments about the history of the regime came out of the early scholarship, when things were less certain and often still ‘happening’ and were sometimes influenced by what could very simply be explained as political bias. Enough time has passed for most of these contrary ideas about the Khmer Rouge to be incorporated into a nuanced understanding of what they did and why. However, some topics remain vehemently argued over.

That is one of the most fascinating things about studying history, looking at how and why a historian comes to their ‘version’ of events. But one of my goals was to try and provide a balanced response to some of the more controversial areas of the history. I have formed my own opinions based on my years of study, but even in these instances where I am more convinced by one historian over another, I am trying to include both sides of that argument. For instance, questions over using the term ‘genocide’ in relation to the Khmer Rouge, or the role that communism played as opposed to racism in motivating certain policies, my explanation of these areas will provide both sides of the debate, why these historians have differed and what I personally find more persuasive. I hope that by showing my ‘working out’, as well as that of the historians, people will be able to come away from the series with an understanding of Cambodian history that incorporates these areas of debate rather than simply the version that I think, or the version that one historian thinks.” 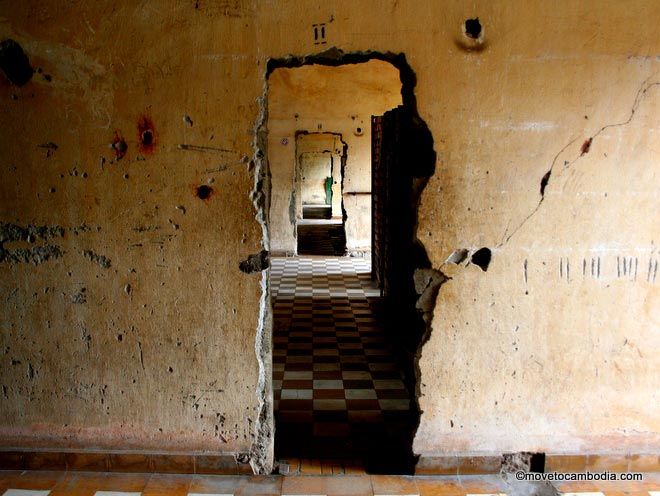 A view from S21, what is now the Tuol Sleng Genocide Museum.

MTC: The Khmer Rouge regime was such a dark period of history, how have you decided to handle the tone of your show given this subject matter?

LP: “At its core, the show is an attempt to explain how and why a quarter of the Cambodian population died from 1975-1979. That is a tragic question to answer, and presenting this series is not a task that I take lightly. I’m all too aware that this is not a history I experienced personally, and so I try to explain it with as much respect and honesty as possible. I’m also conscious of the fact that, while this is a dark and harrowing subject matter, indulging too much in that darkness could be seen as voyeuristic; essentially, there’s a balance to the tone of the show that I’m always striving to achieve.

That being said, the series has not yet reached the period of the Cambodian Civil War or the Khmer Rouge regime, so when discussing matters far off in the past or in the early 20th century, I have felt able to explain aspects of the story in more of a light-hearted way, which is closer to how I naturally communicate with people. For instance, I’ve included the occasional pop-culture reference and attempted to sing along to ‘La Marseilles’. However, I consciously included these moments predominantly in the earlier parts of the series because I am aware that they will not last throughout.”

MTC: What sort of listener did you think this show would attract when you first started, and now that it has been going for a few years, were you right?

LP: “Well, if I am being honest, I just wanted any listeners at all when I first started! But in terms of who I was trying to attract, I guess I was mostly thinking about making this show for an audience that I knew best, and in the end that meant aiming it at a younger version of myself. Someone who was interested in history, who wants to go out and read all the books they can but might need a kind of foundation for all of that to start with. I wanted to make something that was basically an explanation of all that I’ve come to learn about Cambodia, for someone who was just starting out on that same journey.

So far I think that has worked out. Generally speaking, I’ve had history podcast fans respond positively to it as a contribution to that ‘genre’, but I have had some really enthusiastic feedback from people who have recently travelled in or moved to Cambodia and found the show helped them understand the country, teachers and students engaged in the topic have also reached out in the same way.

The one thing that I didn’t quite expect was the value that the series has had for many Cambodians themselves. Second-generation members of the Cambodian diaspora have been in touch to let me know they found the show useful in explaining parts of their own history that were missing from their education, or perhaps something that their parents did not feel comfortable sharing. That has made me really proud.”

One Response to In the Shadows of Utopia: Lachlan Peters on his Cambodian history podcast