From forest to frontier: Interview with Jacob O. Gold about the Kuay People

Posted on March 25, 2015 by Lina Goldberg
Get a quote for expat health insurance

Have you ever heard of Cambodia’s Kuay people? Me, neither, until now. The Kuay people are a stateless ethnic minority who have lived in Cambodia since before the time of the Angkorian Empire.

Move to Cambodia talks to Jacob O. Gold, an ethnographer who is working to record traditional Kuay language and culture before they are erased by habitat destruction and assimilation. Jacob, a PhD candidate at the University of Illinois-Chicago, has spent the last two summers studying the Kuay people, and he’s here to talk about their rich, interesting culture, as well as how you can help preserve it. 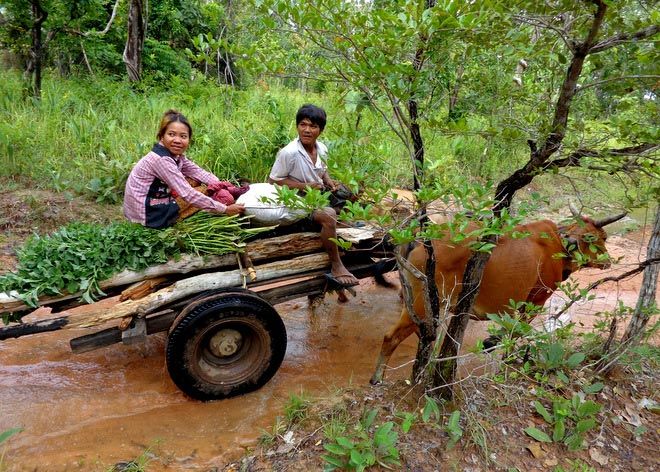 A Kuay couple carrying forest goods on a homemade oxcart.

Who are the Kuay people?

Cambodia’s ethnic minority Kuay (sometimes spelled Kuy, and also known as Suay in Thailand, although another group go by a similar name) are a people with a long, fascinating history of both independence from, and interaction with, the Angkorian Empire and the Khmer kingdoms. The Kuay have only recently become the topic of academic research, thanks to the cessation of thirty years of conflict and the still-incomplete de-mining of Cambodia’s once heavily-forested Northern Plains region that encompasses parts of Preah Vihear, Stung Treng, and Kampong Thom provinces.

The Kuay people speak a language in the Katuic branch of the Mon-Khmer family. The Kuay subgroups and their closest ethnolinguistic relatives live in patches across a broad swatch of land encompassing northeastern Cambodia, the south of Thailand’s Isan region just across the border, as well as southern Laos and the Central Highlands of Vietnam. Kuay communities occupying forest habitats on the margins of successive Khmer states and likely supplied the Angkorian Empire and subsequent Phnom Penh kings with iron, elephants, and a wide range of botanical forest products. These goods were vital to the Khmer, but were also prized items for the Chinese mercantile networks spanning the region.

The Kuay people, from numerous indications, seem to have survived as a distinct yet “stateless” people owing precisely to this age-old ability to exchange and negotiate with the surrounding Khmer majority. Semi-intact Angkorian temples “hiding”— to borrow a term from Cambodia’s national anthem— in the greenery of the Preah Vihear Protected Forest and elsewhere in the region attest to the fact that Khmer settlements, inseparable from land cleared for wet-rice agriculture, have ebbed and flowed around the Kuay people over the centuries of the region’s political tides.

Today, the Kuay are adapting to the wet-rice regime with as much zeal as their new Khmer neighbors. They have probably had to do so before. Kuay lore is full of stories dealing with Kuay-Khmer relations and overcoming the asymmetries of power inherent in these interactions. My hypothesis is that during Angkorian times and possibly earlier, the ancient equivalent of the Khmer “bong thom” would establish a local fiefdom and tax the Kuay population in the form of gold, iron, elephants, valuable forest products and mercenaries with reputedly magic swords. In exchange, the Kuay say, they were granted autonomy and protection from the slave-raiding and outright displacement that menaced so many other forest peoples. 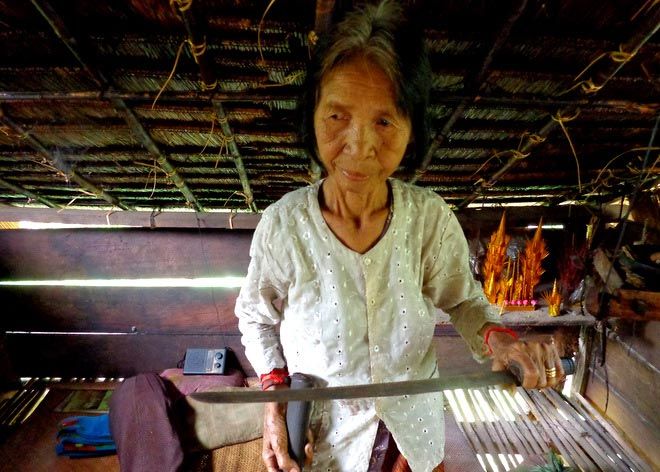 What are the current issues facing the Kuay people?

The new and improved accessibility of the region has come with a cost: convenience for logging, mining and rubber interests with the budgets, influence and machinery to exploit the land with great speed and intensity. In the wake of an ever-receding “tree line,” ambitious Khmer homesteaders are streaming into the region from all over the country in order to start new lives and found new villages on freshly-opened farmland.

Ethnographers like me are rushing to record the Kuay people’s language, customs, and forest-knowledge before generational turnover, cultural assimilation and habitat destruction change things forever.

How have you been received as a researcher by the Kuay communities with whom you work?

The Kuay, despite their reputation for fierce independence and privacy, were surprisingly eager to engage with me during my last two summers of fieldwork. I am not an activist who wants to drown out Kuay voices with the saviorist rhetoric of a barang bullhorn, but the Kuay themselves opened their homes and farms and forest paths to me, their spirit healers spoke to me, their old folks told all sorts of stories to me— not only about ancient battles, but also of surviving the American carpet-bombing of the Vietnam War era, Khmer Rouge raids, and fleeing from fierce combat in one of the most active theaters of the civil war that only ended in the mid-1990’s.

I feel that this openness comes from their own feeling that the past is becoming increasingly inaccessible to them, and as one of the only researchers out there with a digital recorder and notebook and camera and GPS gadgetry, I can help document the lived present and recounted past of the Kuay, as well as their unique repertoire of ethnobotanical knowledge. Hopefully I can figure out the best way to repay my karmic debts to these people—they will be the ones to tell me how. 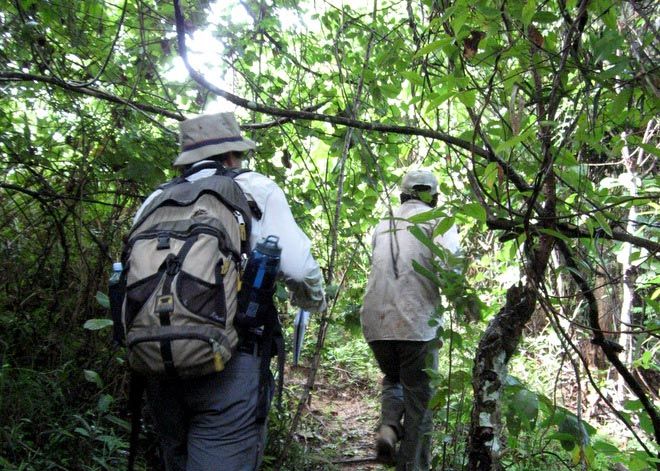 Jacob walking through the forest with a traditional herbal healer. The Kuay use well over a hundred botanical species for every imaginable purpose: medicine, incense, spirit offerings, handicrafts, and sustenance.

How can Move to Cambodia readers get involved?

In terms of my own research, I am hoping that this coverage will bring visitors and, with luck, backers to my Kickstarter campaign for a third season of fieldwork that will be crucial for taking my project to the level needed to bring in the big dissertation grants I will be applying for next year. At that point I will no longer hit you good folks up for a few of your hard-earned riel as I continue to share my findings, hypotheses, and fieldwork yarns with a wider audience than I can reach inside academia’s ivory tower.

I will be putting up new short video content to replace what’s up there soon. My goal is to raise $3,000 dollars, and I am almost at 50% of that with almost half the fundraising time to go. Any sort of donation would be hugely appreciated and there are goodies available to backers as well. Here is the link to my Kickstarter page.

In addition, simply googling key phrases such as “Kuay people” and “Prey Lang” (the general term for their endangered forest-at-large) will guide readers to various groups working to ensure Kuay cultural survival, but as a social scientist I’m not comfortable affiliating myself with these groups or giving an outright endorsement to their agendas and strategies, even though our general goals may overlap. Nevertheless, some of these groups are doing important work.

Jacob Gold is a PhD candidate at the University of Illinois-Chicago. He can be reached at [email protected], and you can help fund his research on Kickstarter.