Where to shop for food in Battambang

Posted on June 7, 2016 by Allison Jane Smith
Get a quote for expat health insurance

So you came to Battambang for work or maybe because you were visiting and got stuck (it’s been known to happen). Now you need to feed yourself.

Wondering where to stock up on produce? Start at Battambang’s local markets.

In Battambang, there aren’t many grocery stores or supermarkets like at home or in Phnom Penh; you will have to go to the open air markets. Here are some tips to make the most of your shopping experience:

While there are other markets in Battambang, the ones that most foreigners go to are Psar Nath and Psar Boeung Chhoeuk.

Psar Nath is located right by the river in the center of town, and is known derisively by Cambodians in Battambang as “the tourist market” because of the number of tourists that come through. Because of this, prices are considerably higher than at Boeung Chhoeuk.

However, Psar Nath is open late, making it the go-to stop for after-work grocery shopping for both foreigners and Cambodians. The fruit stalls on the south side of the market are open very late, often past midnight.

Battambang’s Psar Nath is the place to go for late night veggies.

Boeung Chhoeuk is northwest of Psar Nath, close to the bus stations. It offers much more selection than Psar Nath and is much cheaper, but the food vendors start to leave around 11 a.m. Food is sold on the ground floor, with seamstresses on the second (to keep in mind if you need cushions made or want to rent a dress for a wedding).

Learn a bit of Khmer

You don’t need to be fluent; just learning the numbers and a few phrases will get you far and will make prices drop.

Point at whatever it is you want to buy, ask Anih, t’lai pon man? (How much does this cost?) and you’re off.

Also useful is ah tay, orkun (no thank you) for when you’re offered a pig’s head or some unidentifiable herb you don’t want.

Keep in mind that sometimes numbers are expressed a bit differently than in English, so if you’re quoted ha sep (50) for that bag of peanuts, it’s not 50 or 50,000 riel. It’s 5000 riel, or 50 hundred. If you’re unsure, you can confirm by waving money at them or asking pram poan?

Whether you buy your eggs in the grocery stores or local markets, they’re cheaper than back home!

Even if you’re shopping at the more expensive Psar Nath, prices drop if you regularly frequent the same vendors, so find a few vendors that usually have what you’re looking for and stick with them. Chit chat with them a bit each time you visit and you’ll save money.

If you’re going to Boeung Chhoeuk, you have to go early, but even if you’re going to Psar Nath, try not to wait too late in the day. The later you go, the more picked-over everything will be, and it will have been sitting in the heat, flies buzzing around, for that much longer.

Don’t be too polite

Don’t wait for someone to take notice of you standing there. Start pawing through tomatoes and a bag or dish will appear for you to put them in. Similarly, don’t be too concerned about respecting personal space. People are not going to make a huge effort to move out of your way, so it’s okay to gently push past.

Note that it’s not customary to haggle over the price of food as it is for clothing or other goods. The price is pretty much the price. 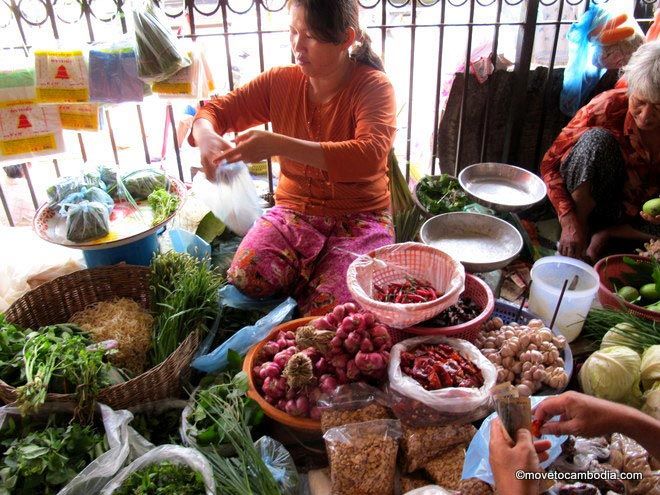 Don’t be afraid to just start picking out what you want.

Looking for things you can’t find at the market? There are shops around town with the speciality items you may be looking for, though there is not the same availability of foreign goods as in Phnom Penh or Siem Reap.

We also have a full guide to the Western grocery stores in Battambang.

At Chea Neang Drink Shop, commonly known as the Western shop, you can find a wide range of western products, including natural yogurt, cheese, baking supplies, canned beans, lentils, muesli, and even tahini. They also have a wide range of wines and are able to break large notes.

Similarly, large supermarket Heng Chhay Li Grocery Store  stocks fresh milk and yogurts, cheeses, canned and packed foods and drinks, as well as some frozen items. This is also a good place to break that $100 or $50 bill.

And a special tip for those looking for avocados, rarely available at any of the markets – White Rose, known primarily for its smoothies, sometimes has them for sale. Walk up to the fridge at the front and take your pick.

Open daily, from before dawn, with some stalls staying open as late as midnight
Where Street 3 and Street 113 meet, Battambang