Posted on March 14, 2014 by Steven Halcrow
Get a quote for expat health insurance

It’s true that one of the appealing things about moving to Cambodia is the expat’s ability to survive in-country without learning much of the local language. But just because you can get by without learning to speak Khmer, does that mean you should? Here are six reasons you should bite the bullet and start learning Khmer the minute you arrive. 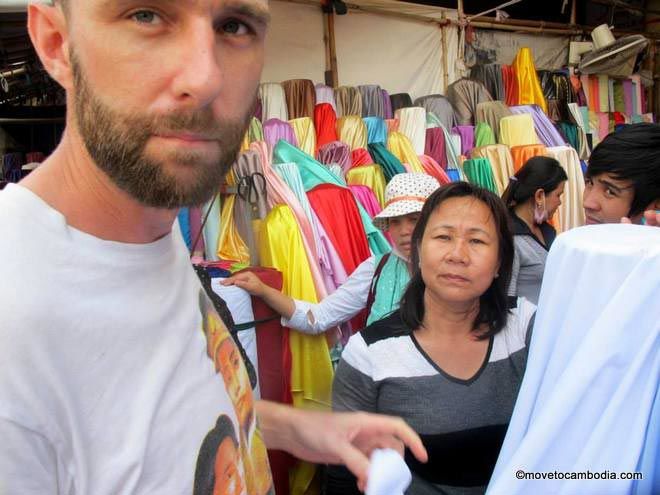 Nothing puts an anxious mind at ease like understanding what people are saying about you.

Tuk tuks and food are two staples of life in Cambodia (although not to be confused with one another). If you learn even basic Khmer you will find that both will cost slightly less in the short term, and add up to a considerable saving in the long term. At the market, it will help to find a stall owner that patiently waits as you try and decipher what she has said, instead of shouting her friends over to gather round and laugh in your face as they watch you struggle with your own feeble grasp of Khmer numbers. Of course you don’t need to learn Khmer–tuk tuk drivers are happy to speak English, especially if they say ‘ten dollars?’ and you agree. A few basic phrases lets the driver know that you’ve been here long enough to know a fair price.

2. It will make you look less stupid

Standing in the street speaking loudly in broken English will not get you very far unless your goal in life is to have passers-by pause to take note of how ridiculous you sound. Your English may even deteriorate to the point where it doesn’t even make any sense in English as you repeatedly fail to adhere to even the most basic of grammatical rules. This attempt to over simplify what you are trying (badly) to say is a tell tale sign of a breakdown in communication. You will look and sound considerably less ridiculous if you are trying to speak in rudimentary Khmer as opposed to speaking with confidence in unbelievably poor English.
.
3. It will make you feel more intelligent

Khmer is not widely spoken outside of Cambodia, but being the native tongue, it certainly comes in handy when you’re here. Your communication skills will become sharper and you will generally feel more in tune with your environment, allowing you to get so much more out of your experience here. The UN may not be knocking down your door as a result of your heightened sense of communicative awareness, but you will find a definite sense of intellectual satisfaction the first time you are able to conduct a fair negotiation with a tuk tuk. This is in addition to the elevated sense of pride as you watch all the other expats filing out of Lucky supermarket with cornflakes and cheese as you head to Kandal to haggle over the price of a pig’s ass.

4. It will not be expensive

Teaching methods in Cambodia still leave a little to be desired, but at least it’s cheap. Some Khmer lessons involve simply turning up and listening to the teacher speak only Khmer the whole time. The idea is that you listen and observe, and even though a lesson may be as little as $5, you can get a similar experience sitting in a crowded noodle shop where you will only be charged a dollar for soup. You can start to pick up words from just listening and the language may start to sound familiar as you identify commonly used words, but a proper lesson holds a far greater value and good teachers are out there. If you find one it still won’t cost more than $6 or $7 per hour.

5. To better understand when you’re being insulted

They say that ignorance is bliss, but sometimes it helps when you are surrounded by a group of Cambodians all laughing at your overwhelmingly foreign attributes—such as your sweatiness or your hopeless attempts to communicate—to be able to understand a few specifics about what exactly they find so funny. Merely standing there with a slightly imbecilic grin on your face as the comments bounce off you will not cause you any long lasting damage, but if you are able to offer a basic short rebuttal indicating how rude they are being, they will, most of the time keep their comments to themselves and maybe even wait until you are out of earshot before they go back to ridiculing you.

6. Because you are not at home any more

Some would argue that moving to a foreign country and not even attempting the language is just plain rude. Try whenever you can to speak the lingo, the locals are certainly not under any obligation to speak English. You don’t have to go and hang out with every Khmer that you exchange words with but after a while you may find that smiling incessantly and mumbling barely coherent Khmer/English noises under your breath when getting change for a $100 bill at the Panda Mart (oh, the guilt), tends to wear a bit thin. Kids working in marts are always keen to exchange a few words in English and this can give you a vague feeling of self worth (if you’re not already working as an English teacher) but wouldn’t you get a far greater kick out of forcing a laugh from the ancient woman who spends all day at the market selling pieces of a chopped-up pig? With a little bit of basic Khmer, she may even give you the local price.