A visit to Anlong Veng, the last Khmer Rouge stronghold

Posted on February 27, 2019 by Pete Ford
Get a quote for expat health insurance

The small town of Anlong Veng, along the Thai border, would not likely feature on many people’s Cambodia travel itineraries. But there are good reasons for the adventurous and the curious to make the 150-kilometer journey north from Siem Reap. 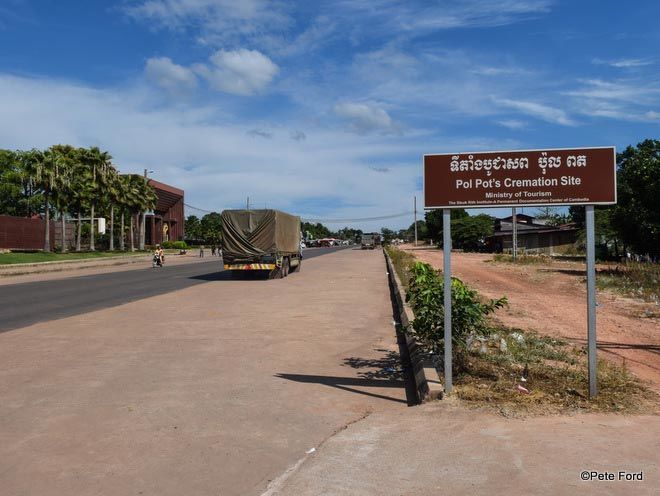 One of Cambodia’s most alluring tourist attractions.

Nestled at the bottom of the Dangrek mountain range that forms a natural border between Cambodia and Thailand, modest Anlong Veng could easily be mistaken for countless other rural backwaters across the country. Like them, it has cheap guest houses, shops selling Chinese mobile phones, roadside BBQs, and seedy karaoke bars clustered near a covered market.

But there are also stunning mountain views to be enjoyed and an abundance of rustic tranquility. More important, Anglon Veng offers plenty of historic interest. This was one of the final strongholds the genocidal Khmer Rouge retreated to after their regime was overthrown in 1978. It was also the place where their leader, Pol Pot, died in 1998. Shortly thereafter, what remained of his army defected to the government troops they’d been fighting for two decades.

The two-hour taxi ride from Siem Reap is fast and smooth, departing from a handful of informal taxi stands in the city — just tell any tuk-tuk driver you want to go to Anlong Veng. Prices in January 2019 were $40 for a whole car, or $10 for a front seat in a shared taxi.

The taxi drive goes past Banteay Srei temple and the sub-aqua carvings of Kbal Spean before entering the endless acres of farmland that have replaced the thick forest that once protected the Khmer Rouge from government troops. 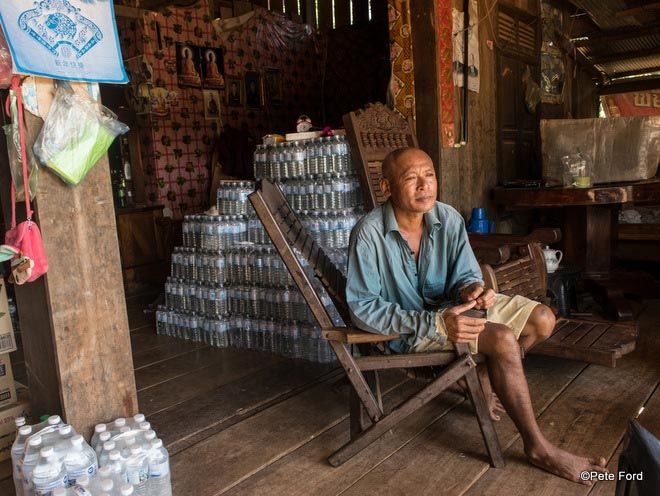 A former Khmer Rouge soldier watches the road outside his house.

Anlong Veng is small, centered on a roundabout featuring a statue of a dove donated by Prime Minister Hun Sen. A handful of restaurants, guest houses, and MFI branches offer nothing particularly exciting for visitors, but waiting by the large tourist information sign at the roundtable — spoiler, it’s all about the Khmer Rouge — were a gaggle of motorbike riders ready to take visitors around the sites in town and up onto the Dangrek Mountains for the area’s most interesting attractions.

The new information boards in English and Khmer have been installed by the fantastic DC-Cam, whose mission is to research and educate about the history of the Khmer Rouge. The boards starkly explain the fanatical regime’s genocidal rule over Cambodia.

Along the road north from town to the Choam–Chong Sa-Ngam border checkpoint, 15 kilometers away, the first stop in our Khmer Rouge sightseeing tour was the town house of Ta “The butcher” Mok, the one-legged former senior Khmer Rouge commander and army head. Known for his brutality, extreme even by Khmer Rouge standards, he died in custody in 2006 before being brought to trial. 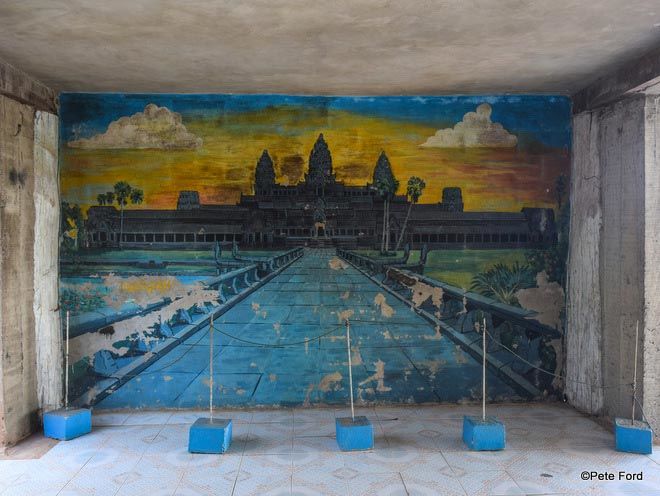 One of the many colourful murals adorning the walls of Ta Mok’s lakeside house.

The colorful murals on the walls of his house depict animals, forests, and Angkorian temples — including the Preah Vihear temple, 90 kilometers to the east, a source of conflict between Cambodia and Thailand. The murals offer a fascinating glimpse of how Ta Mok understood Cambodian history and his place in it.

From Ta Mok’s house north, the road leads past houses and fields and a few more sites of Khmer Rouge history, including the remains of some stone carvings of soldiers. Then it climbs up into the Dangrek Mountains to the international border crossing, the site of Pol Pot’s cremation in 1998.

The man who oversaw the murder of hundreds of thousands of his countrymen died suddenly, which gave rise to rumors that he himself was murdered. With government troops closing in on the Khmer Rouge redoubt, Pol Pot was placed on a pyre of old tires and given a hasty send-off, an unceremonious end to one of modern history’s most infamous men. The site remains a very modest memorial, with a simple tin sheet roof covering the sandy ground. But a freshly roasted chicken and other offerings showed that for some Cambodians Pol Pot is still a figure to be venerated.

Incongruously, right next to the cremation site is a huge new casino hotel that towers over everything. The Sangam Resort and Casino’s brochure describes it as an “exciting gaming and relax venue” and lists 14 historic Khmer Rouge sites in the area that guests can visit when not at the gaming tables. The resort has none of the glam and glitz of Phnom Penh’s Naga World, and an atmosphere of desperation at Sangam is clear. I witnessed one young man pawning his gold wedding ring for more chips.

But the accommodation was surprisingly comfortable, at $22 for a twin room with air-conditioning, attached bathroom, buffet breakfast, and a buffet dinner for $5 extra. But no wi-fi. Although it’s illegal for Cambodians to visit the resort, I saw a few mingling with the Thai tourists filling the casino. With its ornately carved wood paneling and its landscaped gardens, complete with a Christmas tree in January, the hotel is worlds away from the simple houses and huts outside the resort’s high walls and the area’s brutal history. 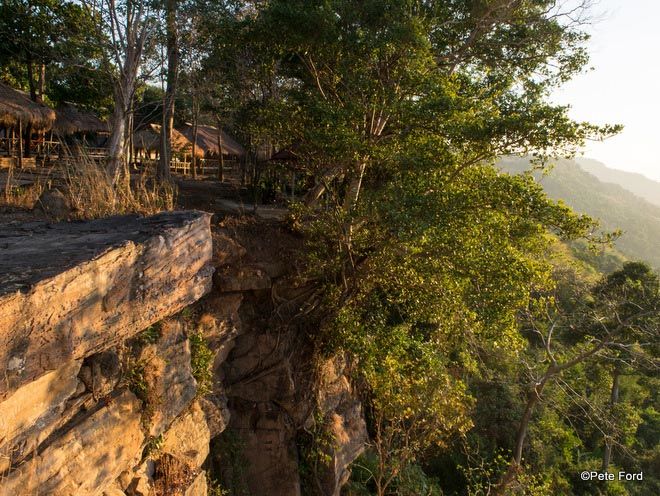 A few kilometers further east is the Anlong Veng Peace Center, housed in another of Ta Mok’s houses, along with a local guest house and restaurant also occupying the grounds. At $8 a night for a simple room and bucket shower, the main draw is the stunning view from the top of the sheer cliff on site. Looking down as if from an airplane onto the flat farmland and scrub below, it is easy to see why the Khmer Rouge leaders chose this spot for not just its beauty, but its clear military advantage: any advancing soldiers would have been visible for miles.

The hammocks on offer, a constant breeze, and the lack of light pollution in this rural area make it a relaxed place to watch the stars, welcome the sunrise, and chill out, as far removed from the hustle and bustle of Cambodia as can be.

When you head east from the guest house, along the dusty single track that leads to the remote former house of Pol Pot, the poverty of the local inhabitants is evident. Most of them are former Khmer Rouge soldiers, now subsistence farmers who grow little more than enough to feed their young families. Much of the formerly dense forest has been cleared, both of trees and landmines, and replaced with modest plots of cashew, cassava, rubber and banana.The locals’ lives clearly remain simple and hard, the kind of existence not mentioned in Phnom Penh discussions of development successes. 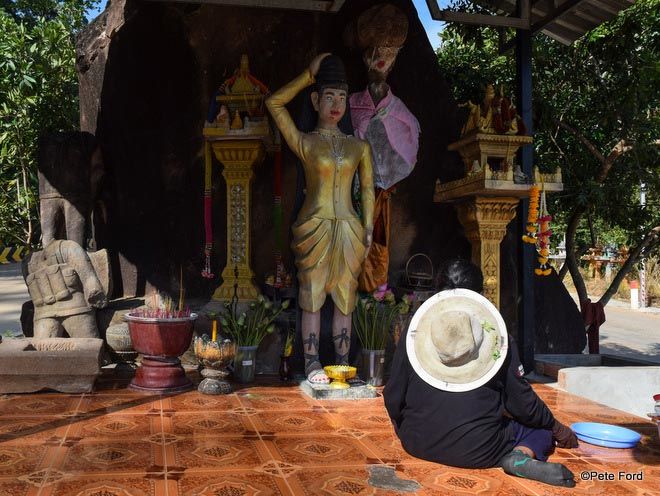 The remains of the Khmer Rouge statues carved into a boulder on the road up to the Thai border, now a Buddhist shrine.

I chose to walk the 25-kilometer trip to Pol Pot’s house and back, to get a better feel for the location and its inhabitants, and I’m very glad I did. The constant “hellos” from the many children playing along my route, and even from the guards of the military outposts, help to ease the tension I felt being where the last remaining Khmer Rouge diehards once ruled.
As I walked I was able to have short conversations, shake some hands, and grab snapshots of life along this remote border, far from the luxury cars and villas of the capital. For those with less time or energy, it is easy to hire a motorbike driver for the journey for $10 to $15, depending on your bargaining skills.

Pol Pot’s house itself is anticlimactic, for a small brick room is all that remains of what was clearly a bigger structure. The location again was chosen for its views over Cambodia below. But its remoteness in the forest conjures up images of an increasingly paranoid old man, beset by perceived intrigue and rivalry as the Cambodian military drew ever closer.

Walking back toward the border checkpoint, past faded Halo Trust signs marking cleared minefields and small shops selling Thai bottled water, Thai Coca-Cola, and Thai cigarettes, I reflected on the fascinating contrast between modern capitalism and the ultra-communist ideology that once held sway in Anlong Veng. Much has changed, but much else hasn’t. Which makes a visit to Anlong Veng all the more interesting for anyone who cares about Cambodia’s history and its future.

Getting to Anlong Veng and practicalities:

Various websites make vague mention of daily morning buses to Anlong Veng, but none are currently running as of February, 2019. But shared taxis were easy to find with the help of tuk tuk drivers, and the two-hour journey was $10 for a front seat. Getting back to Siem Reap was also straightforward.

From Anlong Veng, shared taxis east to Preah Vihear were also available, making it possible to see the stunning mountain-top Angkorian temple in a loop from Siem Reap.

Khmer riel and Thai baht are the preferred currencies, and it’s better to have any U.S. dollars in smaller denominations. This close to Thailand, the food is also somewhat spicier than is usual for Cambodian cooking, so watch out!

4 Responses to A visit to Anlong Veng, the last Khmer Rouge stronghold