Posted on December 27, 2012 by Marissa Carruthers
Get a quote for expat health insurance

Marissa Carruthers is a freelance journalist who left behind life in the UK for the sun and smiles of Cambodia. In her column, she shares the ups and downs of settling into life in Phnom Penh as a new expat. 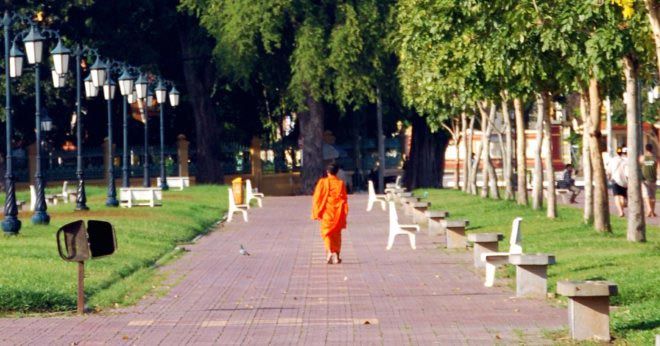 A monk takes a cool walk through the park.

Santa delivered the best Christmas present ever to Cambodia a few days early when the temperature finally dropped.

After weeks of being reassured the cool season would land within the next few days, I either trudged on painfully through the sticky heat or became a prisoner stuck in the confines of an aircon-cooled room.

Then at the weekend, I woke up and suddenly the temperature had changed. A cool wind blew and I actually managed the walk to get my morning coffee without breaking into a sweat.

Once I got inside and the daily chorus of “good mornings” were out of the way, one of the waitresses asked me if I was cold.

I struggled to stifle my shock because, with the temperature still stuck in the early-20s, this was definitely not my definition of cold. “Cold? Are you cold?” I asked to double-check I’d heard her right.

Later on that day, the security guard at my apartment block had the same complaint. “Very cold,” he said shivering as he wrapped his arms tightly around himself while I remained comfortably warm in my shorts and t-shirt.

Despite Cambodians complaints about it being too cold, I’ve relished in the drop in temperature.

On Christmas Eve I was able to enjoy drinks with a fresh breeze to cool me down rather than an army of cranked up fans and on Christmas Day, I walked off the hefty portion of turkey with all the trimmings that I’d scoffed at Paddy Rice’s along the riverside without dripping in sweat.

And best of all, finally the frizz that’s plagued my hair ever since stepping foot in Cambodia has disappeared. Long live the cool season.

One Response to Cool Cambodia