Expat Q&A: “I literally tore up my return ticket back to England”

Posted on March 17, 2014 by Lina Goldberg
Get a quote for expat health insurance

In this series we talk to Cambodia expats about what they know now that they wish they had known when they first moved to Cambodia. This week we talk with British expat Scotty Davis. 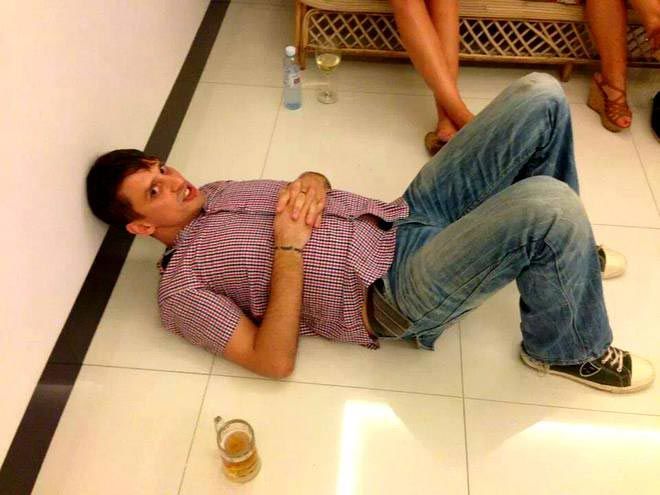 Scotty, appreciating a moment on the floor in Phnom Penh.

Scotty Davis is originally from Liverpool and decided to make Cambodia home five years ago. He spends most of his time doing stand-up comedy (look for Scotty Muldoon on the comedy club lineups) and fronting the indie rock band, the Teaner Terners — “the city ain’t gonna entertain itself,” he says. In terms of gainful employment, he also teaches English to young learners in Phnom Penh.

MTC: Scotty, how did you end up an expat and what do you wish you had known before you moved to Cambodia?

SD: “I’ve been living overseas as a British national for 11 years now. The vast majority of which have been spent in Asia. Kanchanaburi, Thailand, was the first port of call that I chose to drop anchor and embark upon a life of expattery. The cognitive rationale—or, to be more accurate, the flimsy excuse—that drove my decision to make the initial leap into an unknown cocktail of existence that, in those early days, consisted of, but was not limited to: sweating profusely, listening to pretentious expats trying to out-knowledge each other on obscure local geography, the unremitting confusion of all external stimuli, not to mention the frustrating mental burnout brought on by the ever shifting immigration laws, fees, and paperwork related to procuring visas and work permits, was, I swear, to save money on airfare.

I returned to Liverpool after each of my backpacking adventures around Southeast Asia and knew that I would keep flitting back and forth between the two regions, such was my attraction to these newly encountered and fantastical lands I’d discovered. It was like an entirely new reality with different freedoms to explore; a reality without the narrow-minded social narrative that seemed to sully peoples’ opinions. And so, during one of my travels, I made the decision to stay put in Thailand and literally tore up my return ticket back to England.

A number of years later, after relocating to Hong Kong, I visited Cambodia on a short trip and couldn’t help but immediately identify with its gritty personality and no-nonsense nonsense (I realise that sentence doesn’t make sense but that’s my point!). I only spent 10 days in country and knew I wanted to return some day. Eventually, circumstances dictated that I was in a position where I was able to make a choice of where to move to following on from Hong Kong. It was a no brainer, really. Within hours my ticket to Phnom Penh was booked. That was almost five years ago.

Because of my time spent living in Asia, coupled with the fact that I had already visited Cambodia, when I eventually made the permanent move to reside in Phnom Penh there was no difficult period of adjustment or unexpected culture shock on my part. Plus, I also had a couple of friends who were living here already when I arrived, and, being a gregarious person, it didn’t take long to feel like a part of the social fabric of the city.

11 years on from my decision to turn my back on my homeland and I still sweat profusely. The confusion of external stimuli reached a plateau and then tailed off, not unlike the tuning out of white noise after a prolonged period, and also because I became a more confusing, complex person myself, thus I must have met it somewhere in the middle of the chaos scale. Obtaining visas became easier over time through practice and patience. Here in Cambodia, though, you don’t even need practice at visa applications or, surprisingly, patience. Just currency. And now, true to form, I have discovered through the self-reflection of writing this summary of my time here that I am indeed now one of those pretentious expats trying to out-knowledge other expats on obscure local geography.

So, back to things I wish I’d known when I first moved to Cambodia that I know now:

I’m not a gambler but back in 2009, if I knew the major sports results that have happened in the interim, I would have placed bets on all those games I could remember the results of, cashing in like Biff in Back To The Future II. Only without a DeLorean.

During the first couple of years here I exclusively only got 3-month visa extensions. I hugely regret this. My advice is only get 12-month extensions—six months minimum—even if it puts you out of pocket for a short time. All those 3-month visas rapidly take up space in your passport and renewing a British passport in Phnom Penh is very costly. Not only that, 3-month visas are not multiple-entry, which effectively self-imprisons you within the Kingdom’s borders whilst your friends go on holidays to Thailand/Vietnam/Laos while you remain at home, too proud to renege on the 2.5 weeks you have left on your visa. But then of course you end up going with them anyway, invalidating those 2.5 remaining weeks and then have to buy a new visa on re-entry. If you want to follow in my footsteps and still not learn a single thing from this futile exercise, do what I did and extend that reluctant visa by only 3 months again.

Trust me. It’s cheaper in the long run and more convenient to extend your visa as long as possible.

Had I known, when I first moved here, about these annoying little sh*ts that needlessly weave in and out of traffic on their Scoopys/Finos, putting peoples lives at risk whilst simultaneously trying to fix their Rod Stewart-esque hairdos in their wing mirrors at 80kph, I would have immediately gone out and bought an old, clapped-out, run-down, disgustingly cheap motorbike, taped myself up in foam padding and bubble wrap and rode around the streets of Phnom Penh hunting down Freshie Boys.

As soon as I’d have spotted a Scoopy/Fino with the obligatory two or three Freshie Boys mounted upon their motorized steed, I’d have tailed them until they inevitably committed an act of gross stupidity, rode up alongside them, let them laugh at my regalia and rusty motorbike for a second and then… BAM, jumped off of my speeding vehicle and taken the lot of them out with a double clothesline. I’d have walked away unscathed, dusted of my dented, old motorbike and got back to work finding another gaggle of Freshie Boys to educate on traffic etiquette. You know what? I still might do that. Just wish I’d have started earlier.”