Expat Q&A: Just how charming Phnom Penh can be

Posted on January 14, 2013 by Lina Goldberg
Get a quote for expat health insurance

This week we hear from Andy Wenhlowskyj who moved to Cambodia in late 2010. He works as a business development manager with an Australian firm creating supply chain solutions for Australian retailers. 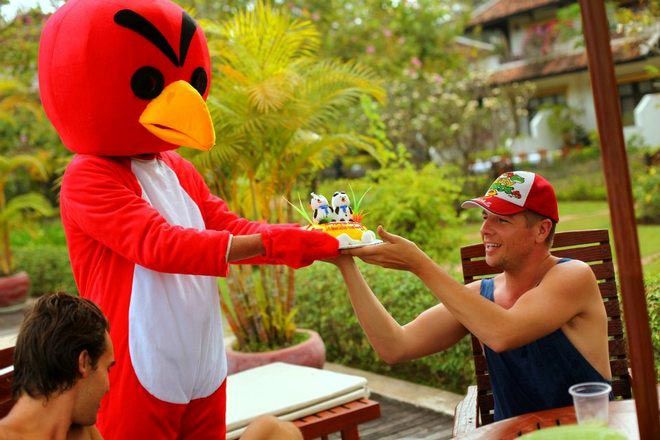 Andy enjoying one of his favorite aspects of Cambodia: the angry birds.

MTC: Andy, what do you know now that you wish you had known when you first moved to Cambodia?

AW: “I wish I’d known it was dog soup before I’d devoured the whole bowl. 4 a.m., surrounded by tuk tuk drivers after a heavy night on the turps, the mystery soup came out as a snack alongside the jugs of beer we were chugging. They all had a great laugh as soon as I’d finished my soup and was innocently digesting dog protein.

I wish I’d known a lot more Khmer. “Can I get the ket loi please?” “Pull a bot saddam just here. Thanks, mate.” “I’ll have an Anchor Draft, mouy,” are all examples of how pathetic my Khmenglish was for a while. When I arrived people told me it was fine to speak English everywhere, and it helps Khmers improve their English skills with you. Pffft, what a slack excuse! Start learning the language and you’ll see that there’s much more enjoyment for both you and a Cambodian to reciprocally exchange language tips with each other. “Sok sabai?” “Sai sabok!”

I wish I’d known that what I considered to be enforceable traffic laws back home–such as obeying traffic lights or driving on the correct side of the road (or even on the sidewalk)–are considered to be mere recommendations for safe travel in Phnom Penh. You’ll be fined for more serious violations, though, like having your headlights on during the daytime, beeping your horn at night, and pulling a U-turn in the only opening of a road fence which has forced you two kilometres further than you had to go. Remember the big Lexus SUV (especially the one with red and blue registration plates) always have right of way–don’t test this one out, just get out of the way. Traffic at times may seem chaotic, yet it just works. You’ll notice there is no road rage here; be patient and just go with the flow, you’ll get to your destination just fine. DON’T DRINK AND RIDE. It’s so easy to get a tuk-tuk, just make sure your driver is sober as well.

I wish I’d known to master using the bum gun. I spent many visits to the throne just staring it down like I was confronted by a poised cobra, too scared to move or take my eyes off it. Everyone should try the bum gun. If you have no idea what to do, just ask someone you’re comfortable talking about your number 2s with. It’s also a handy tool to spray off your Pontoon feet, or after that awkward moment when you accidentally step into curbside rubbish juice. 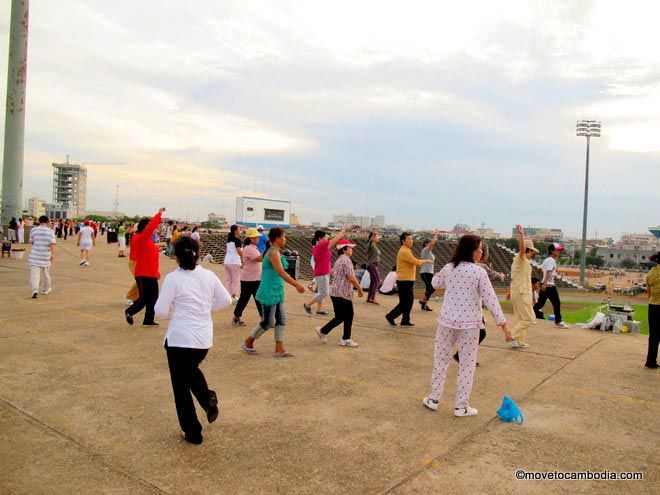 Sunrise and sunset are the best times to join in Cambodian aerobics.

I wish I’d known that sunrise and sunset is when you see just how charming Phnom Penh can be. Whether you’re coming home from a big night out or you’re just a natural early bird, you can see the city wake and swing into action from around 5 a.m. The air is cooler, people are heading to work or settled into their favourite street-side breakfast joints. This is the best time to get some grilled BBQ pork and rice down the hatch.

For sunsets, there’s even more activity going on: join a high-energy aerobics class held in the city parks, or for some tamer exercise have a hit of badminton, walk some laps around Hun Sen Park, or try your skills at Sey (Phnom Penh foot shuttlecock) on the riverside.

I wish I knew the formula to winning Connect Four or the dice game. Howie’s is a top after hours bar on Street 51 where everybody knows your name. You can play both of these games with the friendly staff. It’s a fun way to start or end your night. Good luck ever winning.

Finally, I really wish I’d known that sweat just happens to be a part of everyday life here. Embrace it. It’s healthy.”

2 Responses to Expat Q&A: Just how charming Phnom Penh can be