Posted on December 24, 2012 by Lina Goldberg
Get a quote for expat health insurance

This week we talk to Ramon Stoppelenburg. Originally from the Netherlands, Ramon has been in Cambodia since 2010 and has no plans to leave anytime soon! 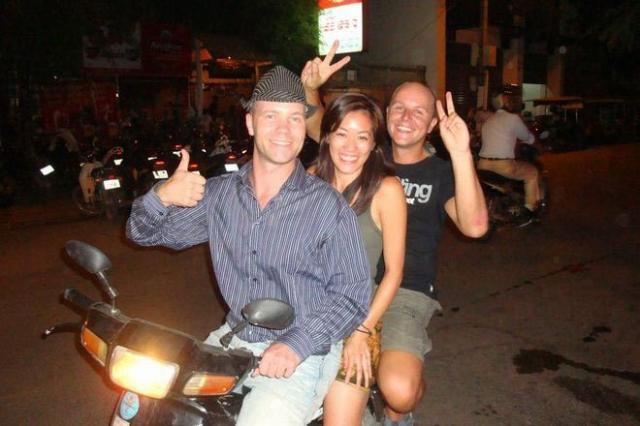 MTC: Ramon, what do you know now that you wish you had known when you first moved to Cambodia?

RS: “When I decided to move to Cambodia for the obvious reasons of the tropical temperature, great food, fascinating, friendly people and less hard work for less necessary bucks, I didn’t know about the giant black hole I would fall into within the first few months.

Once you make a big move–a giant change in your life–you’ll get great support by everybody who you have left behind and whom you can contact on a daily basis by Skype or even in real-time by Facebook and Twitter, but you are still a new arrival in a new city, possibly in a newly-rented apartment and with a decent internet connection. You are safe, set, but still new.

In the first weeks I met up with loads of ‘Western’ friends, as those are the most easy ones to connect with if you don’t speak Khmer. I met them at the coffee shops, where they all used the WiFi and wrote their thesis, human rights reports, blogs and novels. They were teachers, volunteers, tribunal interns and waterpump installers.

And after three months of hanging out with them, my new friends, I was invited to all their parties. Sounds great, right? But I was invited to their Goodbye Parties. Their times were up, the contracts finished, the school seasons ended and they loved to go back home again. Back to civilisation. Thank you, Cambodia.

And in comes the black hole I started about.

Suddenly I realized I had made the wrong friends. They were great friends, but for someone who actually moved here with the intention to stay as long as the temperature stays up, the food is great and the people friendly, they weren’t the people I should have hung out with.

After a few months in Phnom Penh I had to start all over again. That’s when I extended my social network by actually meeting and hanging out with like-minded Western people who own bars and manage restaurants. (They also taught me to forget me about ever wanting the run a bar, restaurant or guesthouse. Too many heartaches.)

And through them I met other people who’ve been living here longer then me and were not on a contract bases and also hated those damn Goodbye Parties. Goodbye Parties are for leavers.

After living here for five months I decided to take over The Flicks movie house on Street 95. The owners were selling it as one of them got a full time job and their hobby of running a movie house would become too much of a requirement for them. Me taking over a business in Phnom Penh woke up other long-term expatriates.

Suddenly a new social circle opened up to me. Suddenly there were the people who I had seen before, but never really connected with. Ends up it was their choice: they didn’t know if I was one of those short-termers and not sure if they should invest time in a new friendship. As a new business owner, it all made sense to them: I was going to stay here for a while. I was okay.

And there were the dinner parties on roof tops, the boat rides on lakes and rivers, the weekend getaways and the regular cocktail nights. With the right people.

I have not become like my many of new long-term friends in Cambodia as I still like to meet people who are here only for a short time. But I know how to handle them now. Have fun hanging out while you are here, but never – NEVER – invite me for your Goodbye Party.”

You can learn more about Ramon (and the novel he’s writing) at his personal site. If you want to meet him in person (he’s practically a celebrity to Dutch people) or just want to kick back, relax and take in a movie, be sure to check out The Flicks for a fully air-conditioned, cinematic, popcorn-y experience.