Posted on July 15, 2013 by Lina Goldberg
Get a quote for expat health insurance

In this series, an offshoot of our Expat Q&As, we talk to expats that have been living in Cambodia for years and years about how the country has changed since they arrived. The (sometimes grumpy) old timers of the expat scene have the best stories to tell, and this week’s expat, Irish national Brian Dee, is no exception. 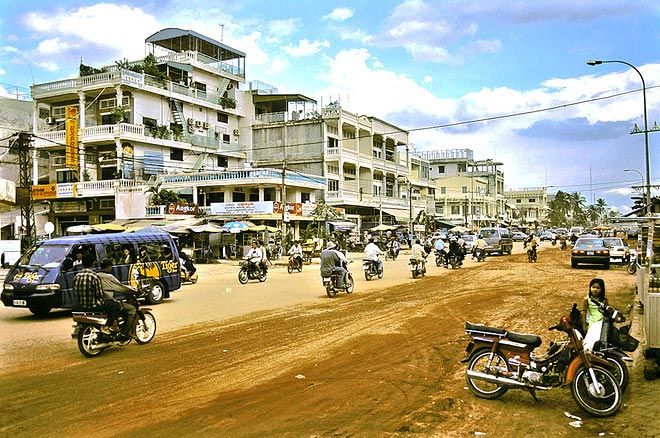 Phnom Penh, when the streets were paved with gold. Or dirt.

Brian Dee first visited Phnom Penh in 1999, as part of a tour of the region. He has been living here permanently  since 2005, and in that time he’s seen a lot of changes.

MTC: How has Cambodia changed since you first visited in 1999 and when you moved here 8 years ago?

BD: “Phnom Penh is almost unrecognizable from how it looked when I visited first in 1999. Back then, the city was quite a dingy place. Most of the side streets were unpaved and covered in potholes, which meant that motorbikes had to go a lot slower. There was very little street lighting, so it was very dark at night and not many locals seemed to go out after dark. There were no traffic lights, so even though there was nothing like as much traffic, you’d get these incredible mash-ups at intersections. There didn’t appear to be many cars other than old Camrys or white NGO 4WDs. There were no tuk tuks, and Honda Cubs and Daelims were the main form of transport. The only “big” bikes were Honda Degrees ridden by foreigners.

There were derelict houses dotted around town, usually with squatters living in some corner of them and fires burning in the yards. A whole lot more people were living on the streets, I remember looking across from the Sharky’s balcony and about 100 people slept along that stretch. It was uncommon to see any respectable woman out at night. 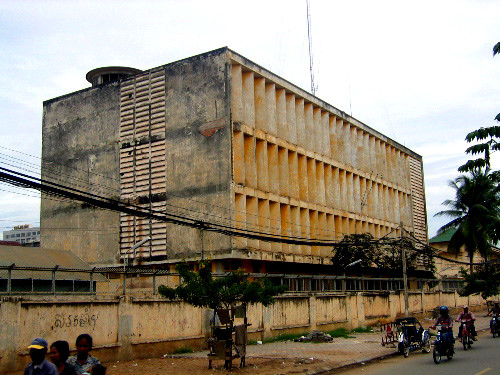 The old police station on Rue Pasteur where Golden Sorya Mall now is.

There weren’t very many bars around, and there were major distances between them which didn’t seem safe to walk. From what I’ve been told the place had calmed down a lot in the past few years and was much safer than it had been in the 90s.

By the time I came here to live in 2005 it had changed a lot from those days, there were far more businesses open in the evenings and many more people out and about at night. It was still a very conservative place and the only women you’d see wearing anything other than long skirts were sex workers. 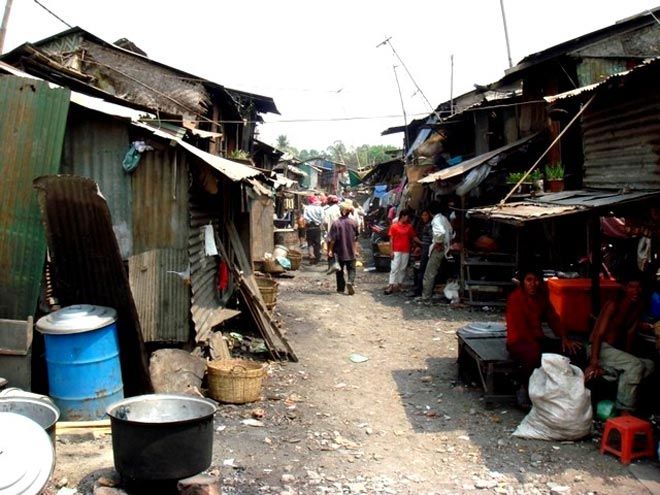 A Phnom Penh slum from the early aughties.

In 2005 there were massive slums around the city. Koh Pich had just been evicted, it was farmland back then but they’d fenced it off and put up watchtowers to prevent anyone from returning. Nearby were thousands of wood and corrugated iron shacks in the Tonle Bassac area. A lot of the shoe-shine boys, glue-sniffers and street-walkers came from that area. I had been a volunteer in the area and I knew many people who lived there so I spent quite a bit of time around the place. There was a karaoke shack where the Australian Embassy is now, and I spent many good evenings there. All those slums were evicted between 2006 and 2008 and the people were packed off to the sticks. 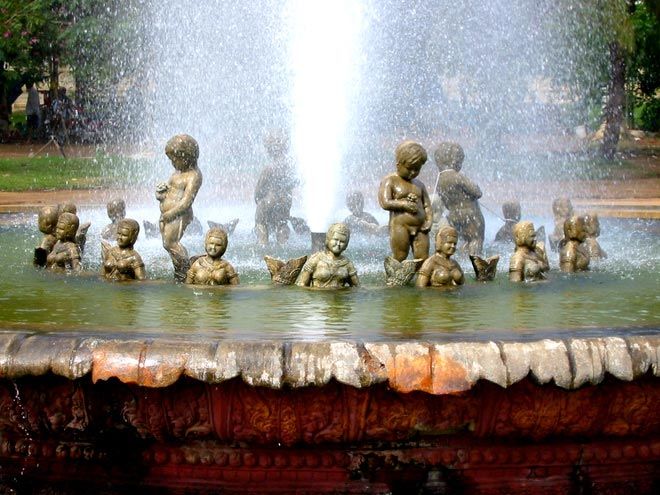 Wat Botum Park, back in the day.

The city had very few buildings higher than 5 floors, and although many streets had been paved, it wasn’t unusual to find muddy, rutted ones. There were three outdoor stages around town, one in the Tonle Bassac slums, a small concrete bowl-shaped one in Wat Botum Park and a big one where the night market is now. These were popular places for local people to watch shows at in the evenings. All the parks were quite decrepit places then. The Wat Botum park was very dusty and the trees where the children’s playground had squatters living under them. Where the children’s playground is at Wat Phnom were a load of shacks selling coffee and telling fortunes. There were a lot of street-walkers plying their trade in the evenings around all the parks, even right up near Independence Monument it’s quite surprising how pleasant they have become. The Riverside was quite a mess, and the quay opposite Psah Chas had collapsed. 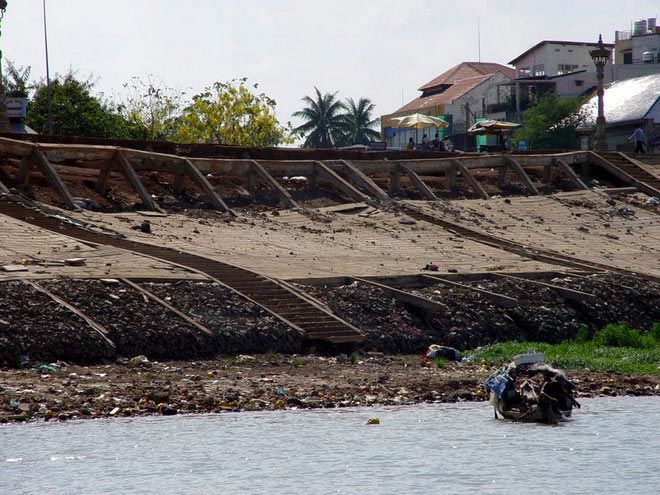 Collapsed Sisowath Quay in the aughties.

Nowadays Phnom Penh is a much more modern-looking city. On the downside, there is an awful lot of ostentatiousness which wasn’t so apparent before. The city has become unaffordable for anyone with meager means.  I’ve concentrated on the capital because it’s where I spend most my time, some things have changed in rural parts, but not in such an obvious way as here. I still like this city a lot, but can’t help feeling that much of what I originally liked about it has disappeared. “